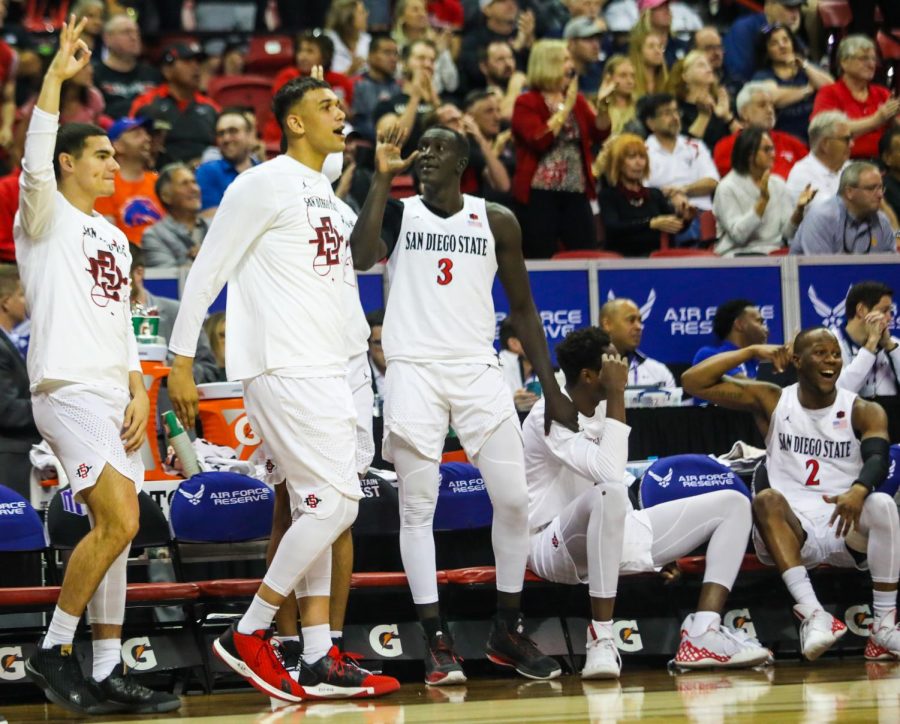 The Aztec bench celebrates during its 73-60 win over Air Force in the Mountain West tournament quartfinal at the Thomas and Mack Center on March 5.

The coronavirus has caused cancellations that San Diego State men’s basketball could have never imagined. Its magical season of going 30-2, with a chance to make a deep run in the NCAA Tournament was gone in a blink of an eye.

Following the Aztecs’ name being announced on March 15 for Selection Sunday, ESPN was supposed to send college basketball sideline reporter Allison Williams to cover the team’s reactions. ESPN hasn’t done a feature on the program since its 2014 “Steve Fisher Wired” segment going into the NCAA Tournament.

The network’s first feature on the Aztecs men’s basketball team was back in 2011 — discussing how Steve Fisher got the Aztecs back on the national map.

As disappointing as this might be for the Aztecs, Williams was also saddened.

In the group interview with other ESPN sideline reporters Kris Budden and Molly McGrath, Williams was asked, “Who were the players that you’re really bummed you never got to see shine on that stage?”

“Honestly guys, I was so bummed for San Diego State,” Williams said on the Facebook live.

Despite the historical season the 2019-20 Aztecs had, they were hungry for more. Being the last undefeated team at 26-0 and ranked No. 6 in the final AP Top 25 Poll wasn’t enough for them.

SDSU wanted to make a statement.

The Aztecs wanted everyone in the nation to know their name and give them the respect they feel like they deserved.

That attention might have finally came when Williams was scheduled to visit SDSU’s campus to cover the team.

“I was going to be there on Monday, the Monday after Selection Sunday, covering them,” Williams said. “I could not wait to get to know these guys, share their stories and give them that big spotlight that I felt they really deserved.”

It was difficult for college basketball fans on the East Coast to ever see the Aztecs play due to late tipoff times.

A normal Aztec game on CBS Sports Network would tipoff around 7 p.m. — sometimes even as late as 8 p.m. Pacific Time. On the East Coast, games wouldn’t start until 10 p.m. or 11 p.m., when most people were getting ready for bed.

The spotlight was about to be on the Aztecs as the NCAA Tournament was quickly approaching. The team would have its chance to finally show the nation what they were really made of.

On CBS’s nationally-televised Selection Sunday show, college basketball fans were going to see the Aztecs’ name announced for what was expected to be a No. 2 seed in the West Region.

“You get to really see what these teams are made of that you have some questions about during the regular season,” Williams said. “I was heartbroken for them, and I don’t even know those guys.”

This Aztec team had arguably the best year in program history.

Fans will forever remember it as the last remaining undefeated team in college basketball, the map champions and the team that holds a 30-2 record.

“I just feel like (SDSU) and Dayton could have really had some special runs in the tournament,” Williams said. “It was all kinda coming together for them. Veteran teams, really good chemistry and you just don’t get a chance to see what would have been for them.”

Joey Loose, who authored the famous maps through the college basketball season, has been doing daily polls to figuratively crown an NCAA champion. In his polling, the Aztecs would have played in the national championship game against Auburn and eventually lose to the Tigers.

Aztec fans will forever wonder what really could have been. 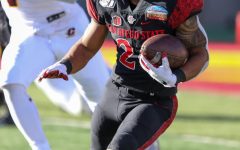 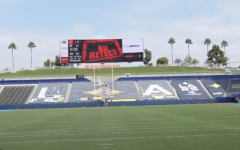 Column: Dignity Health Sports Park is a sneak peek into the future with Aztec Stadium 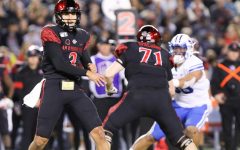 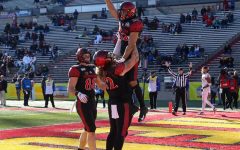