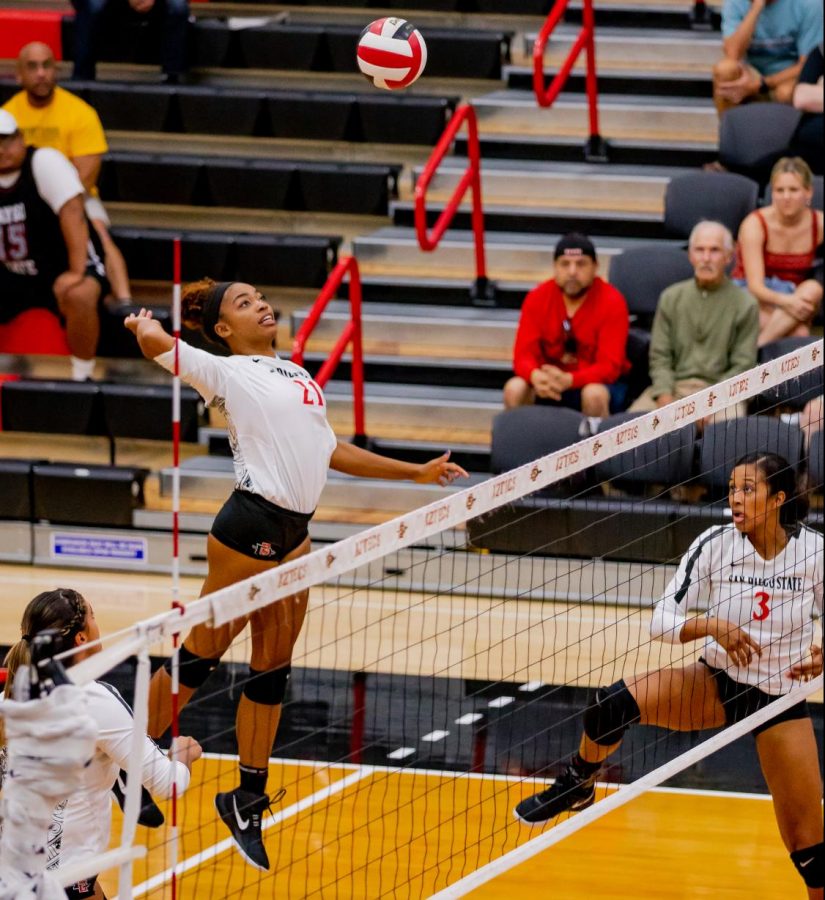 Then-sophomore outside hitter Victoria O'Sullivan prepares to spike the ball during the Aztecs' 3-1 win over UNLV on Oct. 3 at Peterson Gym.

The offseason for San Diego State volleyball was already abnormal with the hiring of new head coach Brent Hilliard seven months ago. Things only got stranger.  Six weeks into Hilliard’s tenure, team practices could no longer be held because of COVID-19.

For junior outside hitter Victoria O’Sullivan, those six weeks were something she had to take advantage of.

The Daily Aztec talked to the Albany, California native about how she is staying in volleyball shape and adjusting to her new coaches.

Daily Aztec: How are you and your family doing right now?

Victoria O’Sullivan: “My family is doing well. I am doing well. My parents are both working from home, so it’s good to have a little bit of time together that we wouldn’t normally have if I was at (San Diego State).”

DA: Looking back at last season, what were some things you took away?

VO: “Last season was a great growing opportunity for me because my freshman year, I did not play as much as I did last season. Being on the court all the time made me learn a lot of things about the game because, of course, you can practice all you want, but playing in game real time is really different. Getting that experience was really helpful heading into next season.”

DA: What have you been doing to stay in volleyball shape during this offseason?

VO: “Our rehab people have sent us programs to keep our injuries in check as well as our strength coaches have sent us workouts to do that we can incorporate into our daily routines to keep us in shape.”

DA: How have you been able to stay connected with your teammates although you meet physically?

VO: “Our team talks all the time. We have a group chat, we Snapchat each other, we’re all each other’s best friends, so it hasn’t been hard to keep in touch with them. We FaceTime each other every day.”

DA: This offseason has also brought the new addition of head coach Brent Hilliard, who coached at the University of San Diego. What is it like to have that experience come to SDSU?

VO: “It’s really great. It’s really refreshing to have a new set of eyes on our team, a new mindset as a whole. As soon as he came in, our team clicked with him immediately so I could already tell it could be a great start for our team.”

DA: During those six weeks of practice, how did you get to know Hilliard’s playing style?

VO: “He has a very charismatic personality, so he put that on us on day one. He told us what he would expect from us, what we should expect from him and it was exactly what he told us. Listening to him, his coaching style was not that hard to adapt to.

DA: When you heard of the new coaching hire, did you talk to other players that were recruited by him about who Hilliard was?

VO: “We had a lot of talk. (Junior setter Camryn Machado) was pretty much the only one who knew a lot about him, but it was all good things. Throughout the recruiting process, we were all kept up to date about where they were in finding us a great coach.”

DA: A core has been built with you, Machado, senior outside hitter Erin Gillcrist and a couple others over the last couple of seasons. What’s it like to see them come back and be part of that group heading into next season?

VO: “It’s great because when I was a freshman, they were still young and to see them grow with the team as well as me growing with the team it’s really comforting to know that we all came on this journey together and this season should really be great for both of them to show what they have working on.”

DA: Hilliard hired assistant coach Steve Timmons, who was the first male athlete to receive three Olympic medals. What does it mean to have a coach like Timmons that has Olympic experience?

DA: What’s the rest of your offseason looking like despite not knowing the future schedule?

VO: “First thing is staying in shape as well as I can even though we aren’t on the court playing volleyball, but doing everything I can while I’m at home. Also, staying in the right mindset. Remember what I’m at SDSU for, keeping that in the back of my mind. Hopefully we’ll be able to go back in the summer and start training.”