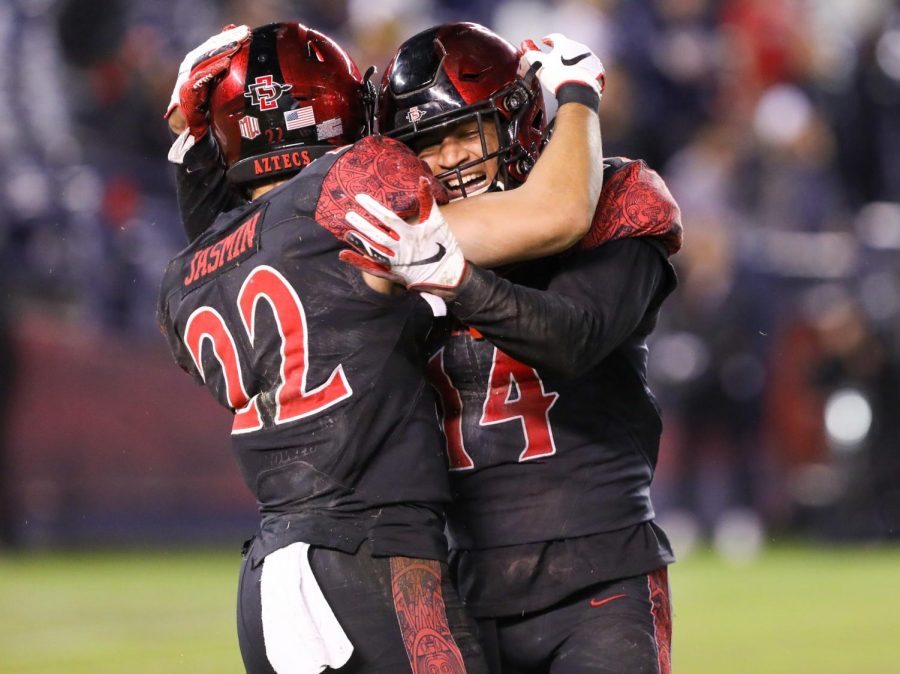 Then-junior defensive back Tariq Thompson and then-junior running back Chase Jasmin celebrate after a play during SDSU's 13-3 victory over BYU on Nov. 30 at SDCCU Stadium.

Over the past few weeks, San Diego State football players have been making their way back to the Mesa, if they hadn’t already left.

With fall camp looming, the Aztecs are anxiously waiting to get into the swing of things — especially since spring ball got canceled due to the COVID-19 pandemic.

Part of the preseason is predicting where the team will finish, but also seeing the individual awards.

In addition, junior running back Jordan Byrd was named to the Paul Hornung Award watch list, which honors the most versatile player in college football.

The Aztecs’ defense only gave up 11.69 points in 13 games last season, including the bowl game against Central Michigan in New Mexico.

Thompson said despite the loss of a few key pieces, there is still room to get better.

“We’re losing a big leader in (linebacker) Kyahva Tezino, but we have other players stepping up,” Thompson said. “We have a lot of seniors. We built a great chemistry over the winter and trying to get it back right now with a three month hiatus, but I definitely believe we have enough talent to improve from last year.”

“It’s an honor, those are great players,” Thompson said. “I feel like the accolades are awesome, but our team deserves more credit than what is shown. We have definitely great players on our defense that did not get the same credit and accolade that we have.”

Thompson, who is the first Aztec to make three different preseason All-Mountain West teams, said he is grateful to be part of the program as he prepares for his fourth and final season.

“It’s an honor and I didn’t expect to be here,” said Thompson, who grew up in San Diego and went to nearby St. Augustine High. “Without my teammates, my coaches and the overall committee here at SDSU, I wouldn’t be able to do what I’ve done so far and I feel like I have a long way to go to complete my senior season here.”

The Aztecs are projected to finish at the top of the West standings in the conference, but Thompson said he is more focused on winning the conference championship than hearing the predictions.

“It’s an honor, but it doesn’t mean much,” Thompson said. “We still have to put the work in. Our goal is to win the championship. The accolades will come if you work for it, but we have a long way to go. We haven’t done it in the three years since I’ve been here. It’s definitely something I’m looking forward to and a challenge I’m ready to accept.”

A key reason why the defense has been strong in the past has been because of the coaches.

For Thomas, he said it has been beneficial to learn from head coach Brady Hoke, who was the defensive line coach last season.

“I was lucky to have him for a whole year prior to him being head coach,” Thomas said. “I was able to get comfortable with him and he doesn’t take any slack on me. I love having him around.”

Part of playing any sport is being able to adjust to practices or games.

Even during the pandemic and no spring camp, the players have found other ways to stay in football shape.

Thompson said they have put a twist to at-home workouts to keep each other engaged.

“We were sent workouts that we could do on our own and a great part of our team is we have an accountability group,” Thompson said. “Each senior of their position groups checks in with their teammates and see if they’re doing the workouts and sending videos of themselves to inspire and make sure everyone’s doing their job.”

Thompson said it has benefitted the team to connect with each other and build chemistry before the Sept. 5 opener against Sacramento State.

Training was a little easier for Thomas because he had his older brother Zach Thomas — who is an SDSU senior offensive lineman — got to work out together at their home in Carlsbad, California.

“Lucky enough, we were able to scrap together a little home gym,” Thomas said. “It was nice to be back home with him, get that bond back together and be with my family. It was really nice.”

Right now, SDSU has scratched the game against UCLA on September 19 due to the Pac-12 Conference transitioning to a conference-only schedule, but are still on track to face the Hornets in six weeks at SDCCU Stadium.