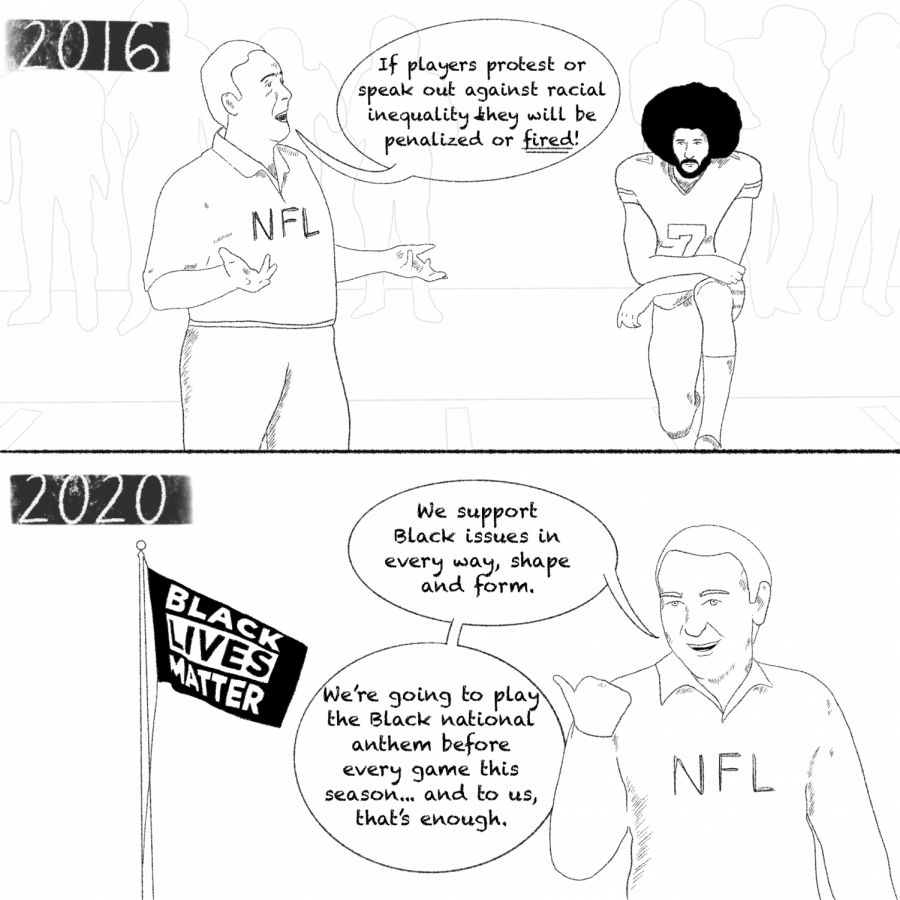 NFL Commissioner Roger Goodell announced in July that fans can expect to hear “Lift Ev’ry Voice And Sing”, traditionally known as the Black national anthem, to be performed live or played before every Week 1 NFL game. The plan is for the song to be played before “The Star-Spangled Banner.”

“Lift Ev’ry Voice and Sing” is a symbol of Black life, a celebration of a tumultuous experience; the struggle and triumph, the joy and pain of being Americans. The song was originally a poem, written by historian, author and civil rights activist, James Weldon Johnson.

Folks are infuriated that the NFL is not addressing systemic racism, police brutality and the Black Lives Matter movement seriously. The league’s decision to respond to the unprecedented times with the singing of “Lift Ev’ry Voice And Sing” before the national anthem for the first week of the season before each game commences, can now be added to the growing list of insincere apologies and empty promises.

Many people have shared their opinions and feelings on the league’s decision but the predominant question that people are asking is “why?”

Even Golden State Warriors guard Stephen Curry also spoke out on social media and said, “What is that going to do?”

Black Americans have been asking for justice and equality for over 400 years and instead of addressing these issues and the league’s own racist history, the NFL believes singing “Lift Ev’ry Voice And Sing” for the start of the season is the optimal way to honor victims of police brutality and systemic racism.

The league is considering a variety of other initiatives for the upcoming season to recognize victims of police brutality, such as including on-uniform elements like names of victims on helmet decals or jersey patches, educational programs and storytelling in the form of public service announcements about victims and families during broadcasts.

Although the NFL may aspire for the additions to the pre-game ritual and uniforms to bring forth change, they won’t. Laws will not change because of this. Murderers won’t be prosecuted. Lives taken mercilessly at the hands of the police will not be resurrected.

On one hand, symbolism can be a powerful thing and Black Americans in one regard may see this as an endeavor by the NFL to acknowledge and bring attention to the racism in the country and the league’s own flawed history.

However, the NFL has had an abundance of opportunities to be on the right side of history. The league could have supported former San Francisco 49ers quarterback Colin Kaepernick, who began to actively yet peacefully protest corrupt criminal justice systems, racial inequalities and police brutality in the nation alongside others, by kneeling during the singing of the national anthem nearly four years ago.

Kaepernick sought to bring about change and conversations within the league but was left unemployed.

Only two months ago did the league release an apology of sorts, admitting that “it was wrong for not listening to NFL players earlier,” only after demands by more than a dozen players, including SuperBowl MVP Patrick Mahomes.

In this tidal wave moment of change, the NFL is providing things Black Americans didn’t ask for instead of making a monumental shift in the league by addressing the reality that there are only three Black head coaches, two Black general managers across a 32-team league that is over 70 percent Black and has never had a Black majority owner.

Not to mention, a dozen owners of NFL teams have supported President Trump by contributing money or hosting fundraisers. Trump’s words, actions and Twitter account can testify to his racism as well as mocking NFL players who took a knee, suggesting that they shouldn’t be in the country or deserve to be professional athletes.

If the NFL wants to send an unequivocal message that its new policy is authentic and not performative, the owners must make radical changes and it must start with this political disconnect. It is impossible to walk in opposing directions at the same time and supporting President Trump is the complete opposite of supporting the players.

A recent pledge of the NFL and its team owners to contribute $250 million over a span of 10 years to criminal justice reforms in attempts to fight systematic racism is not enough. Nor is honoring victims of police brutality with helmet decals and jerseys.

Radical change is truly needed. Seeing and hearing “Lift Ev’ry Voice and Sing” during the NFL’s opening week will be an educational experience for those who are not familiar with the song. It will also be a moment for Black Americans to feel a spectrum of emotions — pride may very well be one of them.

Yet, what many still really want is for league officials and team owners to finally get it. A number of them do but as in football and in the world of sports, good intentions don’t win games — performance does.

The NFL must step up to rewrite a withering and outdated playbook, one that keeps pace with the changing times.

Trinity Bland is a junior studying television, film and media.