"Aztec Nights" brought in Tiffany Haddish and Joseph Tran for "A Night of Laughter" on Sept. 5. 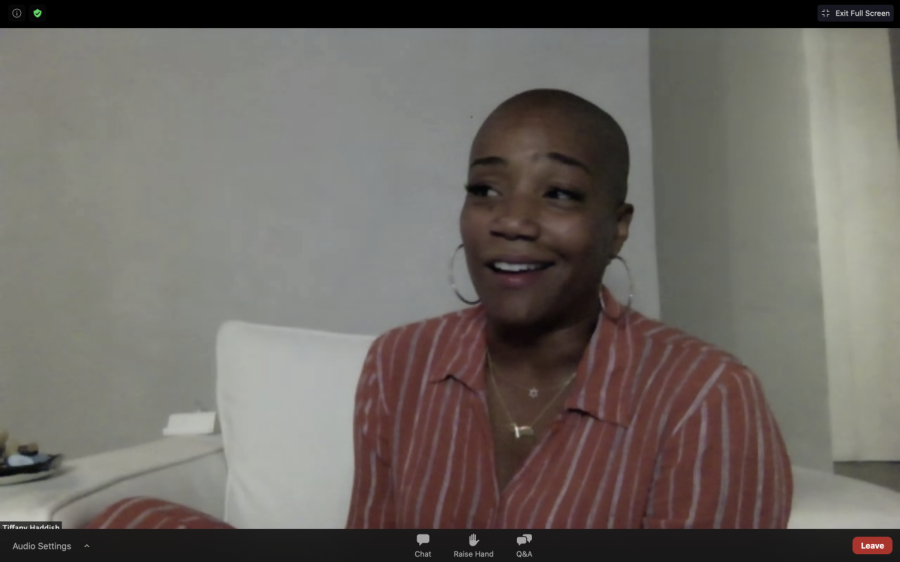 Tiffany Haddish gets candid about her upbringings and dealing with COVID-19.

While students continue adjusting to online classes and searching for safe entertainment, Aztec Nights presented Aztec Comedy Night, promoted as “A Night of Laughter” full of virtual comedic fun and a chance to earn lots of great prizes on Friday, Sept. 5.

Even with the current restriction on in-person gatherings, Aztec Nights is not letting the COVID-19 pandemic stop them from bringing students together for lively activities.

The main event of the night was a candid Q&A session with renowned actress and comedian Tiffany Haddish on Zoom. Appearing from her home with a shaved head and her infectious confidence, Haddish answered questions for nearly an hour in a spirited conversation moderated by a panel of Associated Students officials.

Haddish spoke in length about her upbringing in South Central Los Angeles and told many interesting stories, including how she met rapper Xzibit, being friends with Kevin Hart before he became famous and her experience filming the popular 2017 film “Girls Trip.”

During the session, Haddish revealed she had tested positive for COVID-19 a few months ago after she lost her sense of smell. Despite this scary ordeal, Haddish was able to laugh about her experience and divulge how going through it made her feel powerful.

“I think I’m superhuman, personally I think I have superpowers because I don’t even have antibodies,” Haddish said.

Sociology junior Cyana Boone-Nelson is a resident assistant in Toltec who helped promote the event. She was excited to see SDSU secure such a high-profile appearance, especially with Haddish being one of her favorite comedians.

“Tiffany is East African and so am I, so I support her in all her endeavors. Plus, she’s been through a lot in her life and I love how she keeps it real and honest always,” Boone-Nelson said.

Civil engineering junior Josiah Imperial was ecstatic Aztec Nights is still offering students the chance to watch performers together, even if it’s through a screen.

“An advantage [of online events] is that we can still interact with each other and reach out to the other participants while we are listening to a webinar,” Imperial said.

Despite this advantage, Boone-Nelson noted that although the online feature allows people to watch comfortably, it’s likely much harder for performers to feel comfortable in a virtual setting.

“It can’t be much of a true comedy show if the performer has no real crowd feedback due to the different zoom settings for big events,” Boone-Nelson said.

Following Haddish’s Q&A and a brief intermission, viewers were asked to switch over to the streaming platform Twitch to watch comedian and magician Joseph Tran’s performance. Students were offered the chance to win up to $300 in prizes, including gift cards from Amazon and Trader Joes, through an online trivia game show hosted by Tran.

The game show included a virtual scavenger hunt where viewers submitted pictures of specific items and recorded themselves doing various dances, along with Kahoot-style trivia rounds where fast and correct responses were rewarded with more points and prizes.

These game show rounds were interspersed with segments where Tran performed card tricks and illusions while cracking jokes to the audience.

At the end of his set, Tran expressed his appreciation for college students, saying that he loves their commitment towards social issues and solving the world’s biggest problems. With his final words, he left a message of encouragement for the viewers.

The next Aztec Nights event will be “Finding Your Inner Kid With Dance Marathon: A Night of Cardio Dance, Baking Contest, A Mentalist, And More!” on Saturday, Sept. 12.