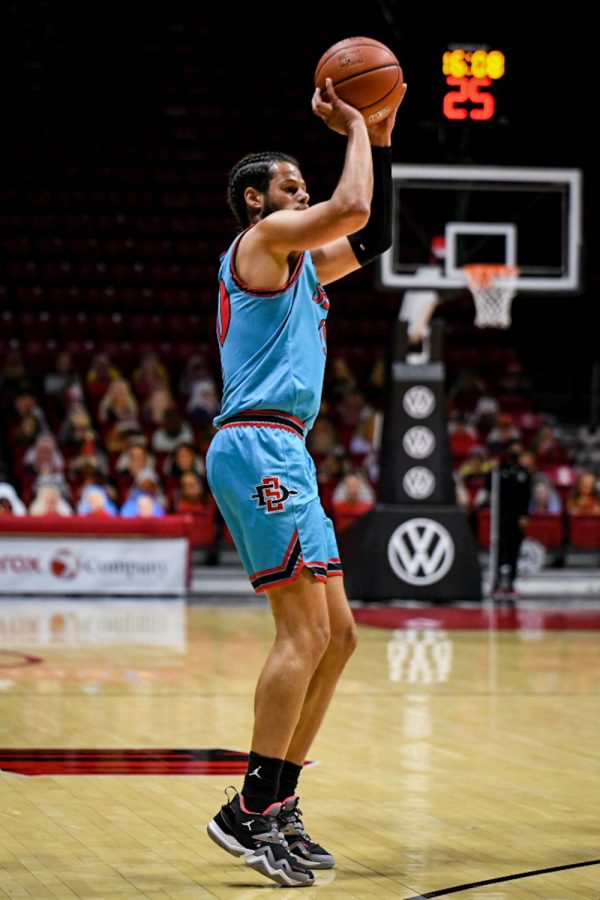 Senior guard Jordan Schakel fires a 3-point shot during the Aztecs’ 77-58 win over the Anteaters on Nov. 27 at Viejas Arena.

The Aztecs (4-0) were scoreless for the first 6:07 of the game, which ultimately resulted in a 34-20 halftime deficit. SDSU used defense to get itself back in the game, as the Waves (2-2) were outscored 45-26 in the second half.

“Until you come back, you don’t know if you can,” Dutcher said. “And so this team — like last year’s team — showed some grit and determination. It’s a new cast and they showed that they’re resilient, that they don’t panic when things aren’t going well, they stay together.”

The Scarlet and Black were off to its most lackluster start of the 2020-21 campaign, scoring just 20 points in the first half at home.

A large part of that: turnovers.

The Aztecs committed 11 turnovers in the first half. Pepperdine was able to capitalize, scoring nine points following those mistakes.

It also wasn’t a pretty day for the Aztecs from beyond the arc.

Down 16 at halftime, senior guard Jordan Schakel said he emphasized effort and persistence to his teammates at the break.

SDSU turned to the staples of its program — defense and effort — at halftime. As a result, the second half was entirely different.

The Aztecs turned the ball over only four times and clamped down to hold Pepperdine to shoot just 21.4% from the field (compared to 57.1% in the first half). The Waves also struggled offensively, as the Aztecs’ defense forced 16 total turnovers.

A large portion of SDSU’s success on offense is owed to drawing fouls that translated into points. The Aztecs made 21 shots from the charity stripe.

“I thought we ran out and attacked stronger to the basket,” Dutcher said of his team’s ability to get to the free-throw line. “Instead of settling for threes, I thought we attacked the basket and got to the foul line a lot. I think we shot 31 free throws, which is a really good number.”

With Schakel (17 points) and senior forward Matt Mitchell (13 points) being the only two starters in double-figures, SDSU needed someone on the bench to step up yet again.

Tomaić broke the Aztecs’ deadlock, scoring the team’s first points of the game after six scoreless minutes. He ended his day with 14 minutes of game action, scoring 10 points while collecting five rebounds and three steals.

The Maryland transfer was a proponent in the Aztecs winning both the rebound battle (38-27) and points in the paint (30-26).

Tomaić said he was hoping to provide a spark off the bench and his teammates were able to feed off of it.

“I will try to always bring the energy element to the court,” Tomaić said. “Energy is contagious, so once one guy has it, it’s pretty easy for the rest of the guys to catch up.”

The Aztecs take on No. 25 Arizona State on the road on Dec. 10 before facing rival Brigham Young at home on Dec. 18.