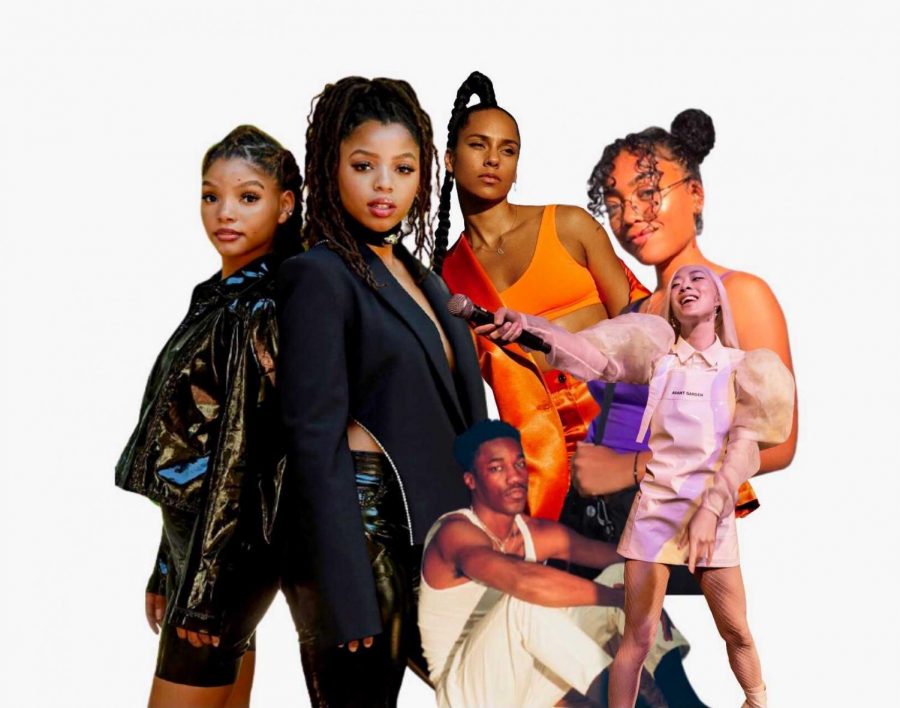 After a stressful year exacerbated by a devastating pandemic, a tense presidential election, and the increasing effects of climate change, the year 2020 is finally coming to a slow-moving conclusion.

To commemorate the abundant year of music we’ve been blessed with despite the year’s constant chaos, here are the best albums of the year, voted on by The Daily Aztec staff.
Rina Sawayama “SAWAYAMA”
On Oct. 26, 2020, versatile pop singer Rina Sawayama graced the virtual stage of The Tonight Show with Jimmy Fallon, marking her first TV show performance and a sensational primetime appearance for the artist. Though her fans had known this for a while, her live rendition of “XS” demonstrated why Sawayama is a generation-defining artist.

Nearly seven months prior, Sawayama released her debut album “SAWAYAMA,” a self-assured work of art, filled with layered tunes that paint a polished picture of her existence.

The powerhouse tracks of “SAWAYAMA” are built with extensive influence from colossal turn-of-the-century rock and metal bands to create something more innovative than what’s expected of a pop artist. Within numerous songs on the project, Sawayama seamlessly dashes from a Y2K-Esque pop tune to a riotous nu-metal guitar riff to a luscious R&B hook and back throughout.

For instance, the invigorating “Dynasty” feels like a depth-defying drop on a rollercoaster ride

and marks a bold yet graceful extension from her previous sound. It pairs nicely with the explosive “STFU!,” a song that chronicles the frustrating stereotyping and microaggressions she’s experienced and inspires victims of these racist encounters to fight back.

Other standouts include the sleek and glamorous “Tokyo Love Hotel” that underscores her expansive vocal range over dance-pop production. Also, the captivating “XS” and groovy “Comme De Garcons (Like the Boys),” both of which offer strong rejections of toxic societal norms. While “XS” attacks the excessive opulence of mass consumption, “Comme De Garcons” champions female empowerment and confidence.

However, Sawayama’s finest songwriting comes out when she reminisces. Her sorrowful and empathetic “Bad Friend” and the LBGTQ anthem “Chosen Family” emotionally portray her struggles to find a true family. These passionate records create a peaceful space for listeners yearning to be accepted and helps to find solace in the changes we don’t see coming.

Regardless of her lack of Grammy nominations, and the arduous hurdles she’s had to leap, Sawayama is the most unique artist in pop and is destined for an exceptional career. Everyone who doubted her will catch up soon enough.
Chloe x Halle “Ungodly Hour”
Chloe and Halle Bailey lead noticeably busy lives. With roles as main characters on Freeform’s “Grownish” and Halle’s impending turn as Ariel in the upcoming The Little Mermaid live-action film, their brand is ever-expanding. But not as fast as their music.

Their sophomore R&B album “Ungodly Hour” is a cultivated, romantic excursion that is long enough to tell a story but so brief it’ll leave you wanting more. It’s not a brash leap from their appealing debut “The Kids are Alright,” but a subtle evolution that now sees them as young adults navigating the dating world.

Besides writing all of their songs on the project, the duo is responsible for producing about half of the tracks (5 by Chloe, 2 as a duo).

Their superb songwriting and production skill is seen on “Tipsy,” a warning for men not to play with their hearts. Chloe’s lively instrumental provides the sisters free reign to rap and sing playfully about getting revenge on evil ex-lovers.

Throughout, there are plenty of moments when they show off their sisterly harmonic singing abilities (“Forgive Me” and “Lonely”) and Chloe further flaunts her savvy as a producer (“Overwhelmed” and “Baby Girl”).

Nevertheless, the most essential song on the project is the infectiously smooth “Do it” which simultaneously showcases the duo at their most angelic and seductive. Along with the title track, produced by English electronic duo Disclosure, the sisters confirm they’re a fantastic team but can equally shine on their own as well.

Though the first half of the album is packed with alluring music, their final songs on the project are full of remarkable breakthroughs that cement this as their coming-out party.

This includes “Don’t Make It Harder on Me” which has the elegance and bliss of a Motown classic and “Wonder What She Thinks of Me” a soothing and sophisticated perspective on love triangles. This stunning level of musical maturity makes it easy to see why Beyoncé mentored the sisters and signed them to her Parkwood Entertainment label.

With “Ungodly Hour” there seems to be nothing Chloe x Halle can’t do and the only mystery seems to be whether they’ll conquer movies, TV, or music first.

The album’s lead single, “LIKE I WANT YOU” caught the public’s attention in November 2019 before he made an appearance on Drake’s “Chicago Freestyle” earlier this year and with opening up for Snoh Aalegra, the artist gained more and well-deserved exposure.

Now, the singer/songwriter has generated a fanbase of his own through his polished eight-track and Grammy-nominated album, “TAKE TIME,” an exquisite musical representation of the complexities of being in love.

The production on the album is very simplistic, allowing basic instrumentals to deliberately present Giveon’s impactful voice and songwriting. Going along a narrative arc yet conversational route and exploring the ups and downs of a relationship, he focuses on the tender emotions a man feels throughout each conventional stage of a relationship.

The power of spoken messages is a massive influence on the album (“TAKE TIME (INTERLUDE)” and “THE BEACH”) in efforts to add an extra layer of tenderness, which is definitely not a new concept in R&B music.

Delivering heart-wrenching melodies with both old school and familiar R&B attributes, Giveon flexes his vocal ability beyond his baritone register in tracks like “THIS AIN’T LOVE, “FAVORITE MISTAKE” and “WORLD WE CREATED”.

“HEARTBREAK ANNIVERSARY” highlights Giveon’s poetic songwriting in lyrics like, “Just like the day that I met you, the day I thought forever / Said that you love me, but that’ll last for never”. The vocals on this track are poised and angelic as Giveon’s falsetto comes in and out appropriately like in the final track,  “VANISH”, capturing the aftermath of a breakup but in the most delicate of ways.

Giveon is determined to be a “pioneer” in his own interpretation of R&B and “TAKE TIME” is only the beginning.
Alicia Keys “Alicia”
Alicia Keys’ seventh studio album, “ALICIA”, doesn’t follow the same artistic path that the more exploratory, versatile side of her 2016 album “HERE” seemed to hint at. It does not hit at the anthemic R&B brand she is best known for, but it’s both timely and empowering.

With sixteen diverse tracks, “ALICIA” is praised as Keys’ most personal album and it genuinely fits that description. Compared to previous albums, Keys sounds more secure in her skin and fans may even see it as a response of growth to her previous odes to empowerment like “Superwoman,” “Brand New Me” or “Girl On Fire,” which were all emotionally raw but sometimes lack a bit in personality. “ALICIA” shows Keys in a more confident light like fans have never seen before, with plenty of personality.

Though Keys offers anthems of hope on “ALICIA”, she does it primarily to spread optimism on her own terms. When she sings “What if I wasn’t Alicia? / Would it please ya?” on the opening track, “Truth Without Love”, there’s a feeling of humbleness and full control in her tone, and that self-assurance exudes throughout the album.

Not many can deliver the lines “Me, me, me, me, me, me, me / It needs to be about me” without sounding even slightly obnoxious – yet that is exactly what Keys does on “Me x 7” with Philadelphia rapper Tierra Whack.

No stranger to the piano and being politically present, Keys captures a mother’s grief over her son being gunned down and nods to victims of police brutality in the somber ballad, “Perfect Way To Die”. However, exploring away from the piano, the guitar makes a huge and striking appearance on “ALICIA” in songs like “Gramercy Park” as well as in “Underdog”, co-written with Ed Sheeran and “Good Job”, two tracks dedicated to the frontline workers working amid the COVID-19 pandemic.

Ultimately, Keys sounds remarkably seasoned on “ALICIA.” Pronouncing the exploration of the endlessness of her voice and ingenuity extraordinarily, the spaciousness allows the singer’s nuanced and versatile voice to speak like never before.

Written by Trinity Bland, Opinion Editor
Umi “Introspection” EP
Empowerment, inner peace and growth are all words that describe the feeling that artist UMI stirred up in her EP “Introspection.”

Releasing her third EP on June 21, UMI lets listeners in as she talks about inner reflection, broken relationships and reaching peace.

Opening with the title track “Introspection,” UMI shares her inner dialogue and struggles with sorting out her emotions, “Why I’m so afraid to fight back?/ I got a lot of shit to unpack/ I never write back/I think it’s my bad/ I shouldn’t take it in/ I try to go within myself.”

She continues this inner dialogue in “Open Up” and “Bet” as she grapples with communicating her feelings in a relationship that is slowly falling apart.

In an interview with Rated R&B, UMI shares that “Open Up” is a look into her heart space and said she wrote this song “about that feeling before a breakup when you’re torn between the guilt of hurting someone else and doing what’s best for you.”

The inner journey then shifts to acceptance in the song titled “Where I Wander” as she sings the lyrics, “No need to keep fighting what you’re dealt/ You must take precaution in this hell/ You were given options where to sail so.” These words precede the chorus that seems to express a sort of release — the release of the anger and pain intertwined throughout the EP, “Open water, open water/ Where I wander/ Clear the chakras, send me higher/Feels amazing.”

This feeling of release carries over to the upbeat song “Pretty Girl hi!” as she opens the song with the lyrics, “I feel no weight resistance/Feel it in the air/ Your soul is safe, just listen close.”

The EP closes with “Broken Bottle” which explores navigating broken relationships and the journey to healing and forgiveness.

The EP felt as if the listener was reading UMI’s diary. It felt refreshing to hear about real and authentic experiences with finding oneself, love and the rawness of introspection. This project is something you can listen to day and night and be able to obsess over for years to come.