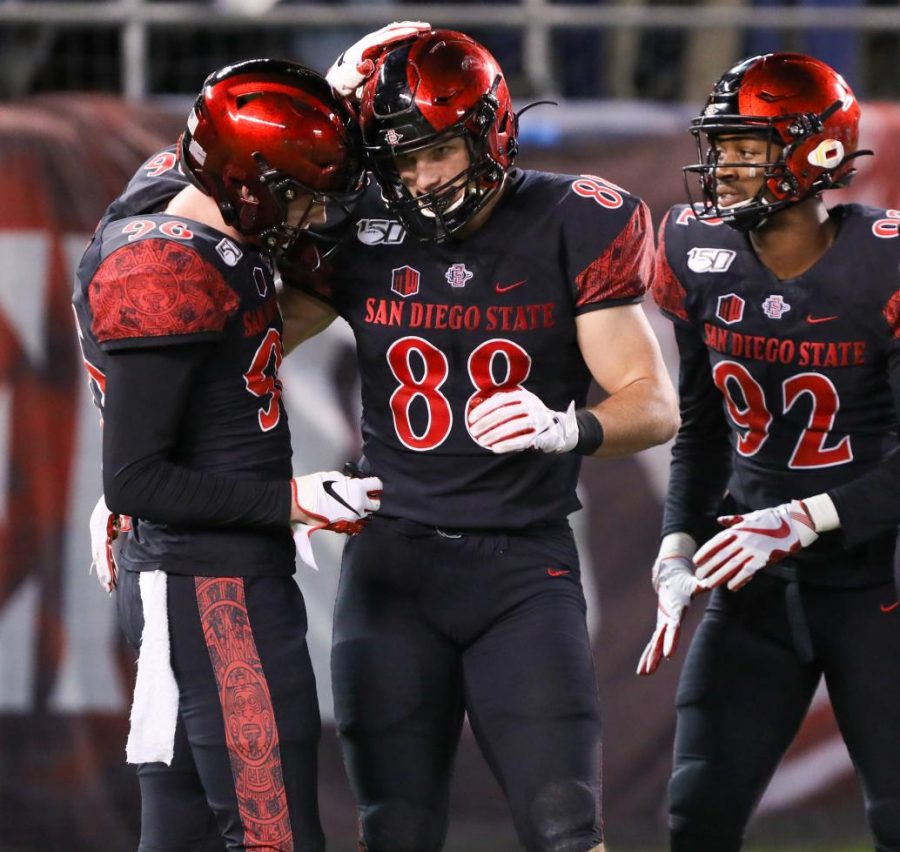 San Diego State Football closed out its regular season with a 28-14 defeat to No. 18 ranked Brigham Young University on Saturday night at LaVell Edwards Stadium.

The Aztecs stayed within striking distance for most of the first half, heading to the locker room down only 17-14.

Unfortunately for SDSU, the second half was a much different experience.

The offense got shut out in the second half and the BYU offense was able to separate themselves enough to get to 10-1 on the year.

1. Struggles on both sides of the ball

The Aztecs started the game off by surrendering a 75-yard touchdown drive to BYU junior quarterback Zach Wilson and the Cougars’ offense on their first series of the game.

SDSU then answered back with a 25-yard touchdown run from junior running back Kaegun Williams on its  their opening drive — the first time they’ve done so this season.

About three minutes later, the Aztecs took advantage of a fumble from BYU tight end Isaac Rex and capitalized on the ensuing offensive possession. Sophomore quarterback Jordon Brookshire led the Aztecs downfield and into the red zone.

Then, junior wide receiver Elijah Kothe made an impressive diving catch to put SDSU up 14-7 in the first quarter.

Unfortunately for SDSU, those would be the last points they’d score on the night, leaving the defense out to dry with just a one score lead.

Brookshire mentioned postgame just how difficult the BYU defense was on the night, mentioning how getting downfield was a challenge.

“I mean, just their coverage, they’re a great team, great defensive team,” Brookshire said. “With their coverage they easily drop underneath things so it’s hard to push the ball down the field.

If there’s one thing the Aztecs are used to, it’s their defense also being able to make it tough on opposing offenses. But facing one of the nation’s best quarterbacks in Wilson proved to be a bit much to handle.

Wilson finished the night with three touchdown passes and 310 passing yards, with the passing yards being by far the most that the SDSU defense has given up this season.

“The frustrating part is he’s gonna make some accurate throws,” said Johnson. “You look at some of his plays down the ballgame, they were all on the money, and they were timed perfectly. Right as the receiver turns his head, the ball is there.”

Usually it’s the Aztecs taking advantage of points off turnovers, but the Cougars were able to take advantage of some crushing giveaways to score points.

With about 11:00 left in the second quarter, SDSU junior quarterback Jordon Brookshire threw an interception just outside the red zone while the Aztecs were up 14-7.

BYU would take advantage, driving down the field, and eventually, Wilson found a wide open Rex to tie the game up at 14-14 in the second quarter. A field goal in the final seconds of the first half put BYU up 17-14 heading into the locker room.

To begin the second half, it looked like the Aztecs were primed to score. Following a couple of nice runs from senior running back Greg Bell, SDSU was able to set themselves up in the red zone.

But then, Williams fumbled the ball and BYU recovered. The Cougars then drove down the field but were held to just a field goal to go up 20-14.

Head coach Brady Hoke said postgame that those two turnovers were a big reason for the loss.

“I think they were huge,” Hoke said. “Anytime you have turnovers, it’s usually not good and obviously tonight, you know those two both ended up in points.”

At the start of the fourth quarter, SDSU drove the ball into BYU territory, then, faced with a fourth down, opted to go for it with two yards to go. The Aztecs tried a QB keeper play but Brookshire barely made it to the line of scrimmage, causing a turnover on downs.

The Cougars then drove down the field and capped off the drive with a touchdown pass to Rex, which they followed with a successful two-point conversion to increase their lead and make it a 28-14 ballgame.

Turnovers on downs ended up being what put the nail in the coffin for SDSU, as two consecutive failed fourth down conversions essentially sealed the game for BYU in the closing minutes.

3. The end of an unusual season

In a season where many programs were unable to complete their set schedule, SDSU closes out the year as one of the only teams to play in eight consecutive weeks.

Hoke mentioned postgame the pride he had in his program to be able to make through a season like this one.

“I’m proud of the leadership from our senior class, very proud of what they’ve been able to accomplish, the accountability they’ve had to each other,” Hoke said.

“Really, I’m proud of this group of guys. Hopefully, no other senior class or football teams have to go through the pandemic like this and I’m just real proud of how our guys represented San Diego State.”

While it likely isn’t how he pictured his senior year would go, Johnson reflected on the difficulties of being a role model for the younger players and motivating them to maintain protocol with the pandemic.

“Having to lead those guys and tell them, ‘Hey, it’s time to lock in, you can’t go home, you can’t go out, we need you to stay in your room, the only time you can leave is go to the grocery store, l just be strict on what you do and who you’re around.’ It’s hard,” Johnson Jr. said

Above all, Johnson Jr. reflected on how his team had to deal with what no other SDSU team has dealt with before.

“The legacy we leave behind on this program is (that) we stuck through the hardest time in possibly 80 years, and we made it through,” Johnson Jr. said. “If that’s not resiliency, I don’t know what it is.”