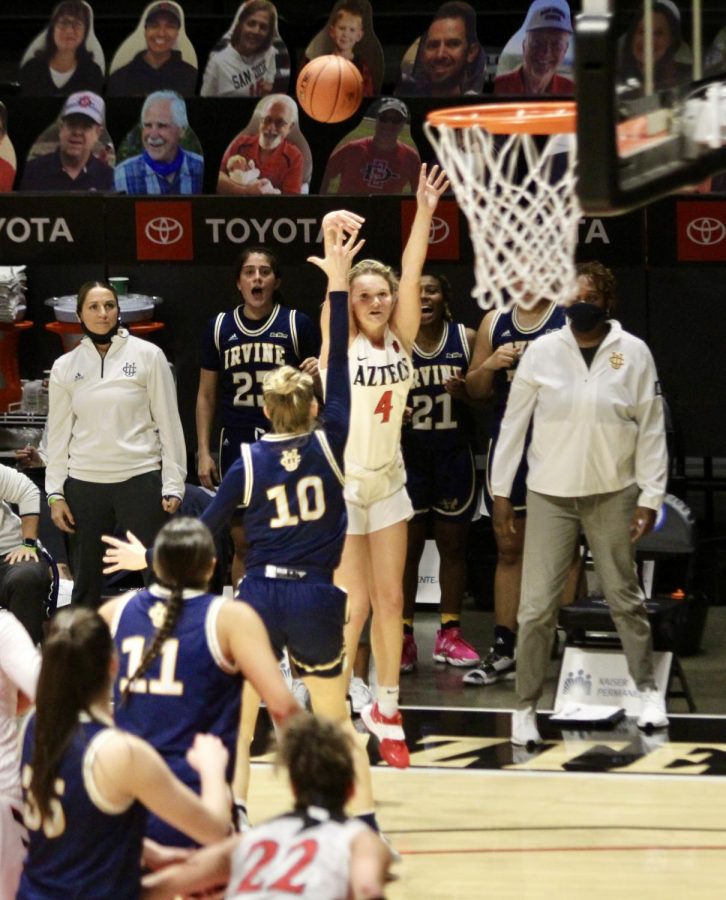 Freshman guard Bailee Chynoweth fires a 3-point shot during the Aztecs' 66-55 loss to UC Irvine on Dec. 19 at Viejas Arena.

Junior guard Mercedes Staples got the ball rolling early, sinking a leadoff 3-point shot. This proved to be the only time the Aztecs (2-5, 0-2) would take the lead, as the Anteaters (2-3)  answered back and held their advantage over the Scarlet and Black for the remainder of the contest.

SDSU was left to play catch up, and was unable to overcome the deficit.

Head coach Stacie Terry-Hutson said the pressure put up by UCI took its toll on her team, contributing to their struggle to make baskets.

“We didn’t shoot the ball well and there were too many turnovers,” she said. “Not a good recipe for a win.”

There were several key components missing from today’s team: junior guard Sophia Ramos and senior forward Kiara Edwards — both of whom are starters.

Freshman guard Bailee Chynoweth said not having Ramos and Edwards playing alongside them on the court was difficult.

“It’s tough,” said Chynoweth. “(Edwards) brings so much energy and (Ramos) is such a stabilizing component for the team. It’s hard.”

Terry-Hutson said their absence was felt, but wants to concentrate on the opportunities that this creates for some of her other athletes in terms of player development.

“It’s going to be challenging at times,” Terry-Hutson said. “What we’re focusing on is not who’s out, but who’s in, and the opportunities that they’re going to be able to get and grow from.”

This became clear on Saturday, as the Scarlet and Black showed off the younger side of their roster. With Ramos and Edwards out, freshmen Kim Villalobos and Kamaria Gipson were able to fill the gaps in the starting lineup, good for their first collegiate start.

Saturday’s matchup was somewhat of a learning opportunity for the freshmen, both of whom Terry-Hutson said she was proud of.

“I thought (Gipson) played a really good game. She did some great things offensively as far as crashing the boards, did a good job defensively,” she said. “(Villalobos) has a lot of potential. She can do a lot of things, she’s a great passer, she sees the floors well, she can defend a little bit.”

“I was pleased with their effort,” Terry-Hutson continued.

“(Gipson) does a lot for us with seeing the floor, with making decisions,” Staples said. “(Villalobos) is learning. I would definitely say this was her learning game, but I feel like she does a lot for us. She’s really good at moving the ball and knowing when to make plays.”

Villalobos and Gipson weren’t the only freshmen who made an impact on the court.

Chynoweth came into Saturday’s contest only having seen two minutes of playing time prior to being called off the bench, and proceeded to lead the team with 15 points.

All of her points came from outside the paint.

“You know, I was thinking that she made me look like a really good coach putting her in,” Terry-Hutson joked.

“She’s been ready and staying ready every day in practice. She’s so unselfish, she does everything that’s asked of her, and she’s a high IQ kid that I trust is going to get into the right spots and give me everything she’s got,” she continued. “Tonight, she was the highlight for us.”

Chynoweth said despite being nervous she was ready to perform as soon as she entered the game.

Honing in on their offense will be key for the Aztecs as they prepare for Monday’s game against the Mustangs. The Scarlet and Black shot only 31% from the field, and turned the ball over to the Anteaters 26 times.

“We’re going to go back and look, and value the ball a little more,” Terry-Hutson said. “Every possession matters. We need to do a better job of taking care of the ball and getting a quality shot every time.”

“I feel like we never give up, which is a good trait, and I think it’s going to carry into our next games,” Staples said. “Obviously our shots weren’t hitting like we wanted, so I think that our fight is going to help us move forward, and, especially when we get into conference play, to never give up.”

SDSU will finish up non-conference play against Cal Poly at home on Monday, Dec. 21 at 2 p.m.