Writer’s roundtable: Memories of the Murph 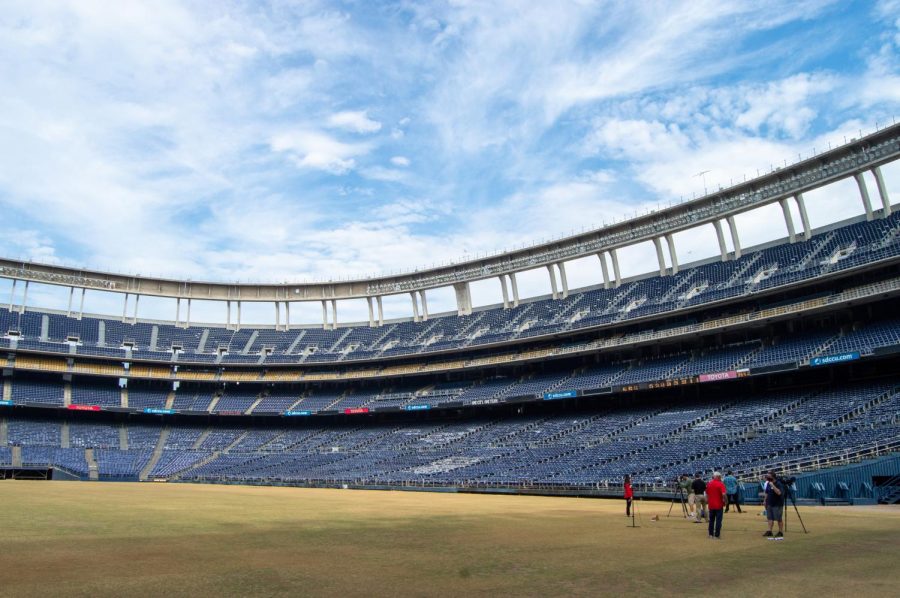 The dying, yellow grass is the most obvious sign that SDCCU Stadium's days are numbered as demolition is set to begin October 2020.

The concrete stadium in Mission Valley opened for the first time 54 years ago and was used as a multi-purpose stadium for baseball, football, soccer, motocross and Monster Jam.

Through its different names of San Diego Stadium to Jack Murphy to Qualcomm to San Diego County Credit Union (SDCCU), so many moments have come from hosting two World Series, three Super Bowls, countless college football bowl games and so many fond memories.

So many athletes have starred on the field (or the pitch) such as Tony Gwynn, Dave Winfield and Trevor Hoffman for the Padres; Don Coryell, Marshall Faulk, Donnel Pumphrey and Rashaad Penny for San Diego State; and Philip Rivers, LaDainian Tomlinson and Antonio Gates for the San Diego Chargers.

What is your favorite memory of the stadium?

Amber Salas: “There are so many good ones to just pick one. But the best memories I have, my family grew up as Chargers fans so I always remember going down on Sundays to Qualcomm Stadium. I am from San Clemente originally, but I always remember my family piling in the car and going down for games, tailgating, eating good food and all that. Those are good family memories. But, my hands down favorite memory as an Aztec was the game against Stanford our freshman year (in 2017) when the Aztecs won in a crucial play at the very end of the game. The stadium lights randomly went off and everyone used their flashlights on their phone as a little of a delay of game. Everyone yelled the ‘I believe’ chant and then we went on to win and that was the coolest experience ever.”

Devin Whatley: “I would say my favorite memory was getting to see, during my freshman year in college, when I got to see SDSU beat Arizona State when they came to play in football (in 2018). It was really fun to see because the atmosphere was so alive and it was packed. The stadium got so loud and you heard rumblings go throughout the air and it was just an exciting moment. For me, there are too many to think of, but I would say that was my favorite just considering how fun it was from the tailgate to the giveaway and the whole experience.”

Jason Freund: “My favorite moment of Qualcomm Stadium was the final Chargers game of the 2015 season. It was the season before the people of San Diego knew, or were expecting them to leave. So, my friends and I, we decided to buy and get some tickets off this one guy. It was the game against the Miami Dolphins – that’s how I remember it – but I still have the ticket with me right now. The Chargers eventually won the game and it was so emotional because you saw the Chargers decide – at the end of the game at the last series – they pulled Philip Rivers out of the game, they pulled Malcolm Floyd, they pulled out Antonio Gates as that final goodbye because everyone thought this was it. It was the final game the Chargers played in San Diego. Philip Rivers stayed after the game for hours signing autographs. He gave away his jersey, his cleats. Eric Weddle, perhaps one of the greatest safeties to ever play for the Chargers, he joined Rivers signing (autographs) for hours. He took a picture in the middle of the field and it was an emotional game and something I will never forget for my entire life.”

Andrew Finley: “My favorite memory, my dad first brought me to a Chargers game when I was 13 years old in 2011. There was a Sunday night game against the (Baltimore) Ravens and I remember going there. Part of the experience about going to a Chargers game, because I was so blessed to go to at least a dozen within that time before the Chargers went away, was tailgating beforehand in that giant parking lot. When I smell sausages, or tri-tip, or a cigar, it brings me back to being in that parking lot as a teenager getting ready to watch a football game. I remember that game and we had seats right behind the endzone and people came up to us and they were like, ‘our friends are sitting right next to you can we trade tickets, and their tickets are right on the 35-yard.’ It was on the opponent’s side, but you’re on the 35-yard line. The Chargers beat the Ravens (34-14) and I was such a big football fan at the time and had never been to a Charger game and I remember being so excited. It was a full house (for) Sunday Night Football. In general, just going to Charger games with my dad because him and I, we went to so many. Having no NFL football in San Diego, especially in that 70,000-seat stadium, there’s nothing that matches going to a football game in Qualcomm Stadium with that atmosphere. It’s just a very unique, loud atmosphere.”

Who was your favorite player to ever play in the stadium?

AS: “That’s a hard question too, because there are so many legends. As a Chargers fan, I would say Philip Rivers. He’s such a class-act guy, seeing him play in there and all the crazy things he’s done. I think it is super cool. I am also a huge Aztec football fan. You have to think of all the players that have come through our program, like Donnel Pumphrey and Rashaad Penny.”

DW: “I would say Philip Rivers. To me, he is in own field of a player. He is a different breed. I’ve never seen someone with the competitive fire and the edge he has. When you’re sitting in the stands, you can see it – he exudes it. Just seeing all the comebacks and his passion and you could really feel that connection with the crowd, so I would say Philip Rivers.”JF: “I haven’t seen a lot of Charger games. I have only been to one Charger game, the final one. I am going to say it more for Aztec football. In terms of the most exciting player I have ever seen, I am going to say Rashaad Penny because just watching Rashaad Penny run and take off on kickoffs to run it down the field was perhaps one of the best moments, best players to watch on the football field. I know there have been many players to take that field, guys like Marshall Faulk, LaDainian Tomlinson, but for me it has to be Rashaad Penny.”

AF: “I wasn’t fortunate enough to watch Tony Gwynn. Tony Gwynn is one of my icons – someone I really look up to because of what he meant to the city, meant to the Padres, being such a huge Padres fan. But, unfortunately, I didn’t get to watch him, I didn’t get to watch LT when he was here in San Diego in person. So, my favorite player to watch was Philip Rivers. Watching him go to work, he is still loyal to San Diego. He always put on a good show, too. A lot of games I went to, when the Chargers didn’t have a very good defense, he would always pull out a good 28-40-point game and it made it very entertaining to watch. I can’t really point out any specific one player besides Philip Rivers, but I remember some really great players from that group – Antonio Gates, Brandon Flowers, Eric Weddle. Philip Rivers is the one that stands out most to me.”