Softball eager to be back in action for 2021 season 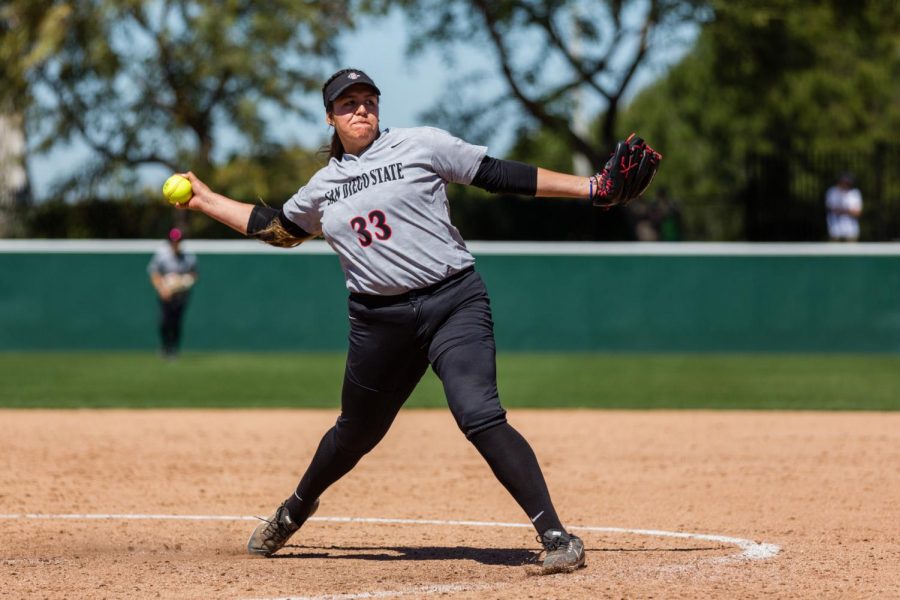 San Diego State softball is making its way back to the field for the first time in 11 months with its first home series of the season set for this weekend against UC Davis. After COVID-19 wiped out the remainder of the 2020 season, the Aztecs are eager to face opponents and carry over last year’s success.

The Aztecs started last season on Feb. 6 and were only able to make it to March 8 before the Mountain West Conference Board of Directors decided to cancel all remaining spring sports. The Aztecs were set to host the defending league champion Colorado State the weekend of March 13-15. The remainder of the season was canceled just one day before the series.

The Scarlet and Black were projected to finish second in the Mountain West preseason poll and finished the season with a 17-11 record.

This season brings new opportunities for the Aztecs with a 44-game schedule and new additions.

During the off-season, the Aztecs added four new transfers to the roster, with all four coming from Power 5 schools.

Senior outfielder Jenna Holcomb joins the Aztecs from the University of Tennessee. During her four seasons at Tennessee, Holcomb started in 163 games and played in 194 total games. Throughout her career with the Volunteers, she batted .353 (164-for-464) with 110 runs, 37 RBIs, nine doubles, five triples, 29 walks and 32 stolen bases.

Junior utility and catcher Danielle Romanello also joins the Aztecs from the SEC. Romanello spent two seasons at the University of Florida from 2018-19, where she played in 79 total games. During her two years with the Gators, Romanello batted .185 (24-for-130) hitting five home runs, 18 RBIs, 12 runs, five doubles and a triple. She owned a .354 slugging percentage and a .270 on-base mark. Romanello was also perfect in the field in 28 chances.

Nicole Siess joins the Aztecs as a sophomore utility from Mt. San Antonio College and Purdue. Siess played at Purdue for one year in 2019 where she appeared in 22 games. She batted .105 (2-for-19) with one home run, two RBIs and five runs scored. She spent last season at Mt. SAC where she finished batting .518 (29-for-56) with seven home runs, 29 RBIs, 26 runs, nine doubles, four triples and 10 stolen bases. At Mt. SAC, she recorded a .569 on-base percentage and 1.196 slugging percentage.

Alyssa Pinto is the final transfer joining the Aztecs as a redshirt freshman utility. She spent the fall of 2018 playing fall ball at the University of Oregon and the 2019 season at Ole Miss before an injury cut her season short.

In addition to the new transfers, the Aztecs also have two seniors returning for a fifth year season, after the NCAA granted an extra year of eligibility. Shortstop Shelby Thompson and pitcher Marissa Moreno are returning to the field for one more shot after their shortened season last year.

This season, SDSU softball is one of the few sports that has the opportunity to play nonconference games.

The Scarlet and Black will play just about one month of nonconference games before facing their first Mountain West opponent, the Nevada Wolf Pack, for a doubleheader on March 20.