The virtual music, art and dance festival recreated the concert atmosphere and connections with the community 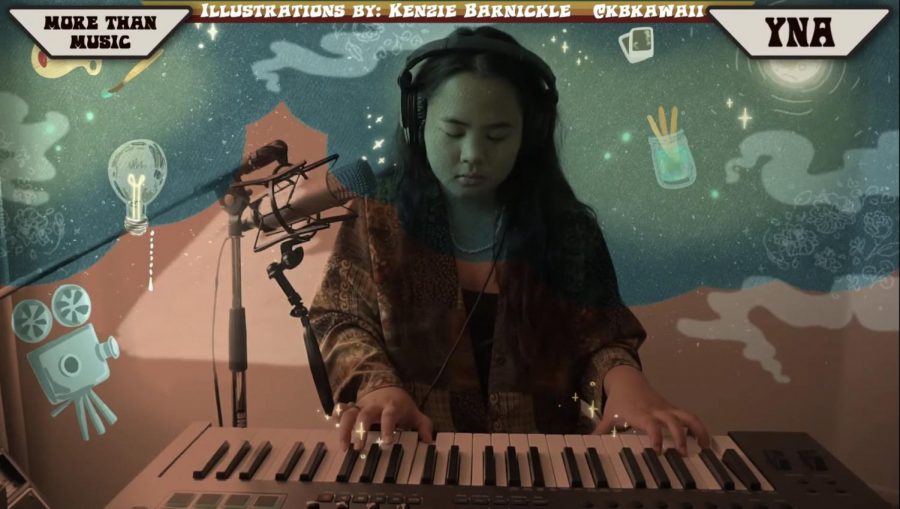 The feeling of excitement and anticipation in the air.

Being connected to your community.

These are all aspects regular concert-goers haven’t felt since the pandemic hit the world and cancelled all in-person events.

The festival was a compilation of pre-recorded musical performances, art showings, dances and more and was live streamed on YouTube for almost three hours. Performances begin at 11:00.

“It was really cool to see (how) that livestream could give me the same feeling that live events give me which was really, really crazy,” President of AMG and senior Denise Zorer said. “When we went live and I saw everyone in the chat, I felt euphoric.”

Many viewers could comment and interact within the live chat. A total of about 940 users came in and out of the livestream and the festival averaged about 120 viewers at one time.

Some of the musicians, illustrators and other viewers felt the same feeling as Zorer’s.

“The countdown especially gave me that feeling and everybody in the chat engaging with each other,” AMG Director of New Media and junior Yna Pineda said.

Kenize Barnickle, a graphic designer and dancer, agreed saying she got “butterflies” right before it started.

Another performer and senior Simran Budhwani said she loved the feeling of sharing art and being a part of such an encouraging, supportive community event.

“We can’t do this live so I’m so happy that we were able to do it,” Budhwani said. “Even through this platform, it still felt like we were at a live concert.”

She performed covers of “Titanium” by Sia, “Everything I Wanted” by Billie Eilish along with other Bollywood mashup songs.

“We chose art because we feel like art brings people together,” Rotaract Vice President. of Judicial Affairs Darren Wilson said. “Why not bring people together for a good cause you know?”

The More Than Music festival raised money for the San Diego Black LGBTQ Coalition and raised about $2,507, exceeding its goal of $2,015.

“There are many Black, trans lives that just aren’t being talked about enough,” Wilson said. “Historically, they are one of the most oppressed groups in America.”

The festival had 17 performers in total. It started off with rappers and singers accompanied by either their instruments, LED lights/staging or graphic design elements edited into their performances. Near the middle and end, dancers such as the SDSU Diamonds performed.

Pineda performed a mix of covers and original songs at this virtual festival. She sang covers of “To Be So Lonely” by Harry Styles and “Song to You” by Leon Thomas to appeal to viewers’ nostalgia surrounding popular Nickelodeon show “Victorious.”

Pineda also performed her original songs “If I was an Artist”, “Unaligned” and “Someday.” The first two original songs listed above incorporated Barnickle’s designs into the performance video.

The collaborative process incorporated searching Pinterest together and Barnickle said she also listened to Pineda’s original songs individually on repeat while reading the lyrics and just started sketching.

“Once she did the Pinterest stuff and she asked me which ones popped out to me, I feel like our minds just went together so well,” Pineda said. “For illustrations, it was like beyond what I could ever expect.”

The event also held two raffles with one prize consisting of a painting of FKA Twigs and a Michaels gift card and the other prize included a BluTooth record player, a vinyl of Tame Impala’s “The Slow Rush” and a $50 gift card to local vinyl store, Beat Box Records.

Donations for the event could be given directly on the SD Black LGBTQ Coalition’s website by any viewer and much of the money raised also came from outreach by Rotaract.

The event took about five months in the making and it feels like all the hard work paid off, according to Zorer.

“My least favorite part was not being able to be in-person, I feel like that was everybody’s least favorite part,” Budhwani said. “We weren’t able to connect and look into somebody’s eyes and see them singing the lyrics (with you) and really feeling that concert vibe, but it was as close as it could possibly get.”