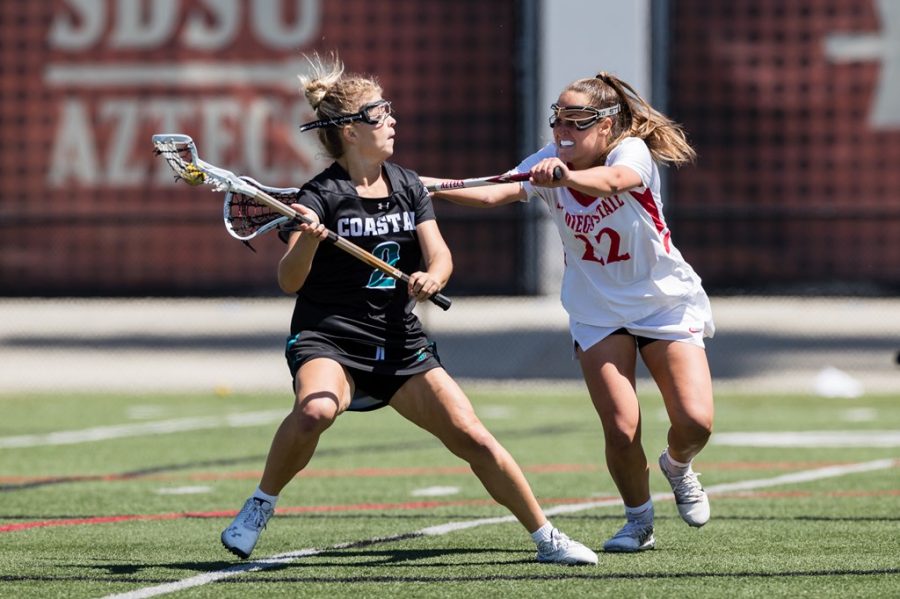 San Diego State lacrosse was able to pull out another narrow victory, 11-10, on Easter Sunday over the California Golden Bears, ending the team’s four-game losing streak.

On the offensive side, Jones scored four goals out of seven shots and a turnover. Resnick also tacked on two more goals and three assists.

The Aztecs’ defense was highlighted by Sharretts’ performance. Her career saves total now sits at 505, making her just the seventh goalkeeper in Mountain Pacific Sports Federation history to reach 500 or more saves.

The Scarlet and Black came out strong within the first 10 minutes of the game with a commanding 5-1 lead. They would continue their momentum through the rest of the first half with three more goals, leading 8-5 going into intermission.

To kick off the second half, Resnick struck quickly with her second goal of the game to put the score at 9-5. However, Cal adjusted on both sides of the ball with four unanswered goals, tying the game at nine with just under 14 minutes left of play.

The remainder of the game became a defensive battle but the final two goals by freshman midfielder Avonna Usher and sophomore attacker Camden O’Donnell would edge out the Golden Bears in the end.

The Aztecs will be on the road seeking to avenge their losses to the Southern California Trojans and UC Davis Aggies. Earlier this season they fell to USC, 20-6, and UC Davis, 18-7, both at home.

On Friday, the Aztecs will drive up to Los Angeles to meet the Trojans. The opening draw for April 9 is set for 12 p.m.

Two days later, the Aztecs will travel to northern California to play the Aggies, where the opening draw is also set for 12 p.m.