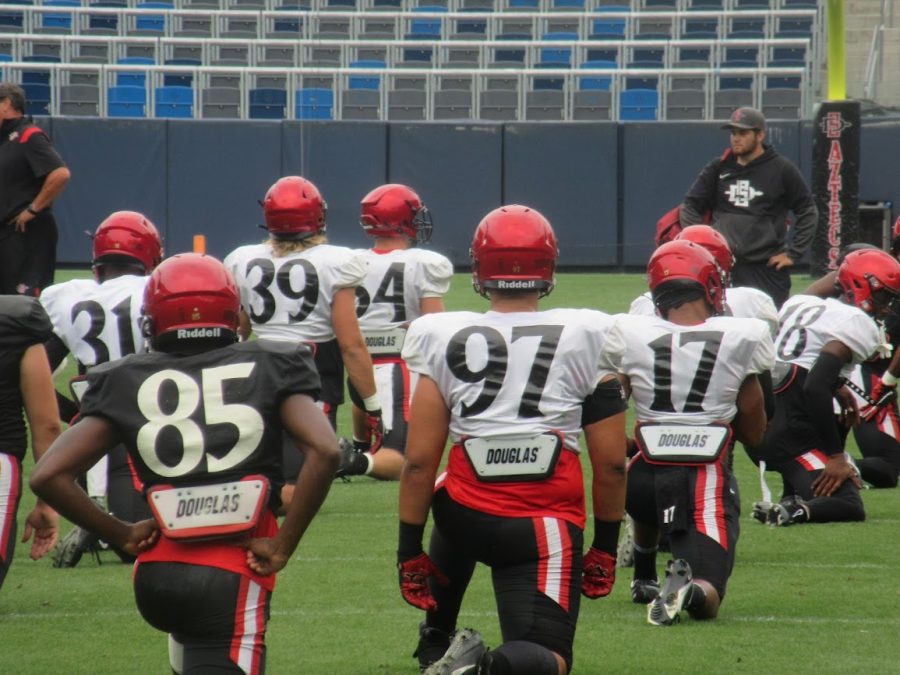 For the first time in eight months, San Diego State football played at the Dignity Health Sports Park in Carson.

The Aztecs ran a total of 75 plays during the 87-minute closed inter-squad scrimmage as they made some final adjustments before the season opener against New Mexico State.

Senior linebacker Caden McDonald saw the value of getting out the nerves of playing in Carson before the beginning of the season.

“It’s good to go through the routine of pregame stuff and being in the atmosphere of the stadium… getting those jitters out to get comfortable to the stadium and get used to traveling up here,” McDonald said. “I think it’s really important that we get to do that and get that under our belt before we get underway with the season.”

Here are three takeaways from the scrimmage.

Seniors Jordon Brookshire and Lucas Johnson, along with sophomore Jalen Mayden, continued to make their case for who out of the three should be the Aztecs starting quarterback.

In regards to his quarterbacks, Hoke saw positives and negatives but overall felt Brookshire had the better day.

“I felt Brookshire a little bit. I felt like there was some things that he did very well,” Hoke said. “They all competed, but I think Brookshire may have played better than the rest of them.”

Brookshire played 22 snaps over three series and went 7-12 with 109 yards passing. He began his tryout well, completing the first five passes he threw while showcasing his mobility by scrambling out of the pocket and connecting with senior BJ Busbee for a 45-yard completion.

Johnson and Mayden took part in 14 and 17 snaps, respectively, and both completed limited passes while Mayden had a five-yard scramble for a first down.

The Scarlet and Black have always been feared for their aggressive running. Names like Rashaad Penny and Donnel Pumphrey are just two running backs to have dominated the rushing game during their time on the Mesa.

While SDSU may not have a quality back like Pumphrey or Penny, they make up for it in quantity.

“I think (offensive coordinator) Jeff Horton is stealing,” Hoke said. “He’s got so many good backs in that room… just the way some of those guys get out there and play.”

Hoke was quick to mention the older running backs serving as mentors to the younger players such as freshman Jaylon Armstead and Cam Davis.

It was the freshmen who stole the show during the scrimmage. Armstead finished with six carries for 78 yards and a touchdown while Davis had a similar number of carries for 39 yards.

That doesn’t mean the upperclassmen stayed on the sidelines. Senior Greg Bell, the presumed starter, carried the ball four times while grabbing a screen pass before being pulled to avoid injury risk.

After facing them throughout the scrimmage, McDonald admitted that the SDSU running backs had starting potential.

“We got a whole stable of running backs,” McDonald said. “Every one of them can be a starter. They are all legit dudes. It’s good to have them on our team.”

Of course, to be a successful football program, one needs to have a balance of offense and defense.

For SDSU, their defense is still one of the best in the Mountain West.

Last season, the Scarlet and Black allowed a total of 142 points and averaged 17.8 per game.

Expect those numbers to stay relatively the same as SDSU is returning a number of key starters to their defensive front.

When asked who, in particular, stood out to him, Hoke singled out the performance of his defensive lineman, but also noted the battles occurring at the corner position.

Senior linemen Keyshawn Banks and Jonah Tavai, along with junior Cameron Thomas, were players who stood out in Hoke’s eyes while sophomore Noah Tumblin and freshman Noah Avinger were two defensive backs who were mentioned as potential starters.

As a unit, the defense totaled nine tackles for loss, including three sacks, with four pass breakups.

To McDonald, the starting defense was in sync and the live scrimmage was as close as they could to playing a real game.

The senior linebacker did acknowledge the main point the Aztecs wanted to continue to improve on throughout the season.

“Just fly around to the ball more,” McDonald said. “And play Aztec defense.”