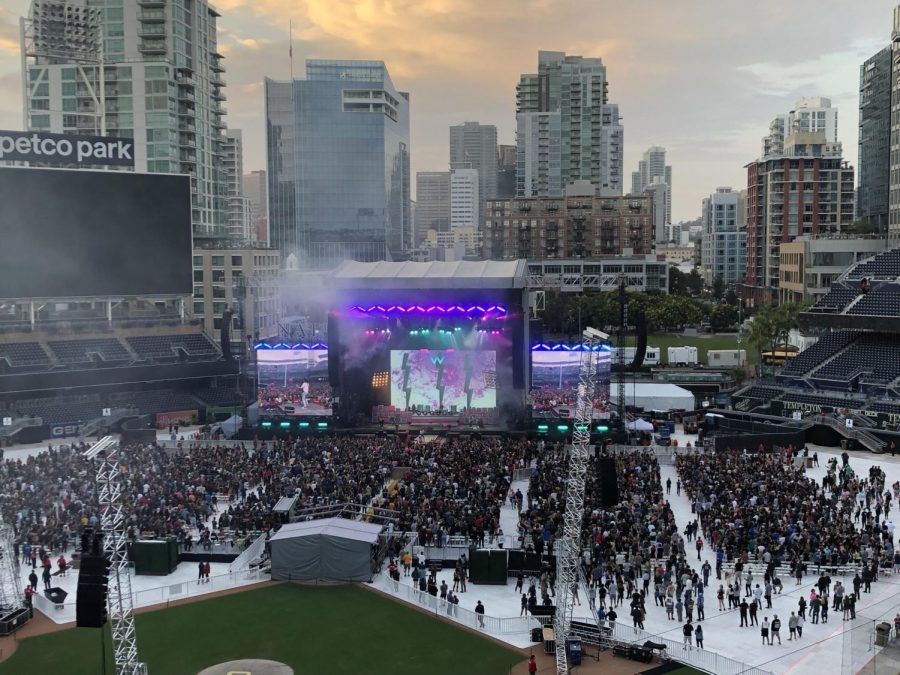 Weezer, Fall Out Boy and Green Day turned Petco Park upside down on Aug. 29 with a truly mega concert that shook the East Village after a year and a half without live music events. An audience ranging in age showed up to support their favorite bands.  This concert was a music-filled night, made for people who wanted to let loose of everything holding them down. Weezer was the first of the headline performances, with the stage decorated to match the theme of their latest album, “Van Weezer.” Three turquoise lightning bolts struck the stage of pink and purple boxes, giving off the retro ‘80s electro pop rock vibe that their new album’s sound promotes. The band walked out to Van Halen’s “Jump” starting their slot with one of their new songs called “Hero.”  Lead vocalist, Rivers Cuomo, came out swinging his guitar and rocked a mullet, a studded leather jacket and blue jeans. There was no doubt that even the younger audience goers could feel the ‘80s nostalgia.

The starting slot was the hardest of the three to take on for the bands. In addition to the early time, the sun was still shining, but Weezer prevailed by hyping the crowd up to guitar riffs with an energy that provoked a hypnotic head bobbing from everyone. There is nothing like hearing “Feels like Summer” live while basking in the glow of the San Diego sunset off East Village skyscrapers. However, some unfortunate fans on the right wing of the stadium were blinded for much of their performance (maybe feeling summer a little too much). Many fans of Weezer displayed the winged “W” call-sign with their hands and got featured on the jumbotron, along with people dancing and passing beach balls at the floor seats. Cheers mostly came for their most popular songs like “Island in the Sun” or “Beverly Hills,” but the loudest was for their cover of “Africa” by TOTO; it may have hurt the band’s egos a little, but they did not let it show as they continued to rock on. They then made a joke as they transitioned to the intermission with their song “El Scorcho” by zooming in on a Green Day fan’s t-shirt to the lyrics, “I asked you to go to the Green Day concert.”

Next up was Fall Out Boy who were introduced by a Twilight Zone-esc Rod Livingston mimicking the classic host Rod Serling’s delivery of the late ‘50s and early ‘60s show. The band came out in mostly casual attire with T-shirts and jeans except for the drummer, Andy Hurley, who went shirtless showing off his tattoo-covered torso. The “Believers Never Die” album cover inspired a set design of cobwebs and bones paired with epic pyrotechnics blasting to the songs’ suggestions like in “My Songs Know What You Did in the Dark.” The band made a successfully entertaining transition from Weezer’s theme of the past icons to the eerie chaos that goes so well with Fall Out Boy’s music. Straight from the beginning of their set with “The Phoenix” to even the lesser known newer titles like “Bob Dylan,” the band never ceased to impress with their abilities to entertain the crowd.

In the middle of Fall Out Boy’s set, bassist Pete Wentz admitted to the crowd of adoring fans that before the tour was set in motion, they were asked if people even like rock anymore to put on a show of this magnitude. Wentz got his answer from a packed stadium of all generations screaming to defend their beloved genre. As entertaining the rest of their set was, professing their love for the genre was some of the band’s only audience interaction.

As a pink bunny mascot in Billie Joe Armstrong’s iconic black dress shirt and red tie prepared the then-filled stadium (ending up “arrested” and escorted off the stage), the definitive headline act, Green Day, was ready to take the stage. The band did not need much decoration on the stage, but the diagonally hanging stage lights foreshadowed their performance… blowing the roof off the place. Beginning with the fast-paced hit “American Idiot,” the band let loose and only slowed

down to let the audience catch up. Armstrong warmed the crowd’s voices by playing imitation games and long winded “Ay-Oh’s.” He also understood the nature of his songs by telling them to shine their lights for “Boulevard of Broken Dreams.” There was an additional nudge to San Diego being an inspiration to the band when he said the song “She” was about a girl he (Armstrong) dated from here. The band interacted with the audience the most out of the three headline acts, but to top it off, they brought a fan on stage to play a guitar solo with him to “Knowledge” by Operation Ivy and gave him the guitar afterwards. With excellent timing, Armstrong knew how to direct the masses to leave the stadium smiling.

The theme of the night peaked when Green Day shared a common sentiment that everyone in the country could relate to: being trapped inside and socially distanced for a year and a half. To that point, he assured the audience this was their time to “go crazy” and proceeded with the song “Still Breathing” to transition to the back half of their performance. As the last send off was set in motion, Armstrong was left on the stage alone with an acoustic guitar and sang “Good Riddance,” reiterating his goal to give the audience the time of their lives in an era of unpredictability.