Light and airy empanadas might be closer than you think 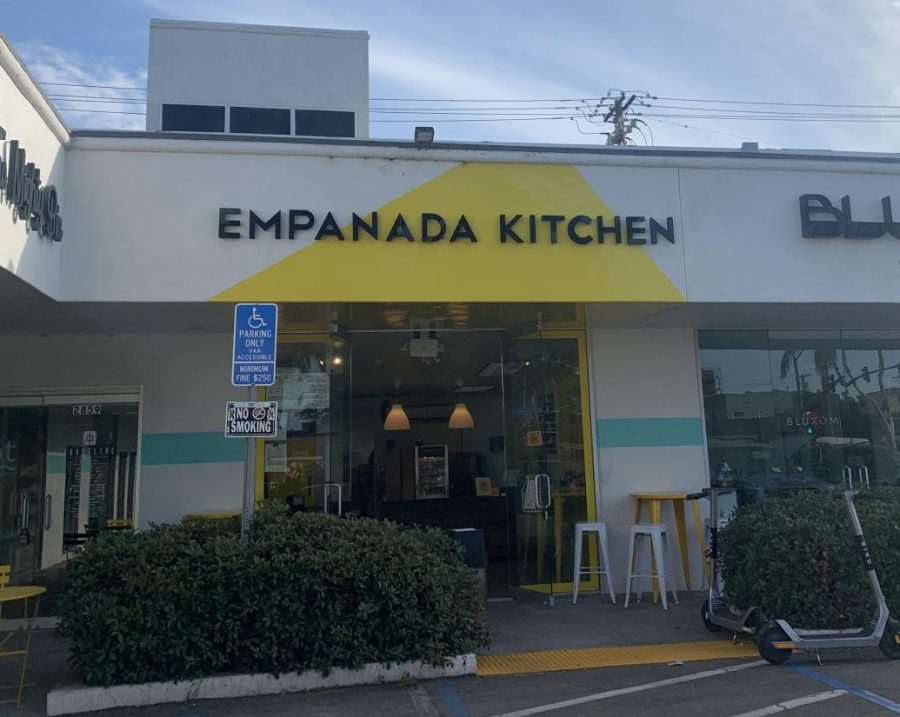 The view of the front entrance of Empanada Kitchen before one enters the modern, yet tiny store.

Empanada Kitchen is a small, dainty place smacked in between University Heights and North Park.

When people think of empanadas, what do they think of? Pastries with some type of meat in them, right? Do people actually know what an empanada is?

According to Empanada Guy, an empanada is a fried or baked turnover in the shape of a half-moon either made with flour or corn dough that can be stuffed with a lot of different items.

Want a ham and cheese empanada, by any chance, or how about a chicken empanada, possibly one with beef inside? Well, Empanada Kitchen has got you covered.

When you walk into Empanada Kitchen and approach the cashier, there’s a menu on the counter with all of the different types of empanadas they have to offer. The menu includes over nine different kinds of empanadas with affordable pricing.

For one empanada, it’s $3.95 (not including taxes), a steal considering it’s freshly baked. If you want more, there’s always an option to get an office/party pack that consists of 24 empanadas for a nice price of $84 before taxes.

Since the empanadas at Empanada Kitchen are baked, it has a different consistency than fried empanadas. Customers can tell it was baked since most of the empanadas had a nice glossy, brown sear. One can even say that baked empanadas are probably much healthier.

With baked empanadas, there is a lot less grease. This means you can have an easier time eating it since all the filling inside won’t be falling out every two minutes. That’s of course if you’re eating from side to side, rather than from the middle.

These empanadas have a buttery dough, so when you bite into it along with the filling there’s still enough presence of the butter which also gives it an airy feeling.

The chicken empanada had a nice flavor profile of chicken and a sofrito that’s sautéed together. A sofrito is a Caribbean and Latin mix of onions, peppers, garlic and herbs. The flavor of the chicken with the sofrito is a good mixture for a nice, juicy presence.

The beef empanada was surprisingly not as heavy as one may have thought. Their empanadas are consistently light and airy. This specific empanada had a dull flavor and lacked seasonings but was still delicious.

Surprisingly, the chimichurri was the item that stole the show for me. Chimichurri is a sauce made from chopped parsley, oregano, garlic, chili flakes, in a base of red wine vinegar and olive oil. Empanada Kitchen’s chimichurri has a sweet yet tangy flavor, with a little spice that is even bearable for those with a small spice tolerance. If you want a good empanada in San Diego, perhaps Empanada Kitchen is the option for you. Find more information about them on their Instagram @empanadakitchensd and DON’T forget the chimichurri.