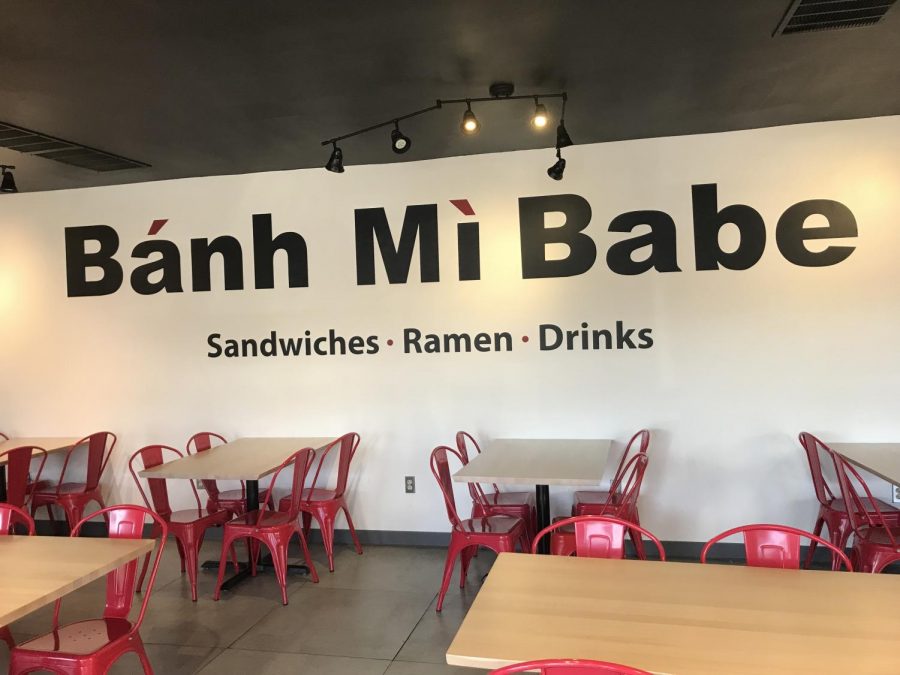 Bánh Mì Babe opened their doors during the COVID-19 pandemic in 2020.

Bánh Mì Babe is a local Vietnamese restaurant, near San Diego State University that opened in 2020 during the pandemic.

Inside the restaurant, sits a white Vespa in front of the restaurant’s official logo. Customers come in and out of the plaza dwelling establishment with foldable cardboard boxes full of food.

According to the restaurant’s website, the owners recount how when they were little girls who emigrated from Vietnam as refugees to America, they held the dream of serving up bánh mìs (Vietnamese sandwiches) at a modern restaurant.

According to an article published by theculturetrip.com, bánh mí’s were created in Saigon in the late 1950s, from the hands of a married couple known as Mr. and Mrs. Le.

“They were the first people to put the ingredients inside the bread so customers could take it with them,” the article says, “This was long before plastic and styrofoam made everything portable.”

The article also mentions that the Bánh Mì came to San Diego in 1975, to already established Vietnamese communities.

According to Ken Barber,an SDSU sophomore studying civil engineering and an employee at Bánh Mì Babe, the restaurant came to the SDSU community fairly recently, as did Bánh Mì Babe’s sister restaurant, Boba Babe. Barber claims that the sandwich is a fusion between Vietnamese and French cuisine and that it is a healthy alternative to a lot of the food on campus.

The first post was put up in February 2020 and says “Coming soon to your SDSU neighborhood.”

The next post, put up in May of 2020 (in the midst of the COVID-19 pandemic), shares the fact the restaurant had been opened for takeout orders.

As of now, the restaurant is also open for inside dining, although the sandwiches themselves are packaged to be able to be taken out of the restaurant, true to the original bánh mì’s purpose.

From the appetizers section, one can expect items such as: Vietnamese egg rolls, pork and shrimp spring rolls, rocket shrimp roll and more. Each appetizer ranges from the price of around six to eight dollars.

There are seven bánh mì’s to choose from. The best seller is the Bánh Mì Babe which is filled with “pork belly, chicken, Vietnamese ham, topped with lettuce, jalapeño, cilantro, cucumber, pickled carrot, daikon, butter garlic spread and pate,” according to the menu. It can be purchased for around $10.

Luis Leos is a San Diego local who came across the restaurant with his mom in July.

“I had the filet mignon sandwich and it was pretty good,” Leos said, “It had a sweet after taste and cucumber which was pretty crunchy.”

Barber said the shop offers something unique to SDSU.

“Not to hate on other businesses but I feel like there’s a lot more fast food business model where it’s just kind of frozen foods and get them out the door,” Barber said.

He said the food at Bánh Mì Babe is made per order.

A look at the restaurant’s Yelp shows a trend of people pointing out the prices on the menu and leaving overwhelmingly positive feedback. Back in 2020, a Yelper named Emmett T. pointed out that, “The Vietnamese sandwich shop had earned a five-star average rating from over 150+ reviews.”