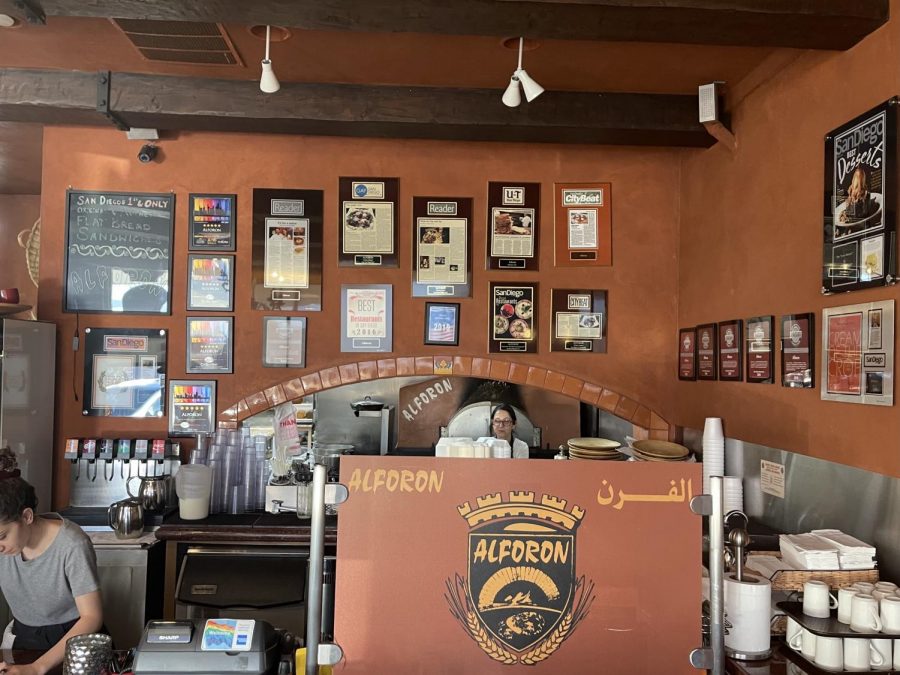 The interior of Alforon showcases their successes in magazines and in the media.

Located at 5965 El Cajon Blvd, this restaurant is a short six-minute drive from campus. They are open Wednesday through Sunday from 12 p.m. to 8 p.m.

Alforon Mediterranean is a family-run business led by George Salameh. Opened in 2009, the restaurant was Salameh’s third try at professional work after his previous jobs as an airline pilot and in the auto industry.

Following in his father’s footsteps, who is a chef in Salameh’s born country of Lebanon, he opened a restaurant that serves traditional Lebanese comfort food.

The restaurant was designed and curated by Salameh. Upon entering the place, you feel like you are transported to the middle east.

“We are your local award-winning Mediterranean restaurant,” Salameh said. “If you want an experience, come to give us a try.”

This experience is what makes the restaurant unique as customers dine in a setting similar to that of an Arab palace; Arabic music plays in the background as the aromas of spices overwhelm your senses.

At some point during your visit, Salameh and his wife will leave their post in the kitchen to personally greet you and welcome you to their restaurant, an act that customers say makes them feel right at home.

Their menu consists of traditional Lebanese comfort food such as Kibbie, Kafta and a variety of delicious flatbreads Salameh specializes in. His flatbreads come in over 30 different styles and contain ingredients Salameh sources from all over the world like soujouk, a type of spiced meat used on flatbreads and other dishes, and za’atar, an earthy, black spice mix that tastes delicious on a flatbread.

The restaurant has been awarded numerous accolades since it’s been open. In 2014, it was named the 25th restaurant in Yelp.com’s Top 100 Places to Eat in the US list .

It also served as host to Food Network’s show Diners, Drive-ins and Dives, hosted by internet legend Guy Fieri, for an episode that highlighted their Ozouk lamb dish and their soujouk flatbreads.

Salameh’s own twist on traditional Lebanese dessert Aaysh Essaraya was featured in San Diego Magazine as the restaurant was awarded two critics’ choice awards from the magazine.

The dessert is pistachio topped, cloud-like syrupy cake which tastes like something out of some Greek fantasy. The syrup has a sweet taste of lavender and rose water that infuses deeply with the fluffy yet crunchy cake that will leave you asking for seconds.

Some of the must-have dishes at Alforon are their two chef specials, the Ouzi Lamb and Fisherman’s rice dishes, as well as their freshly made-to-order flatbreads.

Depending on what you order, expect to spend from $10 to $25 on their dishes but, as Salameh said, “these aren’t dishes that take 15 to 20 minutes to make.” The food served at Alforon will be hearty, delicious and contain the special ingredient of love for every visit. Learn more about Alforon at their website www.alforon.com and follow them on Instagram @alfaron_sd.