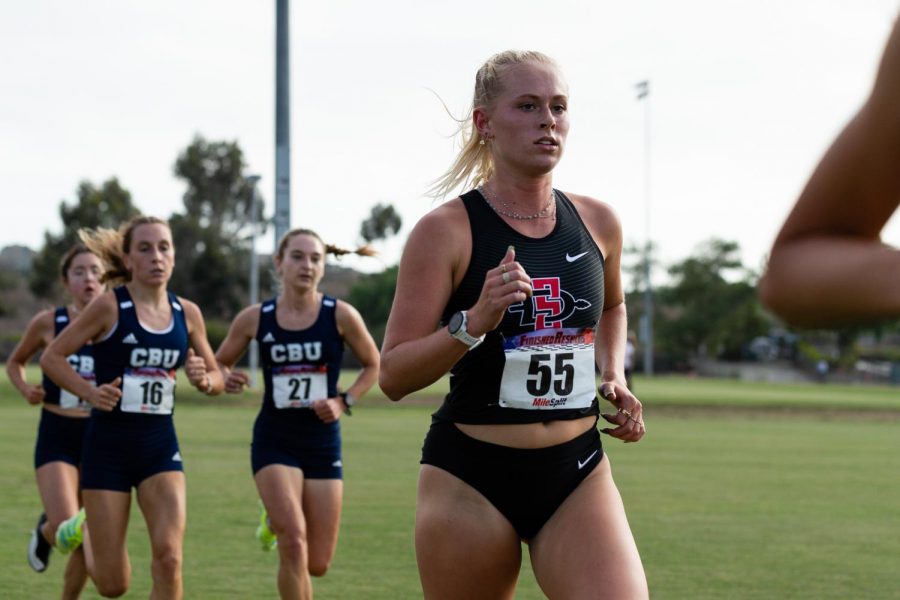 SDSU continues to own the Pac-12 this season as SDSU football crushed Arizona on Sep 11 with a final score 38-14.

The following week, Aztec football competed against Utah, ranked 22nd on the Associated Press Top 25 on Sep. 18, and gained a close victory, with a final score 33-31.

Football is not the only team dominating Pac-12 teams. Men’s soccer won against two Pac 12 teams, Stanford and University of California, Berkeley in September.

The Aztecs were only six points away from the winning team as the University of Arizona, the host of the meet, won with 45 points while SDSU went home with 51 points.

“They did a great job as a team,” Lusitina said. “Each (athlete) had a big impact”.

Arizona being one of the top teams in cross country meaning the runners had to step up, so the team did just that. Freshman Nicole Meyer placed 13th overall while her teammate senior Jessica Kain finished 17th.

A newcomer to the travel team, Lomeli helped her team place overall with a time of 21:59, getting her the spot 10th overall.

The Dave Murray Invite was filled with strong competition. Arizona’s top runner, sophomore Grace Driskill, a sophomore, led the race with a time of 21:01.

Masar, finishing in fourth place, had a time of 21:29, only eight seconds from the first place spot.

The team always sets goals for each meet. “Our goal was to win the meet,” Lusitina said. The team came very close to that goal which is a win in itself since the competition was fierce.

The runners did not crack under pressure. Competing against the best is exactly what the Aztecs desire.

“They (SDSU runners) were really energized this time around,” Lusitina said.

The Scarlet and Black plan to keep working together and have been stepping up to the line in support to push each other to the end.

SDSU’s next race will be held at the University of Riverside for the Highlander Invitational on Oct. 16, where the Aztecs will get a second chance to beat Arizona.