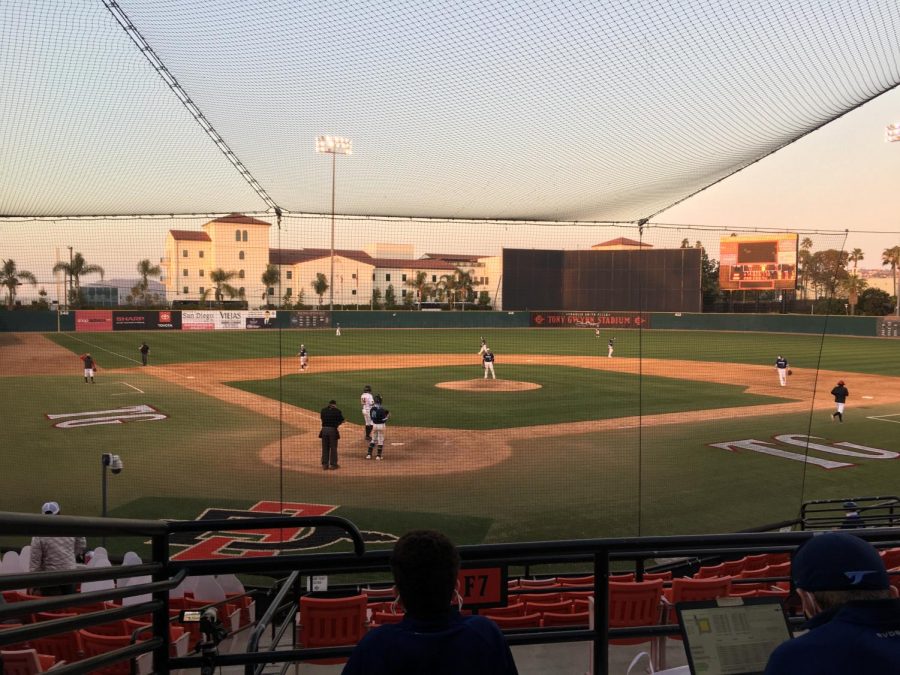 Tony Gwynn Stadium is the home of San Diego State baseball and will host the Mountain West Conference tournament for the 2022 season.

The MLB4 tournament hosts top-tier baseball programs and will provide exposure to a younger Aztec team that lost seven players to the MLB draft and free agency. The tournament will provide this year’s roster with the opportunity to go up against strong contenders from the Pac-12, AAC, and Big-12 conferences early in the season.

The Aztecs have had previous success in preseason tournaments, going 2-1 in 2020’s preseason showcase, defeating Virginia Tech and Coastal Carolina, while their lone loss came against UNC Greensboro.

The team will then travel to UC Irvine for the first of a non-conference home-and-home series on Feb. 22 and March 1 before returning home to host the Tony Gwynn Legacy tournament against three teams that have yet to be announced. This will be held at Tony Gwynn Stadium from Feb. 25 to Feb. 27.

Unlike last year’s shortened season due to COVID-19 protocols, the Scarlet and Black will have plenty of opportunities to face non-conference opponents and see new competition.

The Aztecs’ non-conference opponents fill in many single weekday competitions occurring on Monday and Tuesday evenings. The one exception being two weekend series and two home-and-home series throughout the season.

At the close of the 2021 season, the Aztecs finished second behind Nevada— just missing a bid to the playoffs. Nevada took home the Mountain West Conference Championship in 2021 and will have a similar roster makeup to last season. The Scarlet and Black will have a chance at redemption against the Wolf Pack in Reno from April 1 to April 3, and at home from May 13 to May 15.

Similar to Nevada, the Scarlet and Black took the series against UNLV at home but faced trouble with UNLV after being swept in the Aztecs’ last series of 2021. They will have the opportunity to try again at home from March 11 to March 13 and to cap off the 2022 season against the Rebels in Las Vegas on May 20 to May 22.

San Jose State sat at the bottom of the conference last year, and the Aztecs often found success against them, going 5-1 against them in 2021. They will see the Spartans again in San Jose on March 18 to March 20 and then host them at home the weekend of April 8 to April 10.

Fresno State provided similar competition to SJSU with the Aztecs going 4-2 against them in 2021. The team will host the Bulldogs at home from March 25 to March 27 and be at Fresno State in an away series from April 29 to May 1.

The Aztecs also have two series against conference opponents that they will only see once, including a trip to New Mexico on April 14 to April 16 to take on the Lobos and then later returning home to take on Air Force from May 6 to May 8.

After the cancelation of both the 2020 and 2021 Mountain West tournament that was to be hosted by the most recent champions (SDSU) due to COVID-19, the site of the tournament has been announced to be held at Tony Gwynn Stadium from May 26 to May 29.

The tournament hosts six teams in a double-elimination style tournament with the winner receiving the conference title as well as an automatic bid to the NCAA Division I Baseball Tournament.

To stay updated throughout San Diego State’s Baseball season and journey to the Mountain West conference tournament, make sure you are following @AztecsGotGame and host @jennaameyer on Twitter.