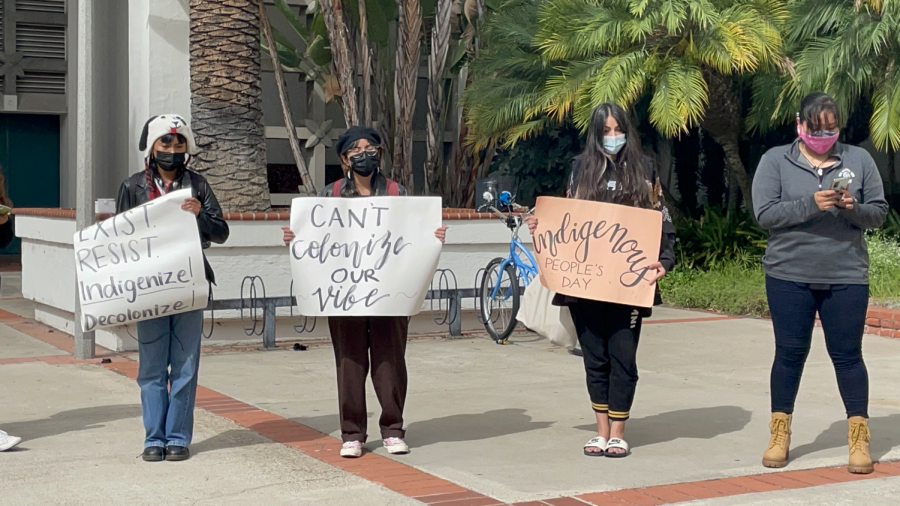 On Oct. 11, San Diego State students, faculty and staff gathered in front of Hepner Hall to rally for Indigenous People’s Day.
Tribal Liaison Jacob Alvarado Waipuk welcomed the crowd, speaking personally about protesting against the day dedicated to Christopher Columbus.
“For too long, native people, we’ve known how to be an American, but a lot of people don’t know how to be American Indians and learn our culture and who we are,” Waipuk said.

He encourages learning the history, culture and foundation of the Native Americans and to be proud to learn on Kumeyaay land.

Waipuk led the crowd in a prayer, reminding everyone to honor their ancestors and listen to stories to pass on to the next generation. A moment of silence followed as Waipuk recited the prayer in Kumeyaay language.

Waipuk then proceeded to smudge the crowd, a ceremony practiced by some Indigenous peoples, involving the burning of sacred herbs.

Fifth year interdisciplinary studies major Joy Becenti was the master of ceremonies, inviting individuals to come up and speak on behalf of Indigenous people and share experiences, stories and lessons.

One being Dr. Gabriela Kováts Sánchez, Faculty Scholar for the Native Resource Center, lecturer and academic advisor for the department of American Indian Studies.
“I’m really grateful for all of us to be here today because despite the efforts of colonization to erase, assimilate and de-indianize us, Indigenous people are still here and still resisting,” Sánchez said.

Reminding everyone it’s an ongoing conversation involving unlearning and relearning how we show up for Indigenous people.

Many students, faculty and staff stood up in front of everyone to share personal experiences of honoring the Indigenous people before them and to ask the same for all in attendance.

Tamara Strohauer, social work professor and advisor of Indigenous Social Work Alliance (ISWA) spoke about what SDSU has done in the past and what was created.

“In 2019 we held the ​​Native Truth and Healing conference here on this campus and a fire was lit,” Strohauer said. “We cooked for the elders to ask their permission to have such a conference and talk about this building here,” she said, referring to Hepner Hall.”

Strohauer spoke about honoring their people and how Waipuk put a resolution through to permanently raise the Kumeyaay flag.

This was before the world shut down and the pandemic arised, unlike most of the world, Strohauer sees the COVID-19 lockdown as a blessing.

“When that first began it honestly felt very sacred to me,” she said. “It felt like mother earth had put the human race on time out and everyone had a collective experience across this earth.”

Strohauer can still feel the power that was created at SDSU and the people they honored along with it.

“I really like seeing all these new faces here to celebrate Indigenous People’s day not Columbus Day,” second year Derrik Herrera, poly sci and American Indian Studies major said. “For this land is the land of my people as well as so many prior to San Diego, America and California existing.”

People clapped at the end of the rally, standing for the Indigenous community and supporting them. Encouraging students to use their voices to speak up in classrooms and bring up topics like colonization, fighting to become better.