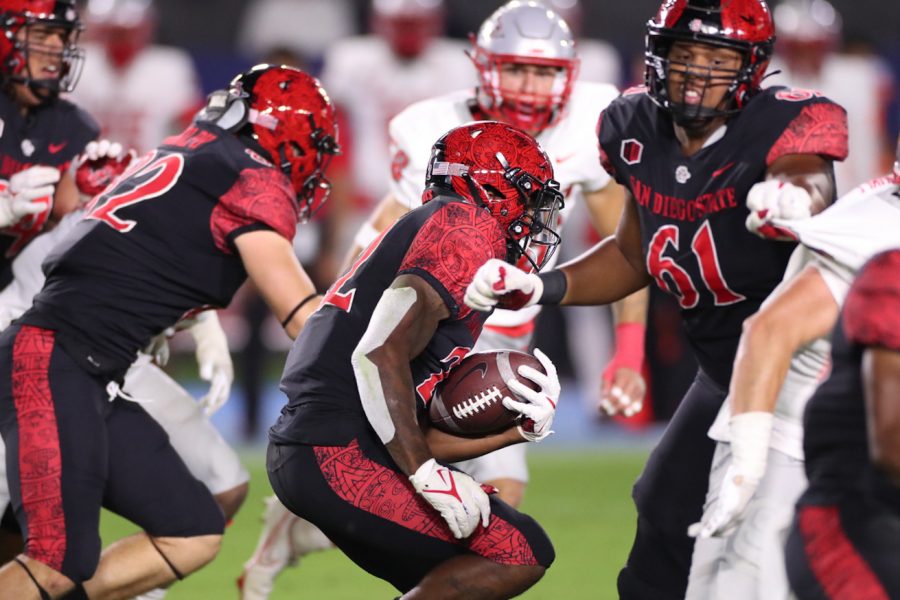 Senior running back Greg Bell carries the football against the New Mexico Lobos on Oct. (Courtesy of Derrick Tuskan/SDSU Athletics).

The Aztecs enter this week 5-0 looking to tie their best start in the last 40 years. The last time SDSU had a similar record was in 2017 when the Aztecs started 6-0.

In their last nine meetings, SDSU has gotten the better of SJSU, going 7-2 since 2012. Last season SJSU snapped a seven-game losing streak against SDSU — winning 28-17 — en route to an undefeated regular season and MWC championship, albeit in a truncated COVID-19 year.

Since graduate student quarterback Nick Starkel appeared to suffer an injury to his left arm — in a 23-3 loss to the Western Michigan Broncos — the Spartans have been in a quarterback limbo. Starkel was relieved in that game by freshmen quarterbacks Walker Eget and Natano Woods who, combined, completed just three of their 12 pass attempts for a measly four yards.

In the following game, junior Nick Nash received the start and, after defeating the New Mexico State Aggies 37-31 — while completing 83% of his passes with three touchdowns — it would appear the Spartans found their guy.

However, after a less than stellar performance last week in a 32-14 blowout loss to the Colorado State Rams, uncertainty remains surrounding the quarterback situation heading into this weekend.

The Spartans utilize a spread offense employing three or more receiver sets. SJSU is middle of the pack in both passing yards and touchdowns despite their pass-heavy approach.

The major flaw this team faces in its passing game is its quarterback carousel. Starkel is the more conventional passer, but Nash has demonstrated a higher level of efficiency in his short sample size. Nash averages more yards per attempt, has a 13% higher completion percentage, and has a 169.9 efficiency rating which far surpasses Starkel. Furthermore, Nash brings an element to the offense that Starkel can not provide — in his two starts, Nash has carried the ball 18 times for over four yards per rush.

The Spartans rushing attack ranks only eighth in the MW in terms of yards with 106.5 yards per game. However, this lackluster average is the result of their apathetic commitment to the run game. Senior running back Tyler Nevens has run well, averaging 5.5 yards per carry — which ties for best among qualified rushers in the MW.

The SJSU defense ranks eighth in the conference regarding total yards allowed. This includes an average run and pass defense with a MWC-worst: one interception and a bottom-tier sack total.

Don’t be fooled, these numbers don’t do justice to the Spartan’s stellar “bend but don’t break” red zone defense. They have allowed touchdowns on only 38% of their opponents’ trips to the red zone —  a conference-best. This is 20% better than the number two ranked defense, SDSU. The unit is spearheaded by senior linebacker Kyle Harmon, whose 58 total tackles lead the MWC.

The key to this matchup this week is who helms the offense for the Spartans. Nash has a history with SDSU, after leading the comeback upset over the Aztecs last year — with two passing touchdowns and another game-clinching score on the ground in the final minutes of the game  — in relief of an injured Starkel. The Aztecs should want Starkel to start because he doesn’t pose the same threat and Nash has proven he can pull off an upset. Nash should get the start but after last week’s stinker — if Starkel is healthy —  he may find himself back on the sideline holding a clipboard. Regardless of which Nick takes snaps this weekend, the Aztecs would love to serve a cold plate of revenge to the Spartans.