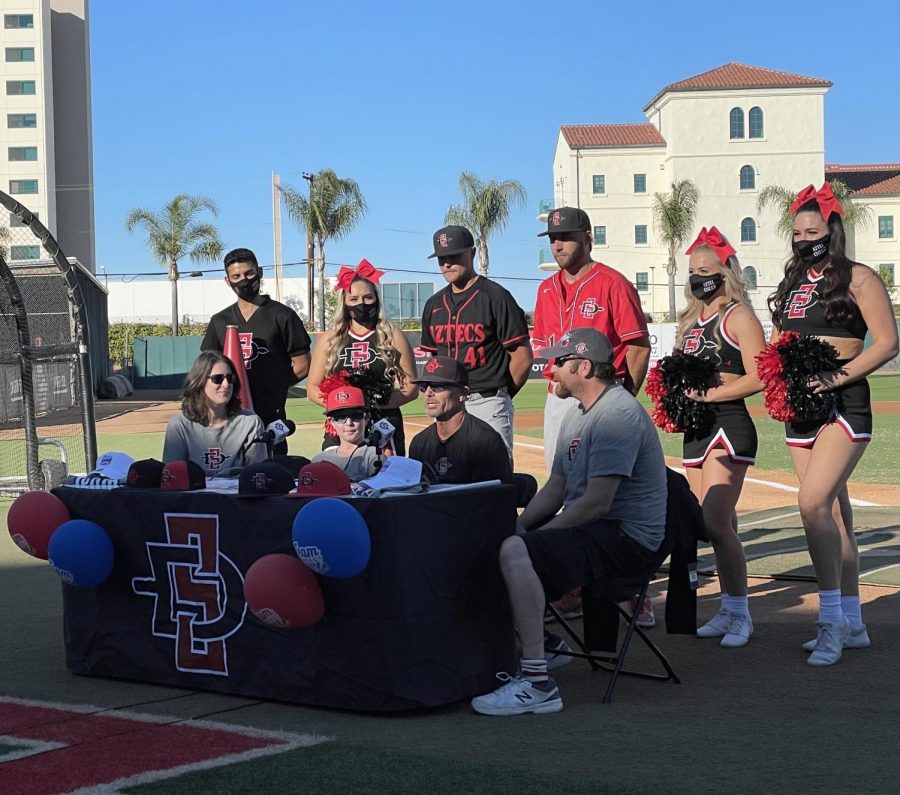 On Friday, Nov. 12, SDSU baseball signed their newest recruit, 10-year-old Nathaniel Wolpoff from Team IMPACT, to the Mesa for the next two years. His official National Letter of Intent signing was held at Tony Gwynn Stadium with his family, grandparents, new teammates and members of SDSU Cheer in attendance to witness the ceremonious moment in Nathaniel’s life.

Team IMPACT supports children who are fighting serious and chronic illnesses by forming lifelong bonds through the partnership of a college athletic team. They are working to tackle the emotional trauma and social isolation many children facing these illnesses experience.

Nathaniel suffers from Crohn’s disease, a chronic inflammatory bowel disease that affects the digestive tract lining. Through the two-year program, he will have the opportunity to develop relationships with the team and build skills that will help him heal.

While Nathaniel will be learning and taking on new skills from some of the players, he already has quite a bit of knowledge about SDSU baseball and in particular, legendary Aztec Tony Gwynn.

During his signing, head coach Mark Martinez quizzed him by asking Gwynn’s batting average, which Nathaniel was quick to answer with correct response. Martinez cited that some of his own players might not know that.

As a new signee and member of the team, Nathaniel will attend practices and team events, as well as serve as the batboy for all Aztec Baseball home games.

For the upcoming seasons of Nathaniel’s career as an Aztec, it will be something bigger than the game of baseball.

There will be an aspect of mentorship from the coaches and players, but also a mentorship role for Nathaniel to provide to the team and coaching staff.

Nathaniel will be able to teach the players and coaches about the joy of baseball, and the joy of life.

“The other part we have learned from him is the pure joy of baseball. He brings that, you see it all the time. He doesn’t worry about anything.” Martinez shared. “In fact, when he’s waiting while they (the players) are stretching, he can’t sit still. He’s doing phantom swings, he’s getting ground balls.”

In the short time that Nathaniel has been a part of the program — just around a month — he has shown positivity in his role as batboy against UCSD in the recent fall game.

“I think for us it is that he’s going to teach us the joy of life,” Martinez said. “He’s been a really pleasant person to have around our program.”

The Aztecs will have their home opener with the Tony Gwynn Legacy tournament Feb. 25 to Feb. 27 with opponents to be announced.

When attending an upcoming SDSU baseball game, make sure to look out for Nathaniel and say hello. Maybe even ask him for a fact about Tony Gwynn while you are there.