Aztecs shown no remorse on Senior Night, fall to Bruins 4-1 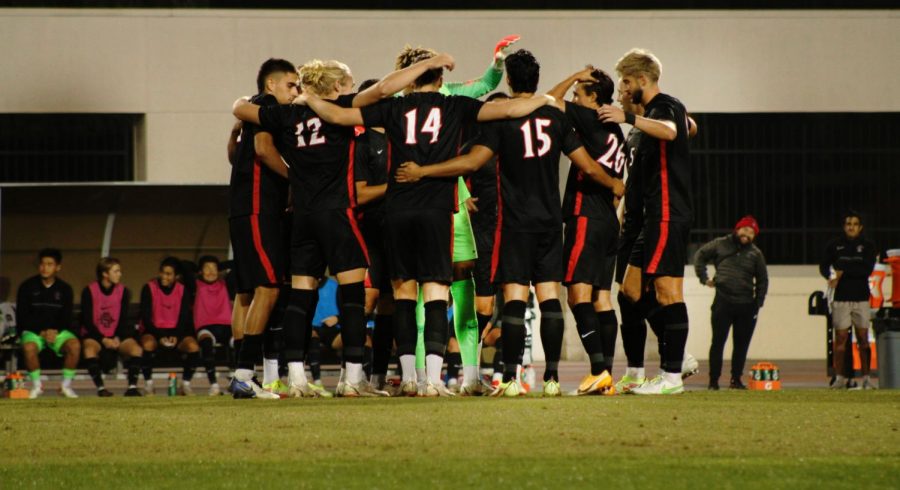 The San Diego State men's soccer team huddle up during a match against Oregon State.

UCLA was the aggressor early on as it took only thirty seconds for the Bruins to capture the lead. Sophomore defender Tommy Silva niftily finished the cross from redshirt freshman forward Jose Contell, shocking the Aztecs fans and giving the Bruins a 1-0 lead.

The Aztecs earned their first corner of the night in the ninth minute, but it ended up hurting them as the ball found its way to senior midfielder Arturo Chavez, who was alone near the halfway line. UCLA redshirt freshman midfielder Tucker Lepley applied the defensive pressure on Chavez and took the ball right from his feet. Lepley ended up finding Silva for his second goal of the day on the fastbreak opportunity created by the mental mistake from Chavez.

SDSU head coach Ryan Hopkins said these mental mistakes are “the sign of a young team and those are things that we can certainly train better.”

The first promising opportunity for the Aztecs came from junior midfielder Blake Bowen who created space and curled a shot towards the bottom right corner, but Bruins freshman goalkeeper Nate Crockford made a fantastic diving save. The shot from Bowen led to a corner for the Aztecs, but it would not be converted.

The Aztecs had an astonishing 15 corners on the night — 12 in the first half — and outshot the Bruins 13-8.

“I was really happy with the chance creation,” Hopkins said, on generating opportunities. He also gave credit to the Bruins keeper. “I think the goalkeeper played really, really well.”

The onslaught of corner kicks finally paid off for the Aztecs in the 44th minute when freshman forward Alex Hjaelmof whipped a beautiful ball into the box that found the head of junior forward Austin Wehner. This goal was a huge momentum shift for the Aztecs going into halftime.

“I thought we were going to go on and win the game,” Hopkins said when commenting on how important this goal was for the team.

After an eventful first half, UCLA would eliminate any hopes the Aztecs had during the second half. The Aztecs once again felt the pressure of the Bruin defense in the 51st minute when Aztec sophomore goalkeeper Jacob Castro held the ball a little too long in his own box and was dispossessed by Silva.

Silva brilliantly distributed the ball to Contell who barely got the ball over the goal line as freshman defender Tadfej Pirtovsek tried to clear the ball off the line, but was unsuccessful.

Lepley put the dagger in the Aztecs in the 72nd minute with a spectacular left-footed shot curling away from the outstretched Castro diving to his right and into the back of the net.

Though they fought hard to get the dub, SDSU ultimately fell short and ended what was once an extremely hopeful season on a sour note.