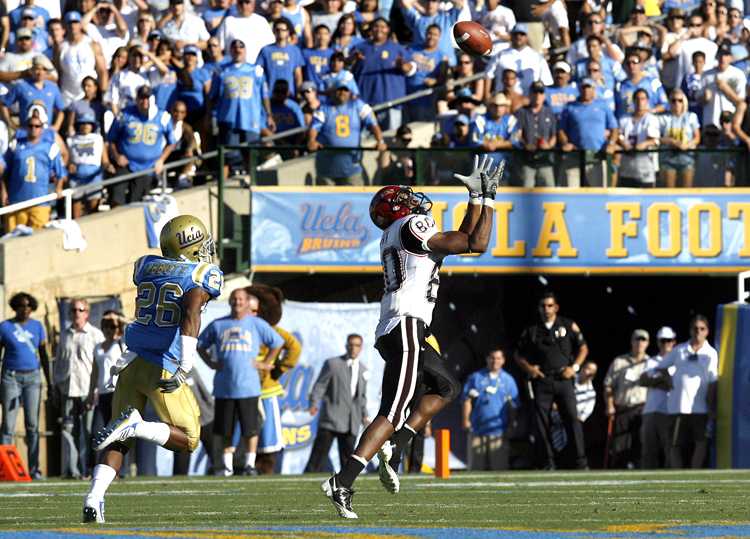 PASADENA — All it took was 16 seconds.

When the game clock showed three minutes remaining in the first quarter, the San Diego State football team and its fans were on top of the world.

Sophomore quarterback Ryan Lindley just scored his second touchdown of the game on a 78-yard bomb to junior wide receiver Vincent Brown to put SDSU up 14-3 against UCLA in the Rose Bowl.

But on the Aztecs’ ensuing kickoff, Bryan Shields’ kick went only 47 yards before the Bruins’ Terrence Austin returned the ball 65 yards to the SDSU 12-yard line. On the next play, freshman running back Johnathan Franklin punched the ball in for a UCLA touchdown.

Just 16 seconds of game time had elapsed since Brown’s touchdown, and that was all it took to permanently switch the momentum in favor of the home team as the Bruins (1-0) won, 33-14.

Of course, that play in the first quarter didn’t end the game, but from then on, the Aztecs’ (0-1) offense was unable to get in gear.

Including the touchdown to Brown, Lindley was seven of 10 for 142 yards with two touchdowns to start the game for SDSU. But after those first two drives, he went 11 of 35 for 94 yards and three interceptions to finish out the night.

“There were little adjustments (UCLA’s defense) made,” Lindley said. “But at the same time, it was really all about execution.”

The Bruins’ defensive adjustments held the Aztecs to fewer than 280 total yards while UCLA’s offense put up 359 yards on SDSU.

“I think you know they mixed some things up pretty well,” head coach Brady Hoke said. “Coverage-wise and also with pressure, and I think they dialed up some good things in there that gave us some problems and at the same time we had some opportunities we did not capitalize on.”

For the rest of the game, those missed chances doomed the Aztecs. After Lindley’s first pick during the second quarter, SDSU recovered a fumble by Bruins quarterback Kevin Prince. Despite the regained possession, the Aztecs went three-and-out, punted and gave up the go-ahead touchdown two plays later.

After another three-and-out by the SDSU offense, UCLA once again took advantage and marched down the field in six plays and went up by another touchdown, leading 23-14 going into the half.

While the offense never found its stride, the Aztecs defense found new life in the second half.

The Bruins were held to two punts and a field goal on their first three possessions of the half. On their fourth drive, sophomore linebacker Luke Laologi picked off Prince and returned the ball to the UCLA 23-yard line.

Three plays later SDSU set up for a field goal but had it blocked and returned for a 70-yard touchdown to seal the Aztecs’ fate at the end of the third quarter.

SDSU will get its opportunity to get to .500 when the Aztecs play host to Southern Utah on Saturday in their home opener at Qualcomm Stadium.