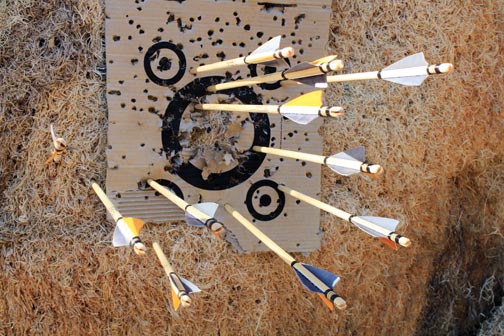 The forest is thick and many different sights, sounds and smells overwhelm your senses. You move quietly to avoid giving away your position. Suddenly, a branch cracks from a distance. Your eyes are quick to react and you see a deer. Your next move determines whether or not you eat tonight. Your hands begin to sweat and your heart rate skyrockets. But this is the moment you’ve been waiting for. You take an arrow from your quiver and ready your bow, pulling back on the tense string that will send the arrow with deadly silence and precision to its target. You slowly exhale, and fire.

While the Rube Powell Archery Range in Balboa Park isn’t quite as dramatic, it’s a great place to spend a sunny San Diego day. This 28-acre archery haven is located right off the Alcazar Garden parking lot, which is accessible by taking Highway 163 to the park area and crossing the Cabrillo Bridge. Both this range and the accompanying target range, Morley Field, are the only remaining public archery ranges in southern California.

Before embarking to Balboa, I had never shot a bow, nor had I seen someone shoot one. I also didn’t know where I was going, so I enlisted a couple of companions who had been to the range before to join me.

Upon entering the range, it’s easy to see why people love coming here. The first target shooting area overlooks the rest of the range, which is shrouded in a forest of palms and eucalyptus trees. We put our $2 fee in a little red drop box and sat down to watch other archers practice their form.

Then, someone entered the range who immediately drew our attention. The man approaching us appeared to be from another era. He looked like he could have been a demon slayer or a werewolf hunter from “Van Helsing.” The tall, skinny figure wore black leather boots, jeans and a black leather jacket. His long handlebar mustache began brown and faded to gray as it stretched well below his chin. His eyes hid behind gold-rimmed John Lennon sunglasses and he wore a brown fedora with a feather sticking up from the hat’s black band. He sported a leather banded, gold-rimmed wristwatch. A small gold earring hung from his left earlobe. A black leather quiver was slung around his right shoulder, which held his homemade aluminum arrows and an old combat knife. He stood behind his recurve bow, which lay on a table. A cigarette burned in his right hand. Before us stood a man simply named Sir Gordon.

Gordon, 67, has been a regular at the Rube Powell range for more than 50 years. Archery has been a part of his entire life.

“I’ve got hillbilly beginnings,” Gordon said. “I used to take the lids off tin cans and bend them back to make broadheads (a type of arrowhead) and fashion them to a piece of wood to make arrows.”

But Gordon’s hillbilly beginnings evolved into something much more. This is a man who puts “Sir” before his name because he was once the victor of the annual King Arthur Tournament held at the Rube Powell range (see bottom left photo on page 11). He even hosts the Sir Gordon’s Traditional Shoot, where only longbows and other traditional-style bows are allowed. Years of practice have given him the ability to know if a shot was good just by the feel of his release and the sound of the string on his bow. He equates this feeling to using a typewriter.

“It’s like when you’re typing without looking at the keys,” Gordon said, “and you hit a wrong one, and you just know it by the feel.”

He demonstrated shortly thereafter. He lifted his bow—a gorgeous, laminated combination of ebony, Indian rose and ash woods made in 1964—and notched one of his silver arrows in the string. The motion that began with pulling from the quiver and ended by releasing the shot happened with unexpected rhythm and grace. His first two shots down-range sailed slightly to the left. His body language suggested he wasn’t thrilled with the result. But his third shot hit the target’s bulls-eye with a resounding thud.

“There it is,” he said confidently.

He only shot through one quiver full of arrows that day because he was testing his new tab, which is yet another piece of leather equipment. It protects the finger that pulls back on the string of the bow.

“It’s needed because pulling on these things can be like plucking piano strings,” Gordon said. “It hurts.”

Gordon is what archers call a traditionalist. Nowadays, he uses only recurve and longbows, the kind of equipment one might expect an archer to carry. He has given up using high-tech compound bows—in fact, he gave his collection of at least seven compounds to his son.

“He brought up the will one day over the phone and I knew he was hinting at something,” Gordon said. “So, he says that he’s had his eye on one of my compound bows and I told him if he came and visited me, he could have them all.”

Gordon lives by, at least in part, two acronyms. The first is K.I.S.S.: “Keep it simple, stupid.” This explains his equipment, but what of his overall style? He calls it the S.W.A.G. style. But you won’t find Gordon using the term in the same way you’ll hear it used on campus.

“It stands for ‘scientific wild-ass guess’,” Gordon said. “You have to know your equipment and what it can do, but the rest is getting your body to accommodate.”

He has shot competitively and even hunted. But what makes Gordon seemingly addicted to the sport of archery is what goes on behind the bow.

“It’s a mental game with yourself,” Gordon said. “You’re the only one you’re trying to beat. Even when you’re shooting competitively—sure there’s another guy you’re trying to outscore—but it’s still you.”

As Gordon walked back up the hill after retrieving his arrows, he pulled the combat knife from his quiver and handed it to one of my friends to examine. It’s called an M6, a knife issued to him and his fellow marines during the Vietnam War. As he looked down at the knife, he thought back to a time when being a soldier meant fighting overseas and returning home to a similarly hostile battle with your own people.

“The way people treat our boys today, I tip my hat to them,” Gordon said, “because when I came back from Vietnam, people treated us with hostility. That was not cool.”

But what is cool is that Gordon is extremely involved with the San Diego Archers and the rest of the archery community that loves the Rube Powell range. He has a true passion for archery and is quick to say hello to fellow archers and ask about their bows. What is cool is that he had a photo of himself being knighted at the King Arthur Tournament, which he proudly shared with us.

So next time you’re bored and want to try something different or want to relieve some stress built up from classes, head to the Rube Powell Archery Range in Balboa Park. You’ll be glad you did and, if you’re lucky, maybe you’ll get to talk with Sir Gordon.