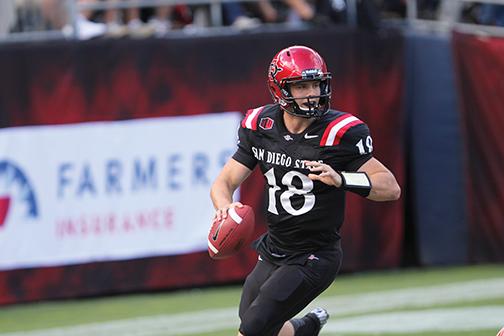 The next challenge for the San Diego State football team will come this Saturday when the Aztecs go on the road against the New Mexico State Aggies.

The Aggies, like the Aztecs, are still looking for their first win of the season.

Peel back the layers of heartbreak from the loss to Oregon State and it becomes clear that SDSU has a lot of positives to build on as they look forward to this Saturday.

Barring two critical mistakes late in the game, junior quarterback Quinn Kaehler showed a lot of promise. In fact he had the highest passing efficiency rating for an Aztec debuting as a starter since 1997.

Kaehler completed 16 of his 25 passes for 251 yards, two touchdowns and two late interceptions. He and the rest of the SDSU offense seemed to flow the best it has all year in the first half against OSU.

SDSU’s defense was solid until the fourth quarter. At that point, OSU junior quarterback Sean Mannion hit his groove and led three touchdown drives en route to his 367 yards passing for the night.

However, the Aztec running defense never lost a step. It allowed only 10 yards on the ground for the entire game.

Let’s break down this Saturday’s game against the Aggies and see who has the advantage.
Offense
Offense is definitely the Aztecs’ weakness. Kaehler proved he can play well as a starter, but he also proved he can make mistakes at crucial points in the game.

With a young offensive line and a running back core limited by injury, SDSU’s running attack is not what it used to be.

The Aggies have two solid quarterbacks in senior Andrew McDonald and freshman King Davis III. The two have combined for 940 yards and five touchdowns. NMSU running backs have also had better success than SDSU’s running backs this year.
Edge: NMSU
Defense
The Aztecs completely shut down the Beavers running attack. Holding a team that started the year in the Associated Press Top 25 Poll to just 10 yards for a game is incredible. SDSU’s cornerbacks showed great improvement in the first half against OSU.
Edge: SDSU
Intangibles
The Aggies will be just as hungry as the Aztecs to get their first win of the season. However, the University of California, Los Angeles pummeled the Aggies last week. SDSU, on the other hand, barely lost in a hard-fought game against a very good team.

[quote]As senior wide receiver Colin Lockett put it, “We got the guys, we got the coaches. We got the mentality and the attitude. It’s just so close, and really, you see it.”[/quote]