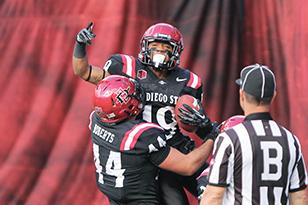 The San Diego State Aztecs beat the New Mexico State University Aggies 26-16 for their first win of the season.

But the game didn’t begin very well for SDSU.

NMSU senior quarterback Andrew McDonald completed seven of his nine passes on the Aggies’ first possession and put his team in front 7-0 with 10:10 left in the first quarter.

After an unsuccessful Aztec possession, NMSU wore out SDSU’s defense on a 69-yard drive that culminated in a 28-yard field goal by Aggie junior kicker Maxwell Johnson to extend the Aggies’ lead to 10-0.

SDSU finally got on the scoreboard early in the second quarter. In a bizarre play, the Aztecs’ special teams unit blocked a NMSU point after touchdown attempt. Junior defensive back David Lamar picked up the ball and ran 98 yards to the opposite end zone for a defensive 2-point conversion to make the score 16-2.

The Aztecs dominated the rest of the game.

Two SDSU players dominated the second half and proved themselves worthy of significant roles on the team.

Junior quarterback Quinn Kaehler’s statistics weren’t eye-popping—he completed 22 of 34 passes for 229 yards. However, he was almost unstoppable in the second half, completing 71.4 percent of his passes for 88 yards and leading three touchdown drives, including a momentum-shifting 14-play, 69-yard drive in the third quarter.

At the most critical points in the game, Kaehler demonstrated a high level of football intelligence and kept the ball safe, even if that meant not getting a first down.

The biggest surprise of the game was true freshman running back Donnel Pumphrey’s stunning performance.

Junior running back Adam Muema couldn’t find his rhythm in the first half, only running 22 yards and having six carries. Consequently, Pumphrey got most of the carries in the second half.

Pumphrey’s breakaway speed, ability to find the defense’s soft spots and impressive power helped him run for 167 yards and three touchdowns on 19 carries.

Pumphrey had many remarkable runs, the most notable was his 43-yard touchdown run in the fourth quarter. The freshman running back now leads the team in rushing yards, 220, and rushing touchdowns, three. If he keeps playing like he did on Saturday night, Pumphrey could lead those categories at season’s end, too.

It was a long time coming, but the Aztecs won their first game. The first quarter and a half looked a little disjointed, but from then on the Aztecs played great. They scored 26 unanswered points and shut out the Aggies for the last 42:52 of the game.

Head coach Rocky Long could finally smile in the postgame conference and talk about his team’s victory. He didn’t spend too long celebrating the victory, however.

[quote]“We need to get a whole lot before we play again Friday night,” Long told reporters, speaking of when the Aztecs open Mountain West Conference and played against the University of Nevada, Reno.[/quote]

The game starts at 6:00 p.m. on Friday at Qualcomm Stadium and will be aired on ESPN.