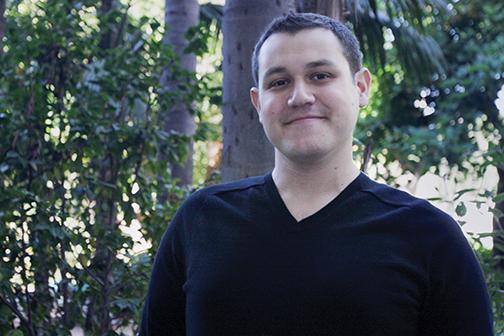 San Diego State graduate Brandon Maier is the director for the musical “Little by Little,” which is now playing at the Experimental Theatre. He has studied here as both an undergraduate and graduate student for musical theater, and is currently working as a staff member. “Little by Little” is Maier’s fourth show as a director; he’s also in charge of production and operations.

The Aztec: How did you get into “Little by Little?”

Brandon Maier: When I was a freshman in my musical theater class, our faculty member Rick Simas introduced me to one of the songs for class, and I started to really like it. I started to learn more and more about it. And it’s a show no one has ever heard of, nobody knows it. It’s a really sweet story and I liked it ever since.

TA: What about the story grabs you?

BM: The story itself is about three best friends who grew up together, and the trials and tribulations that come when it stops being about friendship and starts being about love. The characters don’t have names. Their names are Man I, Woman I and Woman II because it’s a story that could be about any of us. Because we all had those type of situations in our lives where you’re good friends with a guy or a girl, you like them and your friend likes them, and it turns into a big mess.

So, what I love about it is that pretty much anybody can relate to it, especially since the characters start at age 11 and then at the end of the show, they end up in their late 20s. We’re able to understand their situations that are going on the stage.

TA: Would you say “Little by Little” is a story about friendship or romance?

BM: The way I usually describe it, it’s a musical that explores the difference between friendship and romance. It’s very much about both, about how being friends with someone can evolve into a relationship in a positive and negative way. How being in a relationship can affect your friendships outside of that connection. Those two things are intertwined.

TA: Would you say it’s also a comedy?

BM: I would probably characterize it as a comedy. There are dramatic moments but, generally, it’s upbeat, fun and very comical.

TA: As the director, what was your unique direction for the show?

BM: It’s funny you say that because with so many shows, you have to have your own vision of what’s going on. It’s important to have a very specific view. You don’t want your direction to be like everything else and you want your own ideas with it.

Since not too many people are aware about “Little by Little,” I got the opportunity to not have any guidelines for what I have to do. For me, it’s a lot about finding out who these people are. I want to make them as realistic as possible. In musicals, it’s common that characters aren’t very real. They’re bigger than life and we don’t sing in real life.

This show is entirely sung through—no dialogue. Every line of it. Maybe three lines of dialogue dispersed through. That’s just how their universe works. So we get to really focus on how each character is incredibly realistic and diverse. They have virtues and vices.

We get to focus on when they are showing their good parts and bad parts of them because none of us are all one thing. It’s exciting to be able to explore it. And I have very talented actors that bring that into rehearsal to make it really realistic for those circumstances.