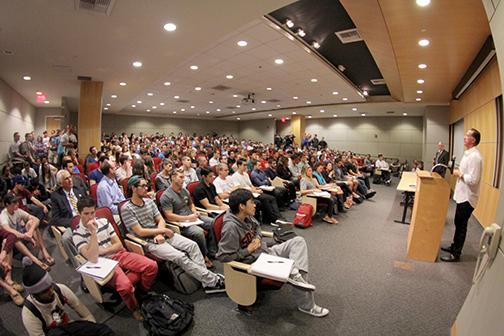 Volcom Inc. co-founder and San Diego State alumnus Thom McElroy spoke to students on Oct. 22 as a part of a lecture series by the Lavin Entrepreneurship Center.

McElroy, who graduated in ’85 with a major in graphic communications, spoke about his experiences building a $400-million surf and skate company.

“I do this because it’s something I should have taken advantage of when I was here,” McElroy said. “A lot of people have helped me out and I want to give back.”

McElroy has also been involved in the Lavin Entrepreneur Program for the past six years.

“I love their ambition and where their heads are at,” McElroy said about SDSU students.

McElroy also spoke prior to the event to a small group of students who were a part of the Lavin Entrepreneur Program.

“It was more intimate and free-flowing,” McElroy said. “We got to talk about how luck is by design, being passionate, and taking risks.”

The main lecture focused largely on luck by design, as McElroy highlighted the three main aspects that drove his success: passion, risk and trust.

“You will see great success if you go all in,” he told the audience. “Be prepared to fail. I have failed miserably over the years, but it’s how you react.”

During the lecture, McElroy discussed the process of building a company, from gaining funding to designing Volcom’s distinct stone-shaped logo.

“In the early days, if you get the opportunity to go out there and crush it, you’ve got to do it,” McElroy said at the event.

The lecture was hosted by the Lavin Entrepreneurship Center as a part of the  L. Robert Payne Distinguished Entrepreneur Lecture series. The event, which took place in the Fowler Athletic Center Auditorium, was free to all SDSU students and faculty.

Many students were eager to gain insight from someone with real-world experience.

“I’m here just to learn more,” graduate student Alex Le said, who found out about the event through an email sent by the career management center. “I want to hear the experiences from a successful leader.”