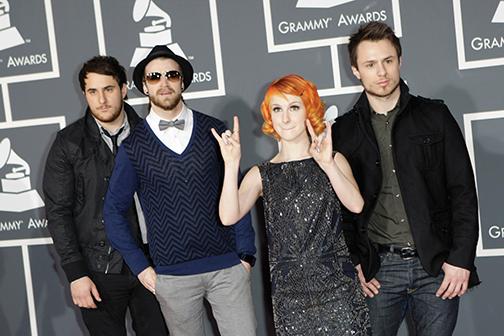 On Oct. 23, pop-punk band Paramore performed an incredible show of The Self-Titled Tour at Viejas Arena. The band played at the San Diego State venue for the Honda Civic Tour with Tegan and Sara before in 2010. Now, the band came back to the Viejas Arena supported by Hellogoodbye and Metric in promotion of its album released earlier this year.

As the lights went out in the venue, the synthesizer line of “Grow Up” began to loop. The curtain dropped and revealed Paramore and its huge three-bar logo standing tall behind the band. The slick guitar lines and frontwoman Hayley Williams’ tough delivery in “Grow Up” made a great opener to kick off the night. When the song was done, Williams gave out some warm-up vocals and pointed the mic at the crowd for it to sing right back. It cleverly led to “That’s What You Get” in which the same vocals are shouted as the hook.

Paramore’s set list covered a lot from its catalog. Debut single such as “Pressure” and “Decode” from the “Twilight” soundtrack were a few of the wide selections. One surprising song was a cover of Fleetwood Mac’s “Landslide,” which played in the middle of Paramore’s “In the Mourning” as a medley. The band also played its interludes from the new album throughout the set with each signaling a change in vibe. After the first interlude, “Moving On,” the band began to play its ballads. The band continued its energetic singles after the second interlude “Holiday.”

When the band played its hit single “Misery Business,” Williams stopped singing during the bridge section and chose one person from the crowd to get up on stage and join her in the song. One lucky girl was handpicked by Williams to shout along and finish the rest of the song with the band. It must have been her wildest dream come true.

The third interlude “I’m Not Angry Anymore” came on to signal the encore. Paramore finished the show with its current big single, “Still Into You.” As the song went on, green and blue balloons started to come down. When the song reached its final moments, orange confetti shot up and filled the crowd. It was a fittingly colorful view for a fun and colorful song. With balloons and confetti still in the air, the band members gave a bow and waved goodbye. Paramore came and conquered San Diego once again with another triumphant evening.