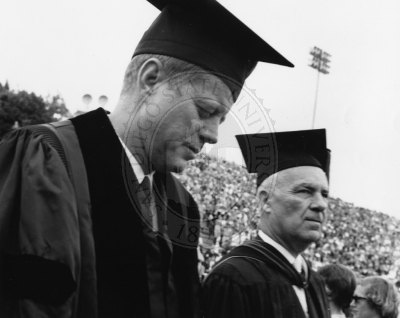 by Alumni Codices
I vividly remember the period of the Kennedy presidency and especially the assassination.

I graduated from high school and began college in 1960 and followed the presidential campaign with great fascination and enthusiasm. I saw both candidates give campaign addresses in San Diego and watched each of the debates. I clearly recall the excitement of the election night cliffhanger and still enjoy periodically perusing the classic account of that campaign “The Making of the President-1960” by Theodore White. I vividly recall watching the inaugural address during a college public speaking class.My grandfather had been a 1912 classmate of Joseph P. Kennedy at Harvard and both families, including my father & John Kennedy, attended the 25th class reunion in 1937. During that reunion according to family lore my high school senior father trounced Harvard sophomore JFK in a game of pool, and one of my younger uncles subdued the scrawny, pugnacious twelve year old Robert Kennedy in a wrestling match.

Due largely to the Kennedy influence I decided to major in history.I clearly recall most all of the significant events and actions that occurred during the Kennedy presidency including the failed invasion of Cuba, the establishment of the Peace Corps and the Alliance for Progress, the first  astronaut launchings, the Vienna summit and the Berlin crisis in 1961, the successive civil rights crises in Alabama & Mississippi, the steel price hike imbroglio, the crises in Laos and Vietnam culminating in the Diem assassination, and especially the Soviet/Cuban missile crisis of 1962 and its aftermath including the Nuclear Test Ban Treaty. For superb accounts of that crisis I highly recommend “One Minute to Midnight” by Michael Dobbs and “Khruschev’s Cold War” by Naftali and Fursenko.

On June 6, 1963 President Kennedy received an honorary Ph.D. degree and gave the commencement address in the Aztec Bowl at San Diego State College which was attended by an estimated 30,000 people including myself. The subject of his speech was the excellence of the public higher education system in California and the need for Federal aid for education in poorer sections of the country to enable improved educational opportunities including more affordable higher education. This speech is reprinted in “The Burden & The Glory” and is accessible via YouTube. It is a moving and compelling speech that  continues to have resonance today. He made a similar speech at the University of Washington in 1961 on the occasion of its centennial anniversary. This speech is also accessible via YouTube.

At about 10:45 AM PST on the morning of November 22, 1963 I was on break between classes in the Social Sciences building at San Diego State College when I first learned of the assassination attempt from a cluster of students listening to a transistor radio in the hallway. I immediately walked over to the Daily Aztec school newspaper office which had a television set and saw a large group of staff and students hovered around it in a state of shock and disbelief. At about 11 AM we watched Walter Cronkite make the fateful announcement. I will never forget that moment. Shortly thereafter a public address announcement was made that all further classes that day had been cancelled. As I was walking to the parking lot I observed the flag being lowered to half-mast. I recall hundreds of students all walking to their vehicles in complete silence and shock.

I recall my parents, sister and I being glued to the TV set all weekend. We watched Friday night as Air Force One taxied up to the ramp at Andrews Air Force Base. As the casket was being lowered I believe it was the NBC network that was playing the sombre second movement of Dvorak’s New World Symphony which was overwhelmingly overpowering. I recall the first glimpses of Mrs. Kennedy and President & Mrs. Johnson. I recall the President’s brief sensitive and reassuring remarks. My most vivid remembrance of the funeral was the long parade of top leaders from around the world led by the dignified, sombre Prime Minister Harold MacMillan of Great Britain and the towering, regal visage of President Charles deGaulle of France.

Upon return to classes the following Tuesday I recall my 20th century American History class professor walking in and stating “Thank God for Lyndon Johnson.” Referring to the recent awarding of the honorary degree the college Daily Aztec newspaper heading that day was “He Was One Of Us”.  I still have that paper as well as the November 22nd San Diego Evening Tribune (7th Extra Edition) with its 3 inch bold headline:  KENNEDY DEAD