‘Fall is a Drag’ definitely no drag 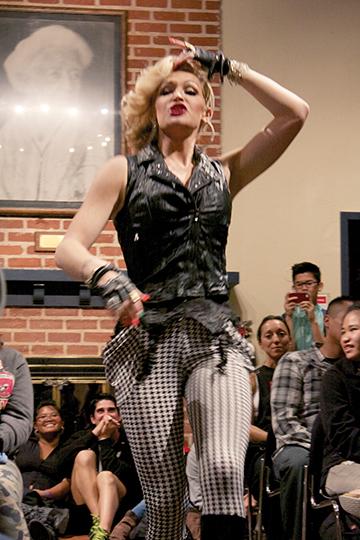 Fleur DeLicious and Aviana Shakwanda Samson were the emcees of the evening, and they kept the audience entertained with witty and often risqué banter between performances.

The performances themselves were flamboyant and energetic with plenty of audience interaction. The drag queens and kings sashayed around the room, dancing with unsuspecting members of the audience and getting everyone on their feet, singing, dancing and clapping along.

One of the evening’s most memorable numbers was Aviana’s “Single Ladies/I Wanna Dance With Somebody” mashup. She danced and lip-synced with such passion that at one point, her wig actually came off. Unfazed, she continued her performance, twirling the wig around as a prop.

Justin Case gave another outstanding performance to the tune of the Village People’s “Macho Man.” He was appropriately dressed as a construction worker, and proved his “machoness” by bringing a random audience member onstage for a push-up contest.

Fans of “American Horror Story” went wild for Fleur DeLicious’s performance, set to the series theme song, a cover of “House of the Rising Sun” by Lauren O’Connell. The song later switched to “Strange and Beautiful (I’ll Put A Spell on You),” but the performance climaxed with soundbites from “American Horror Story.” Fleur, dressed in a witch’s hat and black corset, mouthed along to Jessica Lange’s voice, saying “In this whole, wide, wicked world, the only thing you have to be afraid of is me.”

Smokey Gonzalez gave a comedic and energetic performance to the ever-famous “Gangnam Style,” imitating the various moves Psy shows off in the video. Of course, he also got several of the audience members to do “Gangnam Style” dance during the chorus.

Sonique Love was the special guest of the evening, and she wrapped up with a special and passionate performance that had the audience totally captivated. Sonique was a cast member on the second season of “RuPaul’s Drag Race,” and currently performs with the Dreamgirls Revue touring Southern California.

After the performances, the drag kings and queens invited the audience to stay for a Q-and-A session. Most of the audience stayed to ask questions about how the performers got into the drag scene, what inspired them and if they had any advice on the best gay or lesbian bars in San Diego.

Overall, it was a glittery, enthralling evening, bursting with impressive costumes, dancing, lip-syncing and more.

If you missed out this time, don’t fret. Similar performances can be caught around San Diego at places such as Lips or Urban Mo’s Bar and Grill with the Dreamgirls Revue.

Correction: ‘Life is a drag’ was organized by the Queer Student Union as part of its 27th bi-annual Big Gay BBQ