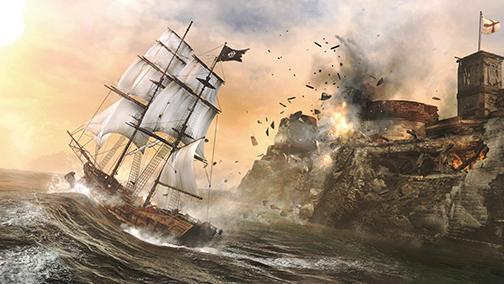 Because Black Friday already passed, and Christmas is just around the corner, games are one of the items most frequently on sale. When you’re dropping a hefty $60 on a new release, you should always be wary of the quality of the game you’re buying.

This year, Ubisoft released the latest iteration in the fast-growing “Assassin’s Creed” series, just in time for the holiday season. This time, you should try your best to grab it on sale—it’s not quite worth the full $60.

I have been a huge supporter of the “Assassin’s Creed” series ever since the first game dropped in 2007. It was a breath of fresh air for console gamers: an open-world, historically fictional stealth-action game. But don’t let the “IV” in “Assassin’s Creed IV: Black Flag” fool you; this is actually the sixth console release in six years. I’m not the biggest fan of yearly releases. One of my biggest gripes is, what makes this so much different than last year’s game? As much progress as there has been in the series, there have also been too many steps back this year for my taste.
Spoiler Alert for “Assassins Creed III”
With the death of the series’ leading man, Desmond Miles, you take control of an unnamed Abstergo Industries employee. Using Desmond’s memories, the player’s job is to collect as much information as he or she can to create the most cutting-edge, realistic pirate film. Basically, researching the very game being played. It’s all very meta and surreal, almost laughable when you first hear it, but it gets the job done for moving the story forward. With Desmond’s death, developer Ubisoft Montreal had the opportunity to stray away and start a new storyline. As usual, supernatural hijinks ensue and we’re back where we started.
End Spoilers.
You play as Edward Kenway, a pirate turned assassin and grandfather to the main character of the previous game. He’s just as deadly and cunning as all the other main characters, but what’s off-putting about playing as Edward is that he has little to do with the Assassin organization. He literally finds the clothes of a fallen assassin, throws them on, and continues on his piratey way.

The disassociation from the previous games doesn’t stop there. Missions are highly repetitive and teeter on borderline annoying, as you tail, eavesdrop and follow targets, perform remedial tasks and do little of actual assassinating of any important targets. One of the first quips I ran into was how Ubisoft Montreal decided now would be a good time to change up the controls, six iterations into the series. The animations this year feel as if they’ve taken a step back. Free running, a staple and defining point of the series, has taken a hit, visually and physically.

Edward moves in a clunky fashion, and the game makes it almost too easy for players to traverse what would be challenging heights and narrow lengths. The series had it down by the second game—the controls were tight and the animations were fluid. But now, “Black Flag” feels as if it has taken way too many steps back. It’s the small muck ups that are baffling, and these small things add up to hurt the user experience. At the end of the day, it’s a little disheartening to longtime fans, such as myself, to see how much a series can change, and not always for the better.

But enough about the bad. Let’s focus on what “Black Flag” brought to the table this year. “Black Flag” took the naval battles that were a side feature from “Assassins Creed III” and made them a complete component to the game. You are able to freely sail from port to port in the luscious Caribbean islands, upgrade ships to your personal liking and even command a small fleet. You invest so much time on the ship and away from land, it’s almost too hard to dock in the ports and get back to reality grinding away the mission objectives. “Black Flag” stands better as a glorified pirate simulator than an “Assassin’s Creed” game. Even though the Xbox 360 and PlayStation 3 aren’t the latest generation of consoles anymore, the game still looks great on dated hardware. The islands, oceans and jungles look amazing. Filled with vivid colors and vibrant landscapes, you’ll enjoy every minute you have soaking in the surroundings. It’s a nice upgrade from the sandy cities inside Jerusalem, or the snowed out early North American colonies.

Take “Assassin’s Creed IV: Black Flag” for what it is. Jump in looking for a solid, engaging pirate game, but don’t go looking for the next cutting-edge “Assassin’s Creed.” You won’t find any of that buried treasure here. You’re much better off on your own enjoying the seas, no matter how rough they get.
Rating: 3.5/5
Also read: ‘League of Legends’ World Championships Elevates eSports Scene to the Masses