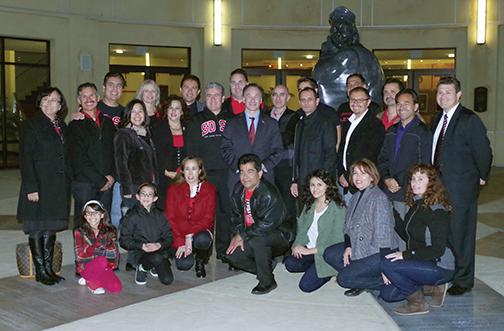 In 1983, a group of Latino students, who later became known as the group La Plebe, arrived at SDSU. The beginnings of La Plebe can be traced back to this core group of engineering students that banded together as a result of their common cultural backgrounds during a time when the Latino presence at SDSU was scarce. La Plebe found that group members had naturally gravitated toward one another as a way to provide a social and educational support system for students that shared a Latino heritage, former La Plebe member Armando Garcia said.  He graduated from SDSU in 1990 with a civil engineering degree.

“I think without this group, some of us may not have made it and dropped out,” Garcia said.

“The fact that we had such a big support system within the group really encouraged everyone to keep on going,” Garcia said. “More than anything else, that is why I am thankful for this group.”

La Plebe would often meet in the SDSU Love Library for study sessions and eventually adopted the Chicano Collection room as an unofficial meeting room and headquarters.

Throughout the years, other Latino students joined La Plebe, creating a more diverse group of majors, including business, social sciences and education. By 1990, the group achieved recognition for having 27 Latino engineering students in that year’s graduating class.

In 1996, La Plebe purchased a stone paver during the remodeling of the Love Library to show its lifelong dedication to SDSU. The 30-by-30 paver, located in front of Love Library, reads, “La Plebe, Aztecs since 1983” above the SDSU centennial emblem.

“Initially, La Plebe started as an academic support group. We came together to fill a void the system back then didn’t provide for us. Together, we encouraged each other and got through college,” Riesgo said. “And then it grew to what it is now, not only a group to hang out and have fun, but also a networking system for jobs and business ventures. For most of us, this group has become a big part of our lives. In some way or fashion on a daily basis La Plebe is part of our routine.”

Today, La Plebe members are leaders in their professional fields, and the group remains connected as a reminder of its hard work and achievements. La Plebe also continues to be a strong supporter of SDSU Athletics and regularly gets together to attend football and basketball games.

A second generation of La Plebe is now making its way through SDSU as children of former members have begun attending the school.

Criminal justice junior Rodrigo Peraza is the son of La Plebe member Marcos Peraza, who graduated in 1990 with a degree in civil engineering. He said that to this day members of La Plebe remain close friends, getting together for holidays, special events and Aztec games.

“I think it’s important to recognize them because they’ve invested in this school, supported so much over the years and deeply committed themselves to involving themselves in the SDSU community,” Peraza said.