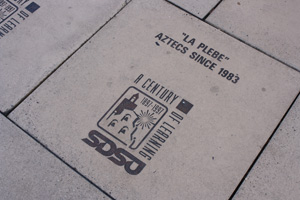 Around 1983 the first of a group of Latino students that later became known as La Plebe arrived on the SDSU campus. They came from different parts of California, the United States and some from other parts of the world. The origins of La Plebe can be traced back to a core group of engineering students that shared a common background – generally native Spanish speakers reared in the Latino culture with a significant number being first generation immigrants. The group found itself at SDSU at a time, the 80’s, when Latino influence on the campus was less than pervasive. Because of their common roots and heritage, the group naturally gravitated towards one another as a way to provide a social and educational support network for themselves. The group would meet at the SDSU Library for study groups and eventually adopted what was then the Chicano Collection Room as their unofficial headquarters. The group grew larger as other students exposed to the atmosphere of camaraderie and support joined in. The group became diversified as students with varied majors such as business, social science, education and others became regulars at the Chicano Collection. Eventually the group began participating in campus activities with groups such as SHPE, MABA, MECHA, and Upper Bound among others. The group gained prominence in the mid 80’s through its participation in intramural sports under its adopted name, La Plebe. La Plebe’s success in intramural sports such as soccer and basketball gave the group name recognition and status as an influential group.

By the late 1980’s some of the Plebe members began graduating from SDSU with degrees in engineering, accounting, political science and economics to name a few. The group began its transition from student life to professional life. Since then, La Plebe members have remained connected to SDSU through participation in various activities including the Alumni Association with the Los Aztecas chapter. In an act of group unity and support for SDSU, when Love Library was remodeled in the 90’s La Plebe purchased a paver. (Refer to photo on left.) As an expression of our Aztec Spirit the group took a group picture in front of the new library dome. La Plebe also is a strong supporter of SDSU athletics as some members regularly attend football, basketball and other sporting events. La Plebe also remains connected through social activities such as yearly summer picnics, Christmas “posada” celebrations, and parties during major holidays such as Memorial Day, Labor Day and the 4th of July. Recently the group came together for a 30th anniversary reunion where many of the members and their families shared memories from 30 years of La Plebe history.

Today La Plebe members are leaders in fields such as engineering, law, business, education and government. The group remains strong and connected as the common bond of culture, language and now a strong history of hard work and achievement ties its members closer together. There is even now a second generation of La Plebe as some of the children of Plebe members currently attend or have graduated from SDSU. La Plebe has come a long way since its humble origins in 1983. What started out as a small group of students looking to survive the college experience, through the values of culture, mutual support and belief in education, now thrives as a successful group of professionals that are a credit to its community. They are a great example of a group who is realizing the American Dream.

Ramon Riesgo graduated in 1991 with a degree in aerospace engineering and is a founding member of La Plebe. He now works for the General Services Administration.