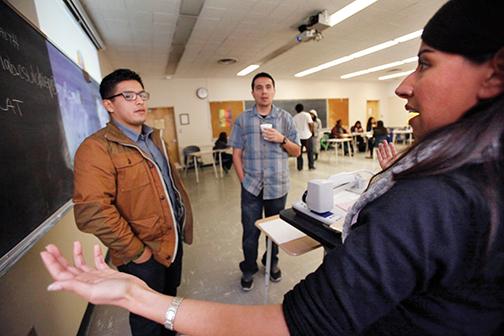 A recent poll shows 30 percent of students in the California State University system may be uninsured and the high cost of healthcare is the principal reason for this trend.

The survey, which was a part of the CSU Health Insurance Education Project, is meant to educate students in the CSU system about affordable insurance options through the Affordable Care Act, also known as Obamacare.

The poll, which was conducted at CSU Fresno, CSU Los Angeles and San Jose State University, revealed 80 percent of uninsured students reported they didn’t have health insurance because they couldn’t afford it.

HEIP Director and CSULA Department of Public Health Chair Walter Zelman said education is the key to getting students covered, because many aren’t aware of all the options the ACA offers.

“(Students) say they don’t have insurance because they can’t afford it, because it is too expensive,” Zelman said.
“Obamacare is going to make it more affordable and in some cases free. That’s why it is important for us to educate the students.”

“Emphasis in the media is placed on the negative shortcomings of the law, but what Nicole and I see is appreciation of students who have lived in fear of illness and can finally afford to have health insurance,” Ackerman said. “Of course, there have been bumps along the way, but our health care system is broken and repairing the years of damage is not going to happen overnight.”

Jaramillo emphasized that because of the cost of medical expenses, it’s important for students to be covered in the case of an emergency. The cost of emergency room visits has forced many people to file for bankruptcy as a result of high medical bills, Jaramillo said.

“It’s important that students are aware of their options as consumers so that they can enroll in quality affordable coverage that will prevent high medical debt if something were to happen,” Jaramillo said.

According to the poll, 85 percent of uninsured students would be willing to pay for insurance if it cost them $100 or less per month.

“Many students think access to SDSU Student Health Center is sufficient, but it’s not because it does not provide many services deemed essential,” public health associate professor Robert Seidman said.

Aside from representatives, such as Jaramillo and Ackerman, who are on 15 CSU campuses educating students on affordable health care, Zelman also recommended websites to get more information.

Zelman suggested one of two websites where students can obtain more information on affordable health care. Apart from the CSU website, which allows students to search for health insurance information, Covered California is a web page specifically for the organization handling the ACA in California.