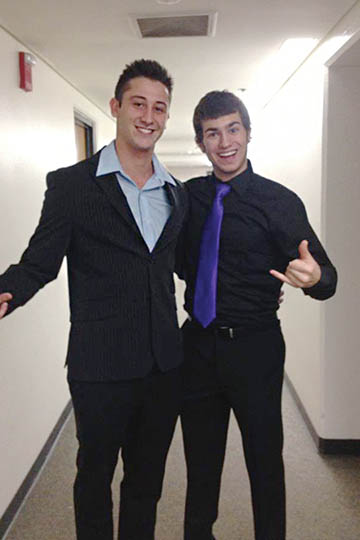 Tommy Reverand, a pre-business administration marketing sophomore and member of the Sigma Alpha Epsilon fraternity at San Diego State, died this past Monday.

The case is still under investigation and further details can’t be released at this time, Duran said. The cause of death has not yet been determined.

The SDSU Police Department has ruled out any possibilities of foul play and given the case to the SDPD, SDSUPD Capt. Joshua Mays said.

SAE organized a candlelight memorial service to honor Reverand’s life, held on Tuesday night. The vigil was on a grassy area between the Conrad Prebys Aztec Student Union and the Open Air Theater. More than 240 people confirmed attendance on the public Facebook event page.

The hashtag #RIPTommy has emerged on Twitter, allowing students to give condolences.

@JacquelineKarcz tweeted, “So touched and inspired by all the compassion and love there was tonight #RIPTommy.”
@popcarnes tweeted, “What a beautiful way to say goodbye to a beloved friend. #RIPTommy.”

“Thankfully we are all a part of a community that supports each other and lifts up those who are hurting,” Sundelius said. “I may have only met Tommy once, but from that moment up until now, I have heard great things about him. To some he was a best friend and a brother, to others he was a classmate and an acquaintance, but to all of us Tommy was and always will be our fellow Aztec. He will always be missed and he will never be forgotten.”

Both the SAE regional director and SDSU chapter president were not available for comment.

Student Life and Leadership Student Life Advisor Jordan Lewton addressed rumors that Reverand may not have been an active member of SAE.

“Whenever there’s a death of a student, somebody wants to place blame somewhere,” Lewton said. “It’s unfortunate that’s the focus of it, because no one’s really covered what kind of a person he was. I think that’s why students put together the memorial.”

Lewton said Reverand is on the current roster for the fraternity, but her department is looking into his status as a member. She said regardless of his active status, students still banded together in his memory, ignoring the debate to focus on honoring his life.

“I think they just thought, ‘He was a friend,’” Lewton said. “At the end of the day, who cares if he was a member?”

Reverand’s passing marks the second death of a member of the SDSU chapter of SAE in the past two years.

In April 2012, criminal justice junior Barzeen Barzanji, who was then-president of SAE, was found dead in the Phi Kappa Theta fraternity house. A candlelit vigil was also organized in Barzanji’s honor.

Several members of neighboring fraternities and sororities declined to comment, saying they couldn’t talk about the incident.

“It’s a touchy subject,” Lewton said. “It’s one of those things that people don’t really want to talk about.”