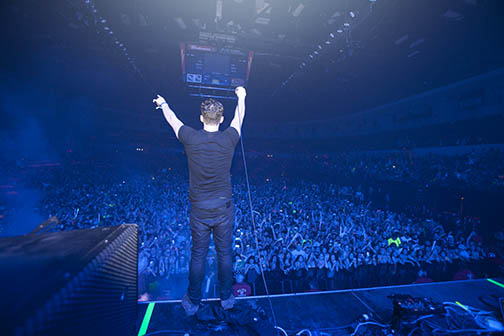 Over the years, LED has cultivated a culture in San Diego determined to bring the best and biggest names of EDM to a show near you. Starting in 2009, LED has grown to become a big name for must-see shows. Nothing highlights that more than last weekend’s LED Cali-takeover, with three simultaneous shows in three of California’s biggest cities. This past Sunday, LED held its first “Finger Lickin’” concert series in San Francisco and Los Angeles, along with its third anniversary show right here in San Diego. It’s apparent the guys at LED have huge plans for 2014, as the promotional company is slowly building its fan base outside the prominent San Diego area, providing high quality shows for the whole state to enjoy. LED has thrown its hat in the ring, so look out HARD and Insomniac. What’s next for LED? Maybe live streams on Sirius XM’s “Electric Area?” Come festival season, we’ll see what LED has in store for us.

If I had to pick one of the three lineups LED was offering across California this past Sunday, I would pick the artists performing at “LED Anniversary” ten times out of ten.

The perfect blend of experimental sounds, rising artists, and big names, there was a set for everyone to enjoy. LED resident DJs, FYOR and Mossberg Pump, clocked in early to work up the crowd, which led to an energetic start from Henry Fong. Blending hard-hitting bass lines with blaring synth chords, Fong set the bar high for the night. And that bar was demolished, as my can’t-miss duo, Firebeatz, took the stage next. With an explosive sound and intense energy, Firebeatz kept everyone up on their feet from start to finish.

Dannic and Ummet Ozcan took the stage to follow, keeping the energy flowing with some of the biggest electro house tunes. They set the stage for one the biggest acts of the night, as Adventure Club took to the decks. Unfortunately, the set was plagued with sound issues. Some drops were eerily soft and not as hard-hitting as Adventure Club had in mind. At times the crowds seemed exhausted, barely managing to keep their arms afloat in the melting pot of sweaty bodies and substances. But Adventure Club was able to save its set, reigniting the crowd with hit songs, “Gold” and “Crave You (Dubstep Remix).”

The trap festivities were enough to bring life back to the crowd, just in time for the shows biggest and baddest duo to close out the night, Showtek. Closing the night in supreme fashion, Showtek absolutely annihilated the crowd with its unparalleled festival anthems. It was impossible not to move as the duo played banger after banger of a track. To sweeten the deal, Showtek took to the mic at 4 a.m., just as the show was about to end, and promptly gave the curfew the middle finger and proceeded to drop the two legendary hardstyle hits, “FTS” and “Raver.”

Although I’m sure 90 percent of the crowd was unaware of Showtek’s worldly roots, the party never seemed to stop onShowtek’s watch. It was a legendary night that ended in sweet glory-an appropriate ending to LED’s third anniversary.

We can’t wait for what you have in store for this year, LED. Hopefully, there will be many more anniversaries to come.