Men’s basketball travels to The Pit 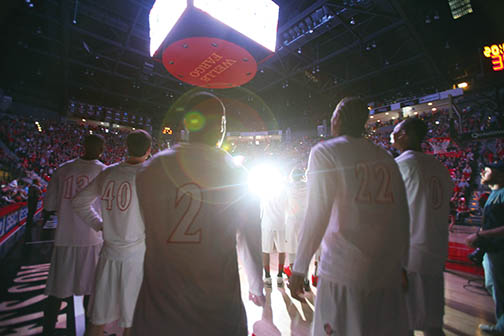 Those in charge of the Mountain West Conference scheduling should receive raises and promotions for pitting San Diego State against University of New Mexico twice in the final two weeks of the regular season.

Barring disaster, Associated Press No. 6 SDSU (23-2, 12-1 MW) and UNM (19-5, 10-2 MW) will likely end the season ranked first and second in the MW. And the two games between these rivals, falling on Feb. 22 and March 8, may decide who receives the coveted top seed of the MW Tournament in Las Vegas.

The Aztecs travel to The Pit in Albuquerque for round one between these two MW giants, airing this Saturday at 7:05 p.m. on ESPN2. SDSU sophomore forward Skylar Spencer has been looking forward to this game for a while.

Let’s see where the advantages lie:
Offense
UNM has a three-headed offensive monster that averages more than 32 minutes each game. It looks like senior forward Cameron Bairstow will battle SDSU senior guard Xavier Thames for MW Player of the Year. Standing at 6 feet 9 inches and weighing 250 pounds, Bairstow is a menacing presence down low and averages over 20 points per game on 57 percent shooting.

Redshirt junior forward Alex Kirk is another dominating presence, standing at 7 feet and weighing 245 pounds. Senior guard Kendall Williams, the reigning MW Player of the Year, plays more than 35 minutes a game and leads this Lobo offense, scoring about 17 points and dishing out five assists per game.

SDSU wins with defense—that’s no secret. Its offense has struggled during MW play, especially when Thames is off his game. However, sophomore forward Winston Shepard and junior forward Dwayne Polee II have recently provided some consistent offense. The Aztecs also have recorded 67 more offensive rebounds than the Lobos.

However, the Lobos click on offense more consistently than the Aztecs do.

Edge: Lobos
Defense
Viejas Arena runs a promotion where those in attendance when the Aztecs hold teams under 60 points can receive five free wings from Hooters. Wing-lovers rejoice: the Aztecs has held its MW opponent under 60 points for five straight home games. SDSU’s defense smothers its opponents with its full-court press, and then makes penetration nearly impossible with its length and size. You’ve heard all the stats: SDSU allows the third fewest points per game and fourth lowest field goal percentage nationally.

While UNM doesn’t stifle opponents’ offenses like SDSU, it rebounds very efficiently on defense. In fact, the Lobos have recorded four more defensive rebounds than the Aztecs. Bairstow and Kirk can prevent the Aztecs from recording many of their offensive rebounds and second-chance points.

SDSU would have the defensive edge over most teams in the country, though.

Edge: Aztecs
Intangibles
UNM and its fans believe the Lobos should be in the AP Top 25, and this game is their chance to get in. All 18,018 seats (that includes standing room) will be full at The Pit. The student section sits close to the action—they’re practically on the court—and they’ll make the game tough for the Aztecs. The Pit also stands at 5,312 feet. SDSU struggles in high altitudes. Case and point, SDSU’s loss at the 7,220-foot-high Arena-Auditorium in Wyoming.

SDSU has a lot of confidence right now and will have one more day of rest than UNM. But home-court advantage will play a key role in this rivalry.

Edge: Lobos
Prediction:
These two will split the season series. Round One: UNM 74 SDSU 71.