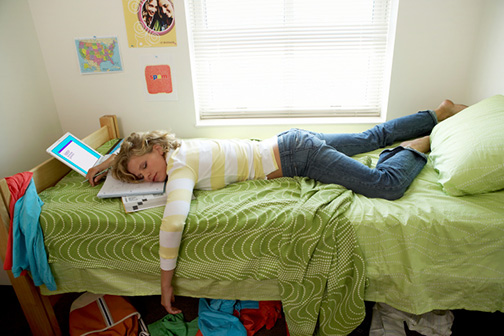 When I was in high school, my parents told me they didn’t want me to get a part-time job. Instead, they wanted me to focus on school and get good grades so I could get into a good college. Now that I’m a freshman here at San Diego State and I’m not only expected to work, but to take classes harder than any advanced placement courses I encountered back in high school. I know everyone is in a different situation, but while some students have scholarships or financial aid, most of us don’t have any of that.We have basically been thrown out into the world, told to live on our own for the first time and expected to know exactly what to do right away.

Throughout the years, the price of college tuition has risen dramatically, and there’s seemingly no way of stopping it. College students are forced to work part-time jobs while going to school full-time so they can actually afford to attend. And don’t even get me started on the job market. With the economy as it is today, college graduates are having trouble finding jobs at times and are forced to work in fast food chains or retail, even though they worked so hard for their degrees. [quote]A study in the New York Daily News reported that only 53 percent of graduates these days are finding full-time work in their field of study.[/quote]

Not only do students have to compete with actual graduates, but they also have to find employers who are willing to work with their class schedules. Then, at the end of each semester, employers have to be willing to completely change schedules as student employees register for new classes. And what about vacations? Are employers going to be willing to let us take a month off when we have to go home for winter break? The pressure this puts on students is ridiculous.

“My boss had to let me go at the beginning of this semester,” economics junior Elisa Weltch said. “I had a crazy class schedule and he just couldn’t accommodate it. And now I’m scrambling for a new job so that I don’t have to live off of my parents. They can’t afford it.”

When I sought out my parents’ advice on where to apply after being turned down almost everywhere I had applied, they told me to try and get a job on campus.[quote] What they didn’t realize was that 30,000 other parents told their kids the same thing. I applied to every on-campus position I was qualified for, before I even stepped foot on campus and still had no luck.[/quote] On-campus jobs are the prized possessions of the college community and many of us aren’t fortunate enough to acquire one. SDSU should be more willing to work with students by guaranteeing more positions. If they hired more students, they could be more flexible with schedules because they would have a larger number of employees able to fill the gaps.

“I’m a senior now and have applied to a total of 32 on-campus job opportunities,” hospitality and tourism management senior Josh Wiken said. “I only got hired once and it only lasted for a semester. Then they wanted new faces and I was kicked to the curb. There are tons of better-qualified kids here at SDSU and it really is nearly impossible to beat them.”

Thankfully my parents can afford to help me out. I can’t imagine what it’s like for the students who have to pay for their own food and rent. I know that, yes, it’s a hard time for everyone in America right now, but it’s an especially hard time for those of us just starting out. Here we are, thrown into chaos, scrambling to get a good education that might not even guarantee us a job after we get our prized degrees.

I wish I could say I thought we should lower college tuition so we actually have a better chance to learn and comprehend what we are being taught, rather than just taking the classes to get a degree. But as many of us know, with our economy as it is today that isn’t a possiblity. Someone has to pay for the faculty and the lecture halls right? So, I guess I will just wish you luck, my fellow broke college student.