The jury is still out on A.S. restructuring 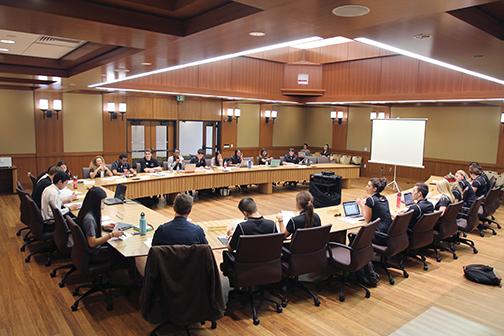 San Diego State’s Associated Students recent restructuring has sparked debate among some students and A.S. about the effectiveness of the new plan.

The series of amendments to the A.S. bylaws were implemented at the beginning of the fall 2013 semester. The primary difference was the creation of four new groups: the University Council, the Campus Life Council, the Judicial Affairs Council and the Board of Directors.

Before the restructuring, the four groups had been centralized into a single A.S. council, with the only other source of power being in the five member executive board. However, the sprawling legislative body was notoriously slow to act.

A.S. Vice President of External Affairs Javier Gomez said the new councils are specialized and focused. He said the restructuring was a five-year process that included research and discussion.

A.S. Executive Vice President Becca Cohen said she doesn’t have any problems with the new structure.

“I have definitely seen improvements to policies thanks to the current structure,” Cohen said.

While some A.S. members maintain that the structure has been beneficial for the organization and SDSU students, others disagree.

“The new system has some flaws,” Abdinur said. “With the different boards and councils it is difficult to have a unified discussion. The long period of time between council meetings means that it is difficult to discuss student issues.”

Abdinur also said the restructuring has made some processes convoluted.

“The new structure creates a challenging system where resolutions have to pass through a series of councils before they are brought to a committee that is capable of making a substantial decision,” Abdinur said.

“Last year, we were told that with the restructuring, EOP would have more representation,” Sanchez said. “But we have never had anybody sit on a board or council.”

In the past EOP student advisory board has experienced difficulty applying for funding from A.S., Sanchez said.

“The time it takes for funding has not changed since last year,” Sanchez said. “It still takes over two months to get funding, which makes it hard for us to organize club events.”

The A.S. restructuring has not solved problems such as these, Gomez said.

Sanchez pointed out that EOP is a relatively new organization, and there is a lack of support for new clubs.

Student-at-Large member of the A.S. Board of Directors Jessika Seekatz said she foresaw issues in the first year of the restructuring, but also expressed concerns for its future implications.

“Right now, one of my biggest concerns is the way that boards are isolated from each other,” Seekatz said.

The isolated boards are one of the reasons why the organization might be experiencing some first-year difficulties, Seekatz said.

A.S. President Josh Morse said he see no issues with the structure as it stands now.

“As we progress through the year, we may find areas that could be improved,” Morse said. “Those changes can be made via bylaw amendments. We are always looking forward to making A.S. better.”