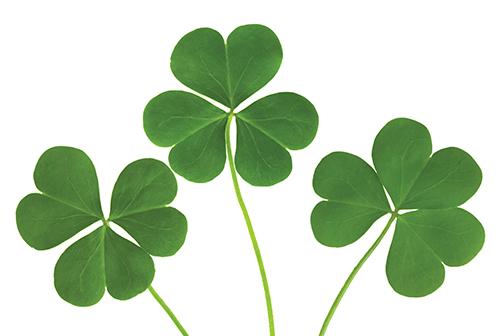 Emerald. Lime. Jade. Whatever shade you prefer, it’s time to break out the green. For those of Irish descent and those who use the day as an excuse to chug beer while donning leprechaun hats, St. Patrick’s Day is this Monday. Now it may not be ideal for the biggest springtime bash to fall on a weekday, but lucky for you (pun intended), the festivities will be in full swing starting this weekend. So break out your “Kiss Me, I’m Irish” T-shirts and prepare for a nonstop party at one of these events that is sure to start your celebration off right.
For those 21 and over:
ShamROCK, Saturday, March 15—The 19th annual music festival block party blowout starts at 4 p.m. and ends at midnight, leaving plenty of time to roam the 150-foot pub while listening to live Irish bands and DJs. Irish dancers and bagpipers will perform in addition to San Diego’s own Irish rock band, The Fooks. General admission tickets are $40 and $45 the day of the festival.

Irish 4 A Day, Gaslamp Quarter, Saturday March 15—From 2 p.m. to 2 a.m., partygoers can visit 18 different nightclubs and bars without a cover charge, complete with 11 “welcome shots” at San Diego’s most popular bars. This party train promises leprechauns and Irish fairies that lead you from McFadden’s to Stingaree nightclub. Tickets are $49, with VIP options available and a promo code that gets you $5 off admission if you purchase before the day of the event.
For those not into the bar scene:
St. Patrick’s Day Parade and Irish Festival in Balboa Park, Saturday March 15—The 34th annual parade presented by the Irish Congress of Southern California starts at 10:30 a.m., with more than 120 entrants and thousands of attendees. Be on the lookout for floats, marching bands, police and fire department units, bagpipe players, dancing groups, the parade’s iconic Smiling Irishman and more. This year, the theme is “celebrating people in public service.” Afterward, head on over to the Irish Festival for food, craft booths and two beer gardens to keep the adults happy. Live entertainment at the festival’s stages from 11 a.m. to 5:30 p.m. features folk singers and folk singing groups. Stop by the Celtic Village and be transported to the year 1582 to learn a little about renaissance history. The entire event is free to the public.

St. Patrick’s Day Parade and Festival, North County/Downtown Vista, Sunday, March 16—Set in Vista’s historic downtown area on Indiana Avenue and Main Street, the parade kicks off at 11 a.m. for its third annual celebration. The festival lasts from 10 a.m. to 4 p.m. and showcases vendors and entertainment from cities in North County. There will be children’s crafts and activities for the kiddos.
For those who want to party Monday:
710 Beach Club’s 24 Hours of St. Paddy’s Day—This celebration has musical entertainment, their “Party Like The Irish” bikini contest, food and drink specials—and they even promise a leprechaun to make an appearance at the minibar. Plus, 10 chances to win $10,000 with five qualifiers chosen each day. What’s better than rolling in the dough on the luckiest day of the year?

Titled Kilt Pub and Eatery at Mission Valley—Known for its scantily-clad waitresses, this eatery has drink specials all day and a beer garden starting at 2 p.m. DJs will provide live entertainment, followed by Claddagh Irish dancers, bagpipers and a leprechaun. Patrons can even purchase a $3 shot of “good luck”—whatever that is.

Effin’s Pub and Grill—The party lasts from Sunday to Monday with bottomless food, green beer and mimosas for $20. Then starting at 4 p.m. on the hour, every hour, on Sunday (the official start of St. Patrick’s Day in Ireland), Jameson Irish Whiskey specials go for $3. Want to get an early start come Monday? They’re open at 6 a.m.

Whether you find yourself at a bar or scarfing down traditional favorites such as shepherd’s pie or corned beef and cabbage, may the luck of the Irish be with you as you celebrate yet another holiday you don’t know the meaning of. Besides, who is St. Patrick anyway, right?