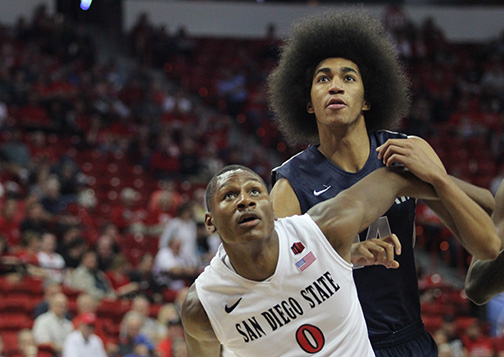 Arguably their best effort of the year, the Aztecs outplayed USU in every facet of the game. The red-and-black outrebounded the Aggies by eight, turned the ball over seven fewer times and stole the ball seven more times than USU. SDSU also dished out a season-high 19 assists compared to USU’s six assists. The Aggies usually average a little over 16 assists per game, ranking 12th in the nation.

USU Head Coach Stew Morrill told reporters after the game that SDSU was simply too good to beat.

“San Diego State just takes you out of everything you’re trying to do,” he said. “Their defense was just so outstanding. Give them all the credit.”

Senior guard Xavier Thames led all scorers with 15 points, including three 3-pointers in a row late in the first half. Possibly more impressive were Thames’ seven assists—sometimes as the Aztecs as a whole barely reach seven assists.

“We were moving the ball,” Thames said regarding his passing performance. “It was the flow of the game. We played a great offensive game.”

Sophomore forward Winston Shepard played an efficient game, scoring 13 points on 50 percent shooting. His biggest contribution, though, was his presence on the offensive boards. He pulled down three of SDSU’s 10 offensive rebounds.

“They’re probably the best we’ve played all season long,” he said. “Between them and New Mexico, I think they’re the better team.”

SDSU will look to back up that statement tomorrow against the University of Nevada, Las Vegas at 6 p.m. PT on CBS Sports Network and The Mighty 1090.