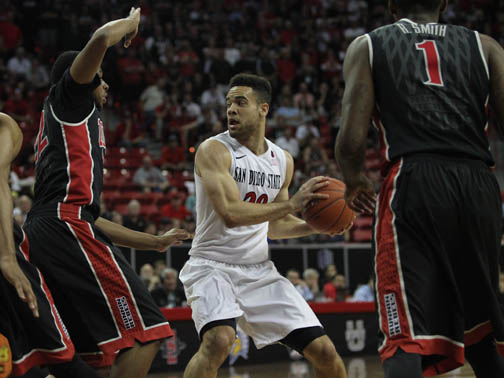 The two sides battled back and forth during the first half and the Aztecs entered the locker room leading 29-24. However, starting with 16:18 left in the game, SDSU went on a 12-0 scoring run to take control of the game, leading 45-31.

Redshirt senior Xavier Thames played his second consecutive game with 15+ points and 5+ assists, scoring 17 and dishing out six assists. As he has all year, SDSU Coach Steve Fisher raved about his senior point guard after the game.

“(Xavier) has delivered for us every game,” he said. “If there was a better guard in America, I’d like to see him.”

As good as Thames was, SDSU’s player of the game was without a doubt junior forward Dwayne Polee II. With a team-leading 18 points, six rebounds and three key steals, Polee delivered a spark off the bench and earned every one of his 27 minutes. The Mountain West Conference Sixth Man of the Year winner  has consistently been one of SDSU’s best players as of late. Since SDSU’s loss at the University of Wyoming, Polee has averaged 24.3 minutes, 9.8 points, 4.2 rebounds and 1.6 steals per game.

Fisher told the media that he sees Polee as much more than a bench player.

“He’s our sixth starter, really,” Fisher said. “And we count in him energizing the team when he comes in.”

The Aztecs stopped any UNLV comeback with their presence on the offensive boards. In fact, SDSU grabbed 13 offensive boards, almost half of the Rebels’ 29 total boards. Those offensive rebounds led to 11 second-chance points.

“I can’t think of a team across the country that’s better on the offensive boards,” he said.

The Aztecs will face either Boise State University or University of New Mexico tomorrow at 3 p.m. Pacific Time in the Mountain West Conference Tournament championship game.