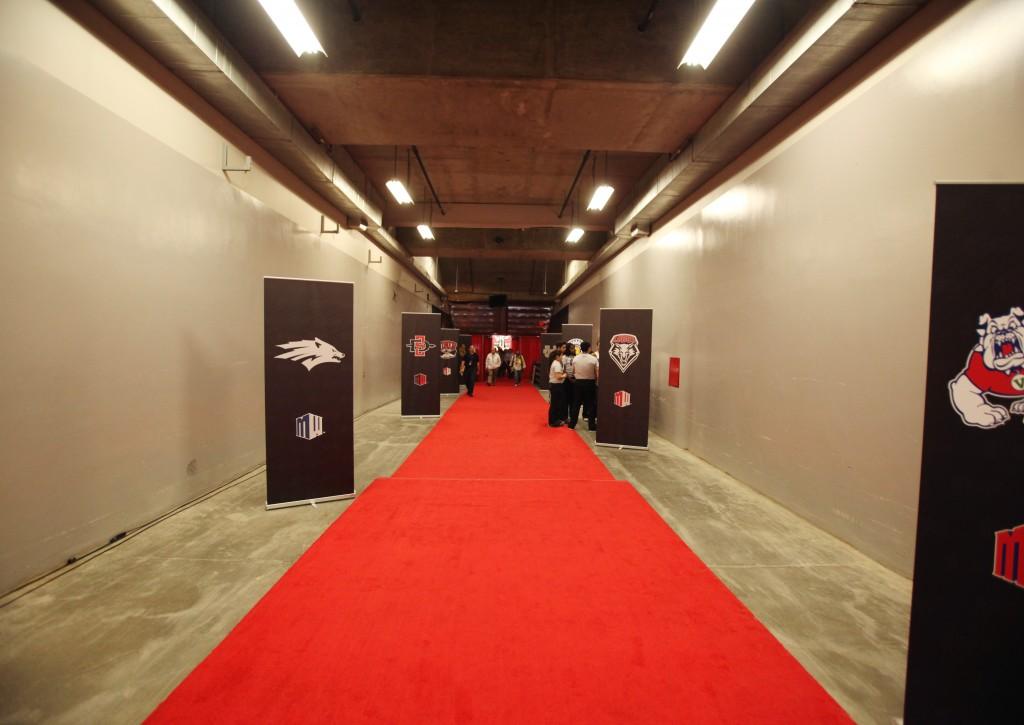 Alright. It’s Saturday night and I’m sitting here in my hotel bed writing this column with a stunning view of the Las Vegas Strip out the window to my left. I just watched my fifth college basketball game in three days from a front-row seat on press row, free of charge. And I traveled to New York City last weekend as a representative of KCR College Radio’s sports department. Great, right?

Okay. It’s Saturday night and I’m sitting here in my hotel bed wondering when I’m going to study for my two midterms on Monday. I’ve spent only a couple hours on the Vegas Strip because I’ve been working on an assignment for JMS 310W, writing for The Daily Aztec and covering SDSU basketball for a Mountain West Conference blog. Not so great, right?

A lot of people ask me what it’s like to be a sports journalist, especially one covering SDSU men’s basketball. Well, let me tell you right here, right now: despite any difficulties like the ones I just mentioned, being a sports journalist at SDSU is absolutely incredible—every second of it.

I began this year covering SDSU football. I’d watch games from the press box, take the elevator down into the innards of Qualcomm Stadium and walk past the teams’ locker rooms to access the press conference room. Even if I hadn’t watched the game, I’d have known who won just from looking at players I walked by. Those who won happily bounced through the hallways, whereas those who lost plodded along the dark blue floors and avoided eye contact.

When it came time to write the football special issue, my editor arranged an interview with quarterback Quinn Kaehler through SDSU Media Relations. A few days later, I met Kaehler in the Fowler Athletics Center. Wearing a gigantic chunk of ice on his shoulder, Kaehler gave me a great interview and I had a blast writing his profile.

After football season ended, I was assigned to the men’s basketball beat. Oh boy, I didn’t understand the word “busy” until I began covering SDSU basketball. Games, press conferences, previews and recaps. As soon as one ends another begins—but don’t get me wrong, I love it.

Let me tell you, there’s a whole other world in Viejas Arena behind the scenes. Media members are fortunate enough to see this world. We enter the arena through a door located in what used to be the Aztec Bowl. We immediately encounter what looks like a miniature version of a Costco: dark gray concrete floors and industrial ceiling lighting. We get our bags checked and receive our press passes. There’s a media room to our right if we want some room temperature water (which, I must say, I enjoy more than ice-cold water). We walk past a rolled-up  banner of “The Show” and the rehearsing cheer squad and dance team. Finally, we walk out into the bright lights of Viejas. We hear the pop songs boom throughout the arena’s speakers. We look to our left and see “The Show” slowly grow until tip-off. We find our seats on press row, say hi to familiar faces, open our laptops and set up our Twitter pages.

Sitting in press row gives us a game experience different from what fans encounter. As we’re so close to the action and away from the noise of a student section, we can hear a lot of what players and coaches say. We can see sophomore forward Winston Shepard smile brightly and laugh after playfully trash-talking an opponent. We can hear the players shout, “And-one!” when they believe they’ve been fouled. We can see sweat fall to the floor from players’ chins.

After the game, we walk up the stairs to the mezzanine level and talk to SDSU Head Coach Steve Fisher and certain players. After several games, we learn players’ character traits: redshirt senior guard Xavier Thames is very soft-spoken, Shepard is very quick to volunteer a response and junior guard Aqeel Quinn is a super happy guy—always smiling.

Now, as I mentioned earlier, covering sports isn’t sunshine all the time. I’ve spent a lot of my Saturday nights this year during the football and men’s basketball seasons in front of a computer writing game recaps until the wee hours of the morning when parties around me have all ended. Luckily, I’ve never pulled an all-nighter. I once stayed up until 5 a.m. writing an SDSU football 2014 recruiting class breakdown for the MWC blog I write for, but that’s the closest I’ve come.

But man oh man, it sure is sunshine a lot of the time. As previously mentioned, I traveled to NYC on behalf of KCR College Radio, and now I’m in Las Vegas as part of The Daily Aztec.

While in Vegas, I’ve made numerous connections with sports journalists from across the conference. I’ve spent whatever free time I have relaxing and drinking Diet Pepsi (yes, diet—it tastes better) in the enormous media rest area. I’ve walked down the huge red carpet with MWC team banners lining either side out into the Thomas & Mack Center in Las Vegas. I’ve heard the noise of Aztec fans, Lobo fans, Rebel fans and fans from the rest of the MWC all combined into one 19,522-seat arena.

As wonderful as opportunities like traveling to Las Vegas and NYC are, I’ve quickly learned that things don’t always go your way as a sports journalist. For instance, we tried to get a one-on-one interview with a men’s basketball player for this special feature, but SDSU Media Relations said no. We tried some more, but they still said no. As a result, you’re reading about me instead of Xavier Thames or junior forward Dwayne Polee II. But that’s part of the business, and one has to learn to adapt. So that’s what you’re reading, folks: an adaptation.

Now it’s time to gear up for the NCAA Tournament and whatever comes next. I absolutely can’t wait. No sleep, no problem: this is sports.