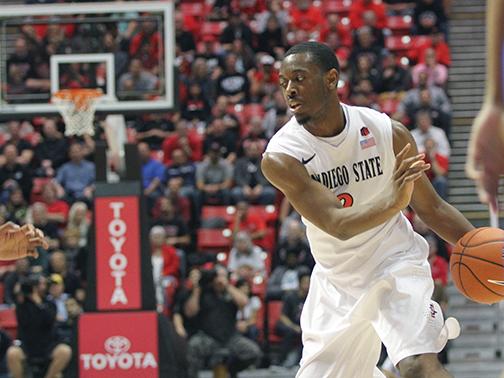 It might not be a winning equation for a deep run into the NCAA Tournament, but team defense plus Xavier Thames’ explosive offense led the San Diego State Aztecs (31-4, 16-2 Mountain West) to dominate the North Dakota State University Bison (26-7, 12-2 Summit) 63-44 and advance to the Sweet 16 in Anaheim.

Many sports pundits picked NDSU to upset the Aztecs in Spokane. When the score was knotted up at 20 with four minutes left in the first half, it seemed like those pundits could be right. However, SDSU ended the half on a 10-3 run and thoroughly outplayed the Bison in the second half.

NDSU entered this game with the nation’s best field goal percentage, just below 51 percent. However, the Bison hadn’t played a defense like SDSU’s, and the Aztecs limited the explosive offense from Fargo, N.D. to less than 32 percent from the field. NDSU Summit League Player of the Year senior Taylor Braun scored just seven points on 14 percent shooting. Senior forward Josh Davis said his team’s cooperation on defense led to the success.

[quote]“That was just a great team effort,” Davis said after the game. “Everybody stuck to their assignment, but we have been working hard, preparing for it. So, I’m just glad we were able to stick to what we planned on doing.”[/quote]

Now let’s discuss the offense—or, rather, Thames and a little bit of junior forward Dwayne Polee II. That’s about it.

Of the eight players head coach Steve Fisher played 10 or more minutes, Thames and Polee were the only ones to score more than six points. Thames had a remarkable game, scoring 30 points on 47 percent shooting with five assists. In fact, he set an SDSU record for points in an NCAA game. And when Thames didn’t put it through the hoop, Polee did, netting half of his teammates’ points with 15 on the night.

SDSU’s offense lacked variety: In almost every half-court offensive sequence, Thames ran a pick at the top of the key and either created a shot for himself or dished it to Polee for an open shot. But one can’t knock the strategy too much—it worked. The Bison simply couldn’t stop the senior Aztec guard. Thames gave a lot of the credit to his teammates.

[quote]“It wasn’t just me; it was my teammates getting me open, us playing team defense,” Thames said. “But I did feel pretty good coming into the game, but without my teammates I wouldn’t have had the game I had.”[/quote]

Now, there are a couple negative aspects to look at as well.

Sophomore forward Winston Shepard really struggled against NDSU, forcing shots and passing into lanes that were far from clear. Fisher played him only 15 minutes, as opposed to Polee’s 30 minutes off the bench. Although, as Fisher has said several times, Polee is not a bench player. He’s SDSU’s sixth starter and often plays with the last unit on the court.

Like it or not, Thames and Polee won’t score like they did against NDSU every game. If the Aztecs want to make a deep run, players like Shepard need to get into a rhythm and step up on offense, too.