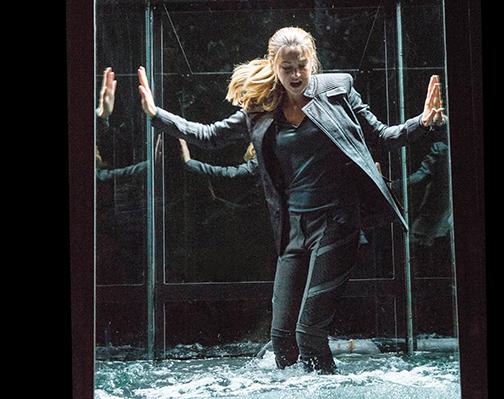 Veronica Roth is the latest female author to join the young adult book-to-movie production line. Fans are eagerly anticipating the adaptation of the first novel in the trilogy “Divergent,” but does it sway toward the epic victory of “The Hunger Games” or does it fall short into the category of “The Host?” Alas, it can be found somewhere in the middle.

Chicago can no longer be classified as the “Windy City” in this dystopian postwar universe; instead, the “crumbling city” sounds much more appropriate. The city is split up into five factions with each faction symbolizing a certain virtue. At the age of 16, every citizen has to choose which group they want to be a member of for the rest of their lives.

A “personality quiz” beforehand gives the teenagers a little nudge on which faction they should join. Beatrice “Tris” Prior (Shailene Woodley) is faced with the choice of staying with her parents in the selfless Abnegation faction or becoming one of the rebellious and brave Dauntless. Her decision is even more difficult to make when she discovers a touch of bad news during her aptitude test that she is a Divergent-in other words, she doesn’t belong in any of the groups. In fact, Jeanine Matthews (Kate Winslet), from the knowledgeable Erudite faction, is killing off Divergents one by one, as they are seen as a threat to the categorized society.

The plot itself does hold potential. However, the biggest problem with “Divergent” is if you have watched previous dystopian silver screen epics, or if you watch motion pictures in general, you already know how the story is going to end. It’s extremely predictable. Just like “The Hunger Games,” there is a slight edge to the film as it does attempt to push boundaries by focusing on the responsibilities of children, as it’s not every day that 16-year-olds have to choose between factions and blood after all. But sadly it doesn’t even come close to the impact of Suzanne Collins’ brainchild.

Another frenzied young-adult saga that cannot be left out here is “Twilight.” Woodley recently slated Stephenie Meyer’s series for portraying an irresponsible romance, but the fragile new girl on the scene falling for the brooding guy is the exact same love story told in “Divergent.” Tris and her onscreen boyfriend Four (Theo James) don’t share the same wistful romance as Bella and Edward, but their chemistry does make the flick a tad more interesting from the moment Four helps Tris off a trampoline (yes, this is Tris pushing herself to her limits-not exactly as strong as Katniss Everdeen).

“Divergent” may not add anything new to the dystopian romance scene of the moment, yet fans of the novel will no doubt enjoy this big screen adventure. It’s also clear that “Divergent” is a box office success as the next two books have already been purchased for adaptation.