Arizona storms back to beat Aztecs 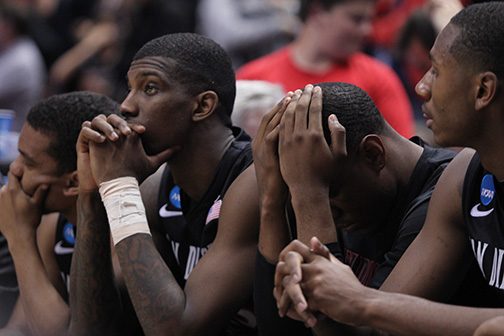 In probably the most stressful game of the season for University of Arizona and San Diego State University fans, the Wildcats came out on top 70-64 in the Sweet 16 in Anaheim, Calif.
Arizona will now face the University of Wisconsin on Saturday in the Elite 8.
Redshirt senior guard Xavier Thames played incredibly in his last game as an Aztec, netting 25 points.
Junior sixth starter Dwayne Polee II had another great performance off the bench with 13 points and two steals.
Senior forward Josh Davis grabbed as many boards in the first half as the entire Arizona team and ended up with 15 on the night.
But Arizona’s freshman forward Aaron Gordon and the timely shooting of sophomore guard Gabe York and junior guard Nick Johnson proved too much in the end of the second half for the Aztecs.