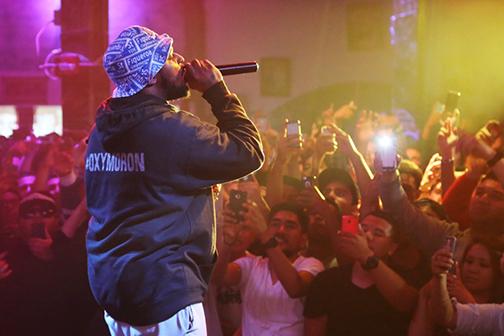 After a string of opening acts, Vince Staples came on around 9 p.m. Staples spent the beginning of his set pumping up the crowd, playing rap hits like “Drop It Like It’s Hot” by Snoop Dogg to get an upbeat vibe going. He played songs off of his latest mixtape, “Shyne Coldchain Vol. 2,” with a good amount of banter in between. For Staples, it seemed like another night on stage as he held a casual demeanor.

For reasons unknown, Isaiah Rashad was a no-show. The host DJ played rap hits to keep the crowd busy and satisfied. The stalling worked for a while, but boos were heard from the impatient crowd after about an hour. Finally at around 10:30 p.m., a DJ from the Top Dawg Entertainment camp appeared on stage and started to prep for Q’s set.

Before Schoolboy Q began his set, he thanked his fans for helping “Oxymoron” became the No. 1 album in the country and selling out every Oxymoron show. It was a sincere gesture for the crowd who had to stand through the unfortunate delay. Then, Q serviced fans with “Hands on the Wheel,” an older song from his major debut “Habits & Contradictions.” The crowd immediately roared in response, singing through everything—even the sampled chorus.

The majority of Q’s set featured songs from “Oxymoron.” Although the album has been out for only a few months, the crowd knew every single word to the new tracks. Even for the earlier material, especially “Druggys WitH Hoes Again,” fans helped Q finish multiple verses. Q returned the favor to devoted fans by performing his feature verses, including A$AP Rocky’s “Brand New Guy” and A$AP Ferg’s “Work.”

Q ended the show with “Man of the Year,” and the crowd took in the last song with high energy. As the crowd began to exit the venue, Q returned for an encore with “Los Awesome.” As soon as the fans heard the beat start, many rushed back inside the venue to catch Q one more time. It’s safe to say that fans left the Schoolboy Q show fully satisfied.